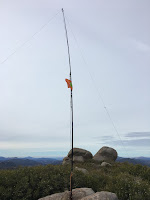 Today’s destination was Sheephead Mountain (W6/SD-020 - Sheephead Mountain).  This is my first SOTA for 2018!!!  This was a difficult activation hiking wise for me but doable and I could do it again.  I was the first to activate this SOTA location, making 2 for my total first time activations.  I received an email last night from Adam, KJ6HOT saying that we was thinking about doing this location but after seeing my alert on the SOTA site (you post alerts for when you will activate so that “SOTA Chasers” can get points too), he decided to do another site.

Learning from my recent experience of trying to get to Poser Mtn, and Chaquito, I spent more time researching this before setting out.  Alltrails.com was a huge help.  Someone else had recorded their track and published it to Alltrails, giving me something to start with.  (I did the same for others plus I wanted to publish here).  I used technology to its fullest and leveraged satellite imagery, Google maps, etc to verify that there were roads, and trails and how to get there.  I have some topo maps but I’m not sure they cover that area and in today’s world, you can print what you need (or download to the phone).  You can see the trail via the satellite image so I felt better about not having to bushwhack for most of the trip.  However, the last .2 miles looked like it left the main trail or dirt road.  The satellite image showed a possible trail so I had hope.  This hike had been done before so I felt I would attempt it.  One curious thing is that the ascent looked like it attacked the steepest part. The person had dropped a way-point where their track left the road, so I measured and it was .2 miles.  Off I go with lots of gear (too much) and hope for a good activation. 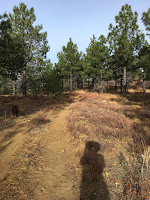 I was looking forward to hiking in the pines.  I was really getting tired of the scrub and rock piles we call hills or mountains around San Diego.  The first part of the trip was easy going and in the pines.  It reminded me of Alpine AZ a bit and it was pleasant.  It was an easy trail and by downloading the Alltrails track from the other person, I had a really good reference (and topo) since it would overlay my position with their track.  I printed a map but forgot it at home.  I depend on my phone GPS and I do have a spare power pack that I take with me.

When I reached the turn on the previous track, I started up the ascent.  Hurray, there is a small trail here.  Bummer, we’re leaving the pines and climbing into horrid chaporall like we have everywhere else.  I lost the trail at one point and had to double back to find it again.  I cheated and used the GPS.  The SOTA dog was not happy with me.  This trail almost looked like it was maintained and cut.  It was narrow but mostly cleared of chaporall although I took a bit of damage on the shrubs.  Without a trail, I wouldn’t have been able to make it, the chaporall was super thick.  There were a couple of parts where you had to climb over a boulder but not bad.  There was also a couple of sections that were at about 45 degree climb making it difficult... 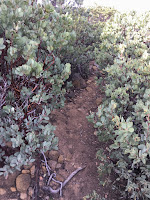 Oh, I forgot to mention, I forgot my poles at the car.  To say I was a bit bummed would be an understatement.  I really needed them on this hike but was able to find a couple of sticks big enough to be a stand in.  I got lucky since most of the dry sticks on the chaparral here are too small.  Plan on making your own hiking poles or bring some if you do this mountain.  All in all, I would say the hike has a difficulty of “High” on my scale.  I would actually do it again but it would take some convincing.

Once at the top, I found a geocache that someone had left.  I signed the visitor log and then looked around for a good place to setup the HF antenna.  I brought the dipole today as I didn’t feel the vertical CHA MIL was ready for action yet.  I needed something that I could absolutely depend on since I wanted to nail this.  Someone had left a metal fencepost up there so I jammed it between some rocks and strapped my mast to it.  I fought through the scrub to tie off the guy lines and because the wind wasn’t blowing I didn’t need a third.  I really like that my paracord is about 50’ each, it allows me to tighten the guys without having to climb all the way over to the tiedown. 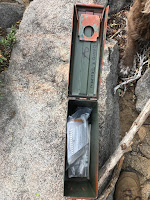 While I was setting up, Adam Kimmerly (KJ6HOT) called me on VHF.  I told him I’d be monitoring 146.520 when I got up there, so I had a QSO for the logbook before I had even started.  146.520 is the national simplex calling frequency (think of it as channel 19 on your CB).  I usually monitor it when I get on top and I use it to call CQ when I need to.  He was in Laguna meadows clearing some trail so not too far from me so he was just checking in to see how I was progressing.

Today, I brought along a roll-up jpole antenna for my HT/VHF.  If you look closely at the image at the top, you can see it attached to the mast where the flag is.  I bought it because I figured it would be light and give me a little better chance of getting out on VHF with my walki-talki if I got into trouble.  I was able to test it with someone but but it didn’t really make a difference.  Because I was on-top of the mountain, pretty much everyone had line-of-site on me.  I did a quick test to see if I could hit my house base station so I called my daughter and had her turn the radio on.  I was 40 miles out and came through loud and clear.  I have a Diamond 50X on the roof so that definitely helps.  I also hit the Palomar repeaters that were possibly 45 miles away.  I want to do some more testing with the jpole at another time. 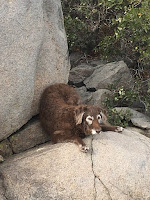 Once I was up and running, I did a low power SWR check on the radio and noticed that it was over 2.5.  The only thing that I could figure is that the terrain and the more steeply sloped the inverted V was affecting the SWR (which is normally 1.2 for that antenna).  I hooked the MFJ auto-tuner up to the radio and had the antenna tuned to under 1.5 in a jiffy.

It was a beautiful day, with a high overcast and about 70F.  I took my time setting up and enjoying the day while Sulu, the SOTA dog, took a nap.  The frequency I chose was busy so I went up .5 and called CQ.  I easily collected enough QSOs to log the activation and then some. I was expecting some really long range contacts given my location, but the best I had was 2,300 to Victoria, BC, which was to the side of the antenna.  The rest of the contacts were around Texas, Ohio, and Kansas.  Most of my contacts reported a minimum of 5/8 to 7/9+, so the rig was performing well.  I was booming into Texas without a problem so I was hoping for contacts a little further out.  No big one, I enjoyed the time on the rock talking with people that were freezing their butts off.  The only bummer on the HAM side was that I was late in setting up so I probably missed the chasers.  I did get one however. 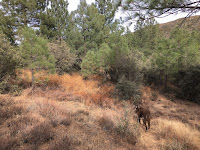 The trek down the mountain was definitely easier than the ascent and I was really glad I had made a couple of poles to stop myself from doing an endo on the really steep parts.  Whereas the dog followed me on the way up, she was happy to take the lead.  I will definitely remember my poles next time.

You can click on the image of my track that I recorded or you can find it here.

I didn’t run into a single hiker after I left the car so that was a nice break from the crowds at the local hills.