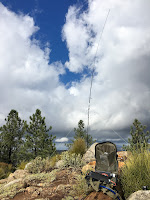 Today’s activation of Los Pinos Mountain (W6/SC-048 - Los Pinos Mountain) was supposed to be easy.  So easy in fact, I was planning on driving over to Iron Mountain to activate that one and get a good hike in.  Actually it was easy but it was cold and windy with snow.  I got a late start this morning which turned out to be fortunate luck.  I knew there was a forecast for rain in the AM so I wasn’t in a hurry.  Turns out there was rain, hail, and snow.  Yes snow.  It was also windy, and it was cold as hell.  With a temp of 35 (possibly lower), and wind at 20 mph, the wind-chill factor brings it to 24F.  Although really not that cold, when you are from San Diego, it’s cold.  Given the wind, it made for a difficult time holding onto the logbook and talking.  I’ve really got to get my headphones with VOX working. 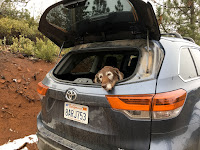 On the way up, I actually pulled off the freeway  into a small exit in light snow getting ready to scrub the mission, but it actually started to clear out.  I decided to go to the ingress point and wait if needed.  The start was a good 20 minutes off the freeway with a steep climb up the mountain.  There was still a little bit of snow coming down but it looked like it was going to blow out.  I asked Sulu what we should do and she said we should wait it out.  After a few minutes, we were enshrouded in clouds, then the snow stopped just a few minutes later (I should listen to the SOTA dog more often).  I made a quick contact to the house with both the car radio and the HT that I was carrying (a Yaesu FT-2DR HT).  Mari Lu could hear me loud and clear and she sounded perfect.  The direct distance from the house to the mountain is 35 miles.  Not bad.  I put some more layers on, gloves, and saddled up. 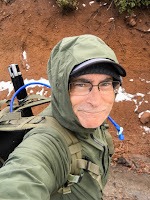 The hike from the parking spot to the radio position was short and easy.  Setup of the MPAS antenna was pretty easy too.  The guy lines weren’t tangled this time and I decided to use the screw on the spike to put the counterpoise in (something you do when you forgot to put it on at the beginning).  This is actually a better place to put it.  My only problem was doing stuff with gloves on in the wind.  This trip was a good test of my cold winter gear.  I had 4 layers, a beanie, a hat, and I pulled the hood from the shell over my head.  I was warm while walking, but standing around I chilled a tad.  Had the hike been longer, it might have been a challenge to find the right balance after sweating on the way up the mountain.

I quickly made a contact with a guy in La Mesa (part of San Diego) who was in a contest.  He asked if I’d mind jumping up to 21.4 (14 meter).  I’m guessing multiple bands was part of the contest.  I I had been using the dipole,  I wouldn’t have been able to do this but the Chameleon antenna was no problem, even without a tuner attached.  We talked for a minute and I went on my way.

There was a big contest going on this weekend but I found an open frequency and then did a self-spot with APRS from my walki-talki (hams call it a handi-talki (HT)).  About a minute after that I was off and running with a small pileup.  When traffic died down, I didn’t hang around long as I was cold.  My operating position was comfortable but I was directly in the wind.  I could have put my back to the wind behind that log, but then it would have been blowing into the mic.   I had no cell service at my operating position but if I moved a few yards to the east it worked fine.  Must have been all the antennas up there.  My longest contact was VA2MO in Quebec, 2,500 miles away.   But I wasn’t done... 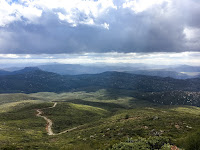 As I was just leaving, I heard a guy on my HT calling CQ on the nation-wide calling frequency for 2m.  KM6OIN, Garret, was on W6/CT-012 - Waterman Mountain, north of Los Angeles.  It’s  approximately 140 miles from me!  He was doing the VHF contest using a walki-talki like mine at 5 watts.  One small difference was that he was using a directional antenna for satellite and long distance communications from Arrow.  It was probably this model.  He came in super clear.  This is my first VHF/FM summit to summit contact.  Pretty cool.   I’m going to have to play around with a directional antenna like that some time and try using satellite comms.

By the time I started my exfiltration, it was going to be too late for another SOTA summit over at Iron mountain so I stopped at my favorite place in Descanso, Veronica’s kitchen.  Mmmmm.

This was another good test of the CHA MPAS antenna and it was nice to be in the winter weather even though it was a tad difficult.  Tomorrow is El Cajon Mtn., and I’m told it’s a difficult hike.  I’m looking forward to it.