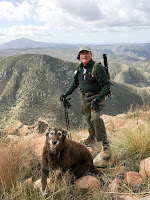 Today was final redemption day.  I went back to Eagle Peak (W6/SC-156 - Eagle Peak) with a working radio and completed my “activation”. Once I completed that, I headed over to Stonewall Peak (W6/SC-029 - Stonewall Peak) to get a second peak and activation in.  I had planned to do this as I always wanted to do a double.  I had the day off for Presidents Day so why not.

I was itching to get back to Eagle Peak to complete what I started Saturday and tick a new summit off my list.  As I mentioned in my previous post, I drove 1.5 hours to the start of the hike, hiked 2 miles to the top of the mountain, setup my equipment, plugged everything in and then realized I was missing the power cord for the radio.  I left it on the workbench at home.  I aborted the second summit that day.  This trip was all about checking that mistake off the list and working to see if I could get two activations in one day. 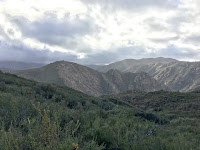 I was watching the weather forecast closely.  The forecast was for snow and rain in my area of operations when I checked Sunday morning with clearing forecast Monday morning.  The forecast started back off that prediction Sunday night so there was hope.  When I looked out the window from our bedroom Monday morning, (you can see a hundred miles to the mountains from there), it looked very questionable.  I loaded up at 6:30AM and headed out anyway given the forecast showed it would clear throughout the day but possibly rain / snow later in the day. 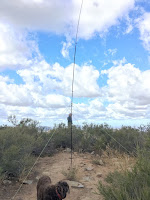 As I drove up, I listened to some guys on the Lyons Peak repeater and a ham just east of Alpine mentioned slight drizzle.   There was light drizzle on the way up the freeway but it looked like it was going to blow out.  I exited the freeway, made my way over to Boulder Creek road that would take me to the parking lot.  There was very pretty light snow coming down.  By the looks of it though, it would blow out of the area pretty quickly.  As I dropped back down and got into the parking lot, it was blowing and drizzling rain.  I decided to wait for it to blow out of the area and I didn’t have to wait more than 15 minutes.  There were a couple of other cars there waiting to hike to the Three Sisters Falls (I’d like to check them out sometime).  As soon as the weather broke, we all hit the trail.  There were a couple of guys in gym shorts and very light jackets.  They were cold!  They told me they were expecting warm weather.  Obviously they didn’t check weather forecast for Descanso. 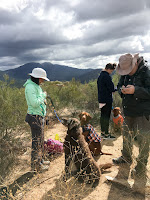 It was a bit windy and cold.  I put on four layers and my heavy gloves.  After about a mile, I removed a layer and switched to the light gloves which I eventually put away as things warmed up.  It was a very pretty morning, the ground was a tad damp and perfect for a hike.  I ran into some girls that were taking pictures at the top of the first peak.  I had them take one of me given the nice background and they asked how much further the falls were... I explained that they missed the turn.  It’s marked with a large stick in the ground on the trail with an arrow and “water” labeled under it.   They had to hike back .75 miles or less so no big deal.  You can actually see the falls when you get to the first rise after the parking lot.  Setup was as easy as Saturday except I had to guy off the antenna due to the wind.  I spotted myself and the contacts came easy.  Some other hikers arrived with dogs who started chasing each other around and almost took out the antenna.  Sulu was definitely up for the treats one of the owners was handing out.  She looked so funny as she went over to the lady, sat down, and then just stared at her.  I would have hung around a little longer and made some tea with the JetBoil but I wanted to hit the other peak before any weather came in.  I packed up and bugged out. (My route) 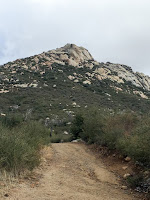 On my way to Stonewall Peak, I stopped at my favorite Mexican food restaurant, Veronica’s Kitchen in Descanso, and picked up the special of the day, a “super burrito”, made with beans, ground beef, lettuce, cheese and love.  It was awesome.  I saved a chunk of it for Sulu who also loved it (she pretty much eats anything though).

The drive to the State Park parking lot was easy but it cost me $10 to park.  Unfortunately, Sulu wasn’t allowed on the trail.  I’m sure she didn’t mind.  She had her four mile hike.  I gave her some water and she slept in the car as I headed out. 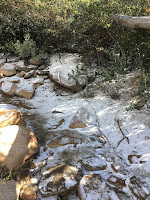 The hike up was easy.  It had a good trail with nothing really difficult.  Snow lined the trail starting about half way up and the winds had picked up since the first hike.  When I summited, I think the winds were about 40 mpg, gusting to 60.  I  called Jeanette so that I could do a quick test of the radio.  I wanted to see if I could contact the house from the top with my handheld.  It definitely worked but it was a bit scratchy.  The signal was probably getting to the house by bouncing off other mountains.  I’m pretty sure there were a couple of mountains in the way.  During this goofing around, I managed to drop my cell phone while on the platform perched on the cliff.  If it had slid 6 more inches, it would have gone over the cliff to a most certain  death.

The howling winds made it cold, very cold.  The temperature was no higher than 35 degrees and by my calcs, the wind chill made it about 17 F.  Setting up a HF antenna on the peak was  a nogo so I moved off the top and out of the way of hikers.  My spot had some shelter from the wind and I used some dead tree limbs to brace the antenna and strapped it down.   I had made two contacts already with my handheld, KM6LKP, and Adam, KJ6HOT.  Adam offered to spot me on SOTA watch web site so I worked quickly to get going.  I had to move the antenna once to find a better spot so it took me a while. 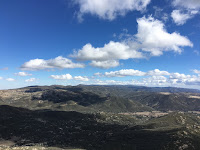 I had on my heavy gloves and cap and was still cold.  I put on my final layer and fired up the radio.   I contacted Adam on the 14.337 and I was off and running.  The location and terrain were not ideal for HF antennas but I did make a few contacts.  A really big wave of static interference moved in on my frequency and I couldn’t hear anything but horrid high pitched static.  I waited it out once at the beginning but this was not going to work and people were still trying to contact me.  I looked for a lower frequency that would work and found one.  I was about to post my new frequency on the web or ask Adam if he could when I realized my lips were going numb and there was a bit of snow falling.  I was cold and it was time to head down the mountain. 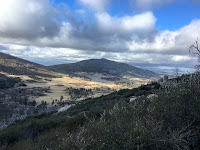 I was surprised that people were still coming up to the peak as I started to head out.  It was past 3PM and getting colder.  At about halfway down the mountain, I passed two teenage boys in short sleeved shirts!.  It was definitely cooling off and I wonder if they made it to the top without freezing.  When I got to the car, I pulled out the JetBoil and made some hot tea.  I thought about doing it on the mountain but I figured I would enjoy drinking it more as I sat in the car.  When I fired up the car, the thermometer said it was 32 degrees.  Sulu was fine.  She probably had a nice nap.  The cold ground didn’t seem to bug her.  I almost made a second mug but opted for seat heaters instead. (My route) 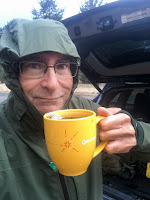 It was a good day.  The weather was cold and windy but still pretty.  I hiked 8.6 miles and got a double summit.