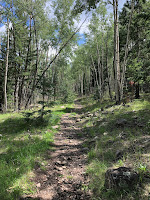 Today’s summit is a repeat of my Thanksgiving summit.  This should count since the new year ticked over.  I decided to do a video blog.... And then forgot the gopro.

Last time I only had 5 watts.  Today I brought the FT-891 that should be putting out 100 watts.  The band conditions were difficult and at the end, a thunderstorm to the south east of me made hearing anything very difficult.  On the plus side, the trek up to 11,800 feet was no problem and I’m surprised how quickly I recovered.

The trek up to the lookout and activation zone was easy.  The trail is in good condition and I think I had to step over one fallen tree.  I was actually surprised that I wasn't gasping, given that I was at 10,000+ feet.  I guess the cycling to work is doing me some good.

The rains start the first week in July so it's very green up here.  It's a heck of a lot more pleasant than the brown you get prior to the monsoons arriving.

I first setup the 20 meter packtenna dipole and tied it off with ropes to a tree and the fence (then moved off the fence to a tree to get it up higher.  I had difficulty hearing and the SWR was about 2 to 1.  It was at 15’ off the ground but it probably needed to go higher.  I got 16 contacts and then setup the CHA MPAS . It wasn’t any better so after logging a contact I decided to exfil from the area of operations.  There was a storm moving in and the thunderstorm to the south east of me was making it really hard to hear a complete call sign.

The trip back to the car was easy enough.  At one point I got some light hail but I didn’t get that wet.  Not enough to really warrant putting on the rain cover.

There is no recording today since I used the phone to capture call signs.