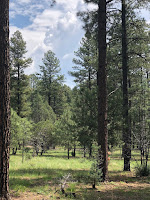 Today’s summit was to W7A/AP-025 - Gobbler Peak, my tenth summit for the week. My plan was to drive around (as far as I could) and tackle it from the west side (see chart here).  The road I planned to use was posted private and an alternate had a locked gate on it.  I replanned and used a forest service road from the south side.  It took me a while to do all of this, it didn’t help in the least, and when I finally got on the trail I was running out of time.  Thunderstorms kick up and start dumping around noon or 1PM so I needed to activate the summit before the lightning started kicking up.

I decided to attempt the east side, tougher than the west but I was hoping to be able to summit sooner as I could see the thunderstorm buildups to the south.  The peak wasn’t that far but it was going to be a heck of a climb no matter what side I attacked it from.  I was hoping a creative ziz-zag would allow me to get up.   But wait... there's more... (clicking on pictures makes them larger)

As you can see from my track, I never made it.  I thought I would hit a hill prior to Gobbler which was a mistake but a blessing.  I could have accomplished the same thing by following the draw that I descended on the way back but I learned first hand what the contour lines really mean :).

After getting to the top of the hill to get a look, I was really tapped out.  Looking at the peak from where I was took the wind out of my sails.  My plan was to angle up to the saddle to the south of the peak but the terrain was going to be too difficult and it was just as steep as the hill I just climbed.  In addition, there was no avoiding a very steep final push, and from the view I had the terrain looked difficult. From where I was, I was going to have to climb another 800 ft.

I toyed with the idea of taking what looked like an old road around to the west side but that would have burned up a lot more time, I would have to re-climb atleast another 200 feet, with no guarantee that I was qualified to attack from there either.   I was more tired today than normal and thunder noon was just around the corner.  (Lightning + my vertical antenna on the top of a mountain = bad idea).  Gobbler has only been activated twice, the last being in 2014.  I scrubbed the mission for today, headed home and made a sandwich and soup.  If I had more time and a minimal pack I might be able to tackle this beast but that will have to wait.

The rain started shortly after noon with a really big thunderstorm at 3.  I relaxed at the cabin, goofed around with my VHF geer and debugged my car VHF for the local repeater (I was using “tone sqelch” when I should have been using “encode” only).  As I write this, it’s 9PM and there is hail hitting the roof.  So far, we’ve had a half inch of rain, which is not bad for here.  I’ve been trying to average two peaks per day but I have to squeeze them in before the thunderstorms come and it’s a bit rushed unless you get up at the crack.  The designated SOTA summits are not that close together.