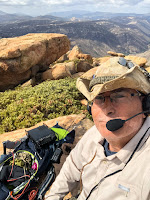 I’ve been itching to get out and do some hiking and Summits On The Air with my ham radio.  I texted my friend Adam, K6ARK to see if he had any plans for today, or if not, if he could suggest some peaks.  Thanks to Adam, today’s SOTA mission was to to W6/SC-092 - Morena Butte,  test my new boots, and get in shape for the San Diego and surrounding area hiking season (it’s too hot to hike in the summer here).  The secondary objective was to continue to test the AnyTone DMR radio in the field and see how it performs.  The weather, with medium height clouds,was perfect for some hiking and the clouds always add a nice texture to things.

I launched from the house at about 0700 local and headed out the I-8 East to Lake Morena and the trailhead for the Pacific Crest Trail, just off the Lake Morena Campground.  The drive to the IAF is a little over an hour from the house and pretty easy to get to.  The area of operation is heavily trafficked except for the fork that heads off up to the butte, about a mile.  The only people I saw the whole time were a family coming up the hill about a mile from the car on my way back, so it was quiet. 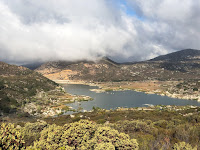 The first 3 miles up the PCT were pretty easy.  I had both radios with me and tuned the Anytone to the DMR Talk group for SoCal on the Otay repeater and listened to a little chatter.  I had the other radio tuned to the national calling frequency, 146.520.  I normally monitor that incase there is a hiker in trouble, they may try to use that.  There was a bit of up and down and crossing some slabs of granite but pretty easy going.

I reached the turn to the butte at about mile three miles in and there was a marker laying on the ground and a clearly marked trail.  This last mile up a trail to the butte was tad more difficult.  The trail was easy to follow until the top where it dumps  you onto slabs of granite and heads into some heavy chaparral.  Someone has done a nice job with cairns at that point out the best way up.  This was handy because most false trail lead into very heavy chaparral (ask me how I know).


Once on the peak, he antenna setup was sorta easy.  My operating position was nothing but massive boulders.  I found one with a crack and jammed the MPAS antenna down into it and then used a single line to add some tension against the wind. 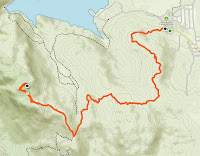 There was some sort of HAM contest going on today so it was difficult finding a freq to setup that wasn’t getting blown out by Mr. kilowatt.  When I first turned the radio on, I was sitting right on a frequency where a guy was calling CQ for the contest.  It was an easy first contact.  He was in Hollister, CA and so loud I had to turn the gain way down to hear what he was saying.

I eventually found a place to setup on 20 meter and got 15 contacts and another one on 40 meter.  A lot of hams were telling me there was someone just under me blowing out my signal.  My contacts ranged from California, to Broken Arrow, OK.  I think my max range was to Raleigh North Carolina.  I had a summit to summit to VE6/HC-255, in Alberta Canada, approximately 1,300 miles away.  I think he was using a 100 watt radio similar to mine but I’m going to email him and ask.  I talked to a friend, KJ6SJY, on the way home and he said he tried to contact me but there was someone right next to me blasting him out.  I must have had the frequency notched because I only heard someone once in a while.

After I packed up, I meditated for a few minutes and then headed down (I was hungry, and I wanted to get going over to Veronica’s kitchen for lunch).

One would think the trip back would be easier but in this case, it wasn’t.  I lost the trail a couple of times and on one of diversions I found myself on top of a massive rock looking at the trail below. I couldn’t easily get down to the trail and after another miscalculation, I was bushwhacking through some heinous chaparral.  I started to really try to pay attention to the cairns that were put out but for some reason, they are harder to follow on the descent in one particular area.

Once I was onto the PCT, I was reminded that I had to go uphill to get back.  The route goes over some hills along the way.  I don’t think I ate enough and my feet hurt and I’m probably a bit out of shape (even though I’ve been riding my bike to work).  It was a bit warmer and I drank a lot but was still pretty thirsty when I got to the car.  The total hike was 8.7 miles so it wasn’t short. 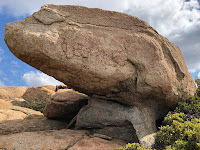 Veronica’s kitchen is in descanso, and one of my favorite places to fuel up after a tough hike.  I was also looking forward to a couple of large glasses of water to continue my hydration routine.  The carnitas burrito was just as I remembered and it was a relaxing lunch to finish off the day.

The boots worked fine.  They had a larger toe box and I think they were a bit more comfortable.  Although the AnyTone worked well today, I wasn’t able to find a contact on analog to test it with so that I could compare to the Yaesu.  I’ll see if I can satisfy my need to ensure it’s ready before the next SOTA outing, I’d like to switch to that radio since it give me DMR capability in addition to analog.    See my review of the AnyTone 868 HERE.

I’m beat but it felt good to get back out there (even if I hurt all over).

P.S.  I hope you caught the SpaceX launch if you live on the coast in San Diego.  The nighttime launch was fantastic!