I wanted to hike Middle Peak again and try going up the north side for the final summit push.  The last time I was up there, 11/25/2018, I went up the south side based on the best topo research I could do.  It’s been activated a few times so I knew it was doable.  During that last hike, I followed a false trail and ended up in a horrid bushwhack to the activation zone, followed by a horrid bushwhack back to the road.  After that trip, my SOTA Yoda, K6ARK, said I should have gone to the North side and used the unpublished trail.  So that was the mission of the day.  I charted out a new course on Alltrails in case I missed the trail...

The weather was beautiful up there today, starting with clear sky then moving to partly cloudy.  There was a slight breeze keeping it cool but not cold.  I could see the clouds moving up the mountain from the coast.  It was nice to be out in the sunshine not freezing my tail off.  I found the cairns that marked the trail to the summit (lat/long of 32.98287, -116.60007) and the tail to the summit was 10,000 times easier.  For one, that side of the mountain  wasn’t nearly as overgrown as the south side, and there was a cut trail that has been heavily used.  It’s beginning to get overgrown but not bad.  A huge shout out to Adam, K6ARK, who told me about the alternate route.

Once at the top, I contacted KC2GNV on DMR who always likes to do some DMR testing.  Last time, he also shot video and I embedded it into my video via a picture in picture.  It came out pretty well.  I cranked out a smaller video of just this test if you want to check it out here.  We ran through a couple of quick comparison tests of DMR vs. analog FM, and I also did some simplex DMR with three other hams in the area, so I had  four contacts, officially activating the summit via DMR. 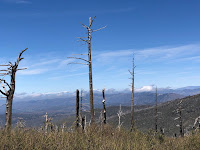 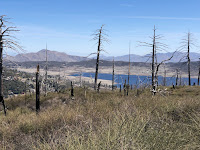 After the DMR test, I switched over to 20 meter band and spotted myself I had a pretty good pileup going.  As a bonus, I picked up three summit-to-summit contacts, all up in Oregon.

I was able to net only 3 contacts on 40 meter.  I went over to 17 meter to see if I could pick up any south america contacts and then back to 20 to hunt around a bit more.  My last contact was HÉLIO, located in Boa Vista-RORAIMA STATE, Brazil.  It was nice to end the day with an excellent DX contact.

After the hike I stopped at the junction near Descanso and had a huge turkey club.  Today was definitely a good day to hike in the Lagunas and the radio conditions were pretty good.