Today’s hike took me up to Sycuan Peak (W6/SC-203 - Sycuan Peak).  This is a short hike but steap at points.  I decided to sleep in this morning and headed out at about 10.  The weather was clear with visibility of a million miles.  It was just under 80 and a nice hike up.  The peak had a slight breeze and it was very enjoyable, I just wish I had brought my chair, I would have stayed up there longer. 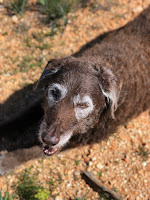 There was a SSB world-wide contest going on today so the 20 meter band was packed.  I decided to just chase stations that were calling CQ.  I started first with my friends in San Diego on DMR and then jumped on the HF.  I tried to chase a couple of other guys doing SOTA SSB with no success but most of them are using CW.  It’s very common for SOTA activators to use nothing but CW (morse code on a continuous wave) because you can carry less than half the weight.  You don’t need nearly as much power to send morse code because the receiving station just needs to make out the dits and dahs.... So I’m trying to learn morse.

Band propagation was pretty good.  I had 22 contacts all over the US as well as Hawaii, Aruba and Canada.  My furthest contact was in Slovenia, ~6,190 miles from my position.

It was fun collecting some decent DX contacts.  I stopped by my aunts house for a quick visit and then followed them over to my cousin’s place.

Thanks to Brian, KC2GNV for his help in testing DMR today.