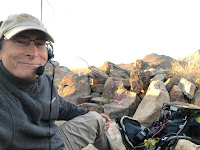 This is a recap of my adventures at Socal Spring SOTAFest 2019.  My friend Adam, K6ARK, organized a trip for ham radio operators that enjoy doing “summits on the air”, (SOTA).  We planned to meet at a campground, hike up to bunch of nearby summits to “activate” them, getting contacts in the US and beyond, and then do the next peak.  There will also be a lot of stories about past epic conquests, radio and antenna gear, and techniques.  Hams also build a lot of different pieces of their own gear, from custom radios to antennas, and other gizmos.

The original destination was near Big Bear, CA but the weather called for a chance of rain so we went out to the southern desert region to Sawtooth Campground, which is surrounded by SOTA summits.  Although Adam announce the meetup on a few different mailing lists, we only had two other hams that were going to be able to join us, Scott (N0OI), and his wife, Corrine (N2ZIP).  I’ll take some of the burden and help with the marketing campaign next time.      (Click on photos for larger)
Friday, 4/5/2019

Adam picked me up at about 1430 (local) on Friday and we headed out.  Our plan was to stop at a summit, Catholic Hill (W6/SD-186 - Catholic Hill) on the way up and get a few summit points before sundown.  The hill is within the town of Victorville and I think we got to the base of the hill a little after 5.   There was a road leading up to the base of a large water tank and then we would bushwhack to the top.  Bushwhacking in this part of the country is pretty easy.  There is very little vegetation due to the lack of rain and high temperatures but the terran can be very rugged.  It can be a bit difficult since most of these mountains are giant rock piles.

The hike is rather short, about .8 miles out and back, and it has a 505 foot elevation gain.  (Here’s a map) The area is very rocky.  There was a paved road going up so I thought I would continue wearing my walking shoes, not thinking about the route from the road to the top.  The paved road that went up about .2 miles was VERY steep.  It ended at a very large water storage tank.  The rest of the hike was pretty easy except my having to navigate the rocks in shoes that weren’t designed for that task. 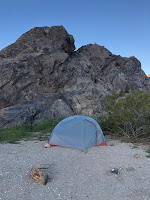 I setup at the peak and Adam setup about 100 m from me.  I thought this would an easy four contact summit and we were both hoping work some DX contacts to Japan or possibly farther.  Unfortunately there was an incredible amount of radio frequency interference (RFI).  The meter on the radio was reading about S7 out of 9 when it should have been S1 or less.  That meant that in order to hear any other operators, they’d have to have a very good signal.  It took a while but I was able to log 7 contacts and Adam did about the same.  One of my contacts was N0OI, who was going to join us tomorrow.

There was a small breeze making it cool and it was getting dark.  Neither of us wanted to desummit at night, so we didn’t hang around long.

We stopped at an Itallian restaurant in Victorville called Mama Carpinos.  It was packed and all of the customers mentioned that it was the best Itallian in the area.  It definitely lived up to the reviews from the locals.  We pulled into the campground at about 11PM and were very lucky to get a spot.  It’s a very popular spot for rock climbers.  Sleep for me didn’t come easy. 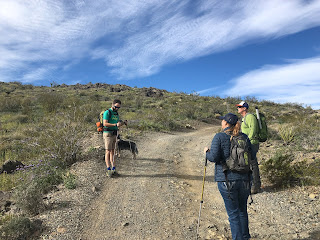 Saturday, 4/6/2019
We got up and started making coffee at about 6AM and Scott and Corrine arrived shortly after that.  And after some quick planning we headed out to our first summit, Ord Mountain (W6/SD-010 - Ord Mountain).

There is a dirt road that goes all the way up to the top (see our route here).  If we had a good 4wd we could have approached a little closer but there was a locked gate about a half mile up.  The hike was technically easy with just a few spots that had a significant incline.  Corrine decided to hang back at the truck for the hike and exercise her dog Zip.

Adam and I were the first to get into the “activation zone” and we called Scott on our HTs, giving us our first “contact”.  My next contact was Corrine, N2ZIP. The summit is littered with radio equipment so the RF noise was pretty high but not as bad as the night before.  I was able to knock out 13 contacts after setting up.  Scott and Adam were experimenting with a few different radios.  They were doing CW (morse) for this trip and were able to bag enough contacts to activate the summit.

The walk back to the car always seems long to me because we’ve seen the terrain and it’s “old hat”.  The total hike was 7.1 miles with 2,201 feet of elevation gain. 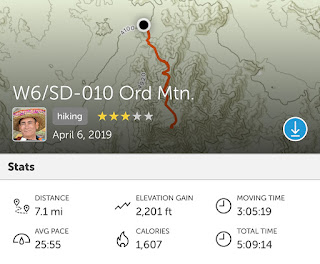 Once loaded up, we headed over to Goat Mountain (W6/SD-443 - Goat Mountain) for our second summit of the day.  From the car, this is a 1 mile hike with 787 feet of elevation gain making it a bit more difficult incline wise.  We followed an old jeep tail up to a spot that was being setup for radio towers and then from there up to the summit (see our route here).  The route was pretty given that everything was green.  After the boulder field close to the top, the last 50 feet was up a scramble over a set of boulders (I call it scrambouldering). 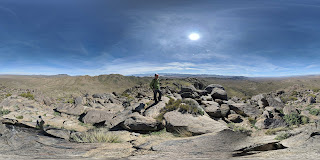 Above photo courtesy of Adam Kimmerly

There wasn’t a whole lot of room in the activation zone to setup so we were pretty close.  This allowed only one person to operate at a time.  The noise floor here was the lowest so far.

After Scott got his contacts on CW, I jumped on and got my contacts with Adam going last and completing his CW activation.  One of my contacts was Doug McAlexander, N4HNH.  Doug was just shutting down when he saw my spot pop up on his computer indicating that I was looking for contacts.  He fired up his rig and we made contact.  Doug was pretty excited to get my contact because with my summit of 3 point, he crossed over to 1,001 points, making him an official “Shack Sloth”.  I was glad to help him out.  I need “chasers” to help me activate and get activator points and chasers need “activators” like me to help them get chasing points.  It’s a yin/yang thing.  We traded emails after I got back and he also mentioned that band conditions seemed difficult. 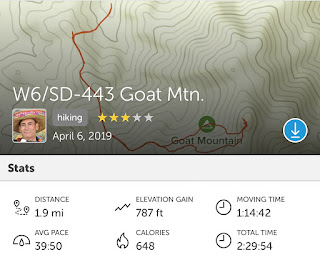 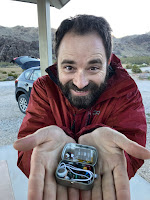 We took a little bit easier route back to the cars after scrambouldering off the top and headed back to camp.  The plan was to setup a few antennas and have a bake off to see who had the best antenna.  Also, Adam was planning a night summit to try to get some DX summit-to-summit  but neither one of these events happened.  I think the group was happy kicking back and chatting, eating and drinking.  I’d really like to do this next time with my WSPRlite, so I’ll help out and organize it.

We broke out some snacks, wine and beer and then we fired up our stoves and cooked dinner.  This was an “each man for himself” kind of thing.  I had a Mountain House Beef stew.  It wasn’t bad.  That evening we built a fire and roasted marshmallows. 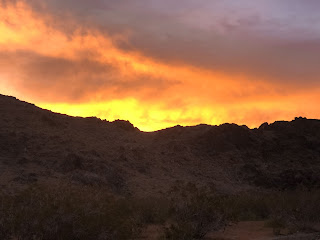 Sunday, 4/7/2019
We popped up out of the rack at about 6 and everyone started up their stoves to get coffee going.  After packing up, we said goodbye to Scott and Corrine.  They decided to head back to Parris, CA while Adam and I got ready to head out for one more summit, Watkins Benchmark (W6/SD-218 - Watkins Benchmark).  I decided to have some breakfast hash to fuel me up for the final peak and after loading up, we all hit the road.

All the roads to the various summit trails or roads that we hiked were very doable in Adam’s Miata.  They were rough but the 6 or so inches of clearance was enough and the road out this morning was no different.  I wasn’t sure the route we took was the best but after looking at the chart I now think it was (here is our track).  If you open the track, you can see that we went up the south side and then followed a small ridge to the main summit.  There was a little bit of up and down but not bad.

Once on top we took our time and setup.  The activation zone was pretty big, giving Adam and I plenty of separation so that we could work 20 and 40 at the same time with little interference. 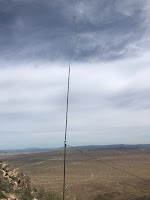 I had a small problem with my antenna this time out.  The final two sections of the top portion of the vertical couldn’t be connected because the connector fitting got jammed down into the pole.  I tried to pull it out but that only resulted in me somehow pushing it deeper inside.  Adam gave it a try with the same result.  I borrowed some wire from Adam, thinking I could  try an inverted V end-fed but I couldn’t bond the hot wire to the matching unit.  Plan C was to try it as-is.  After firing up the radio I found that the SWR was low enough to still be usable.  I had plenty of contacts on 20 meter and one on 40.  (I only had one possibly because I had turned the power down to test the antenna).  I’m sure I wasn’t hearing all the stations out there but I was able to get Gary (W0MNA) and Martha (W0ERI) on their mobile as they drove home in Kansas. 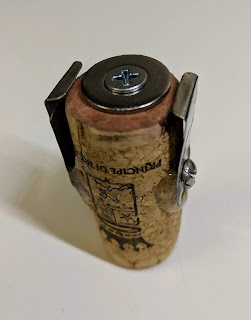 A custom iambic keyer by K6ARK 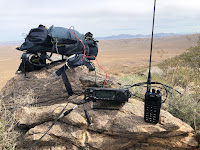 On this final summit, we decided to take our time and not be rushed.  After getting my contacts, I decided to plug in the keyer that Adam custom built into my radio and configure the radio for CW and try it out.  As you may know, I’m working on learning morse so that I can lighten my load with a smaller radio and get a lot more summit-to-summits.  A lot SOTA operators only activate with CW.  As you can see from the picture of my new iambic keyer “paddle”, Adam knows me well.  It actually worked really well.  I was able to send my CQ and callsign at about 20 words per minute (mainly because I had practiced enough to commit it to muscle memory).

Our trip back to the car was uneventful, thus completing an epic SoCal SOTAFest event.  The weather was perfect for the trip with light winds and cool temps.  Over 3 days we hiked up to 4 summits, hiked 12.5 miles, and logged an elevation gain of 4,100 feet.  To me the mileage and elevation gain is pretty small for 4 summits.  Don’t get me wrong, I’m good with that.  :)

A super special thanks to Adam (K6ARK) for organizing, being a SOTA tour guide, and the SOTA Yoda.  I love the cork keyer.

<< NOTE:  Video is still in post production but the crew went on strike... coming soon>> 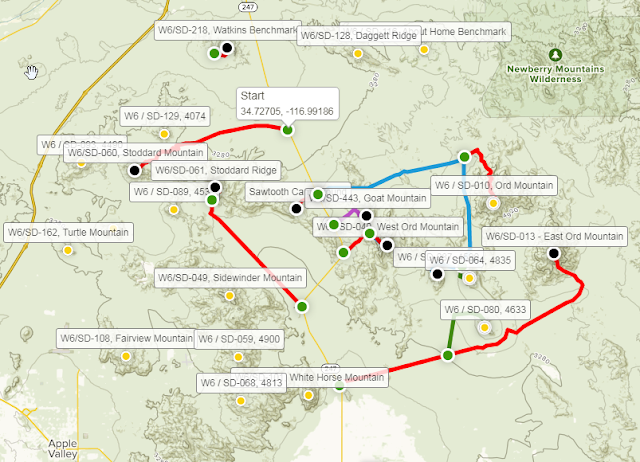