SWR Test my new Signal Stick for my HT 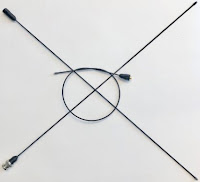 I recently ordered a new antenna for my handy talkie (HT) that I carry on SOTA expeditions.  The reviews of the super elastic Signal Stick claimed better performance by multiple people.  It was $12 bucks so I got one for me and one for a friend at work.

Before I take it out and do an A/B test on a mountain top, I thought I’d put it on the antenna analyzer to see how it performs SWR wise compared to my trusty and reliable Diamond RH77.  As it turns out, the performance SWR wise isn’t all that great.  Below are the SWR readings with just the antenna, and antenna with counterpoise for both.  NOTE:  I might be able to tune the counterpoise for the signal stick and I tried bending it back on itself but couldn’t improve the SWR by much more than a point.

When I’m on a summit, I normally use my HT on 146.520 MHz, the national calling frequency, or on 446 running DMR tests to KC2GNV so those are the two main frequencies that I tested.  I normally don’t attach the counterpoise that I have but it would probably improve things when I need to max my range.  I keep it in my pack just in case.

All tests were with me outside holding the radio up in the air as high as possible to get the best performance.

As you can see below, the signal stick sucks SWR wise.  This means that using it, you’re not going to get as much power out of the station as you would with lower.  Below are the readings.
NOTE:  I tried the other Signal Stick antenna as well to ensure that I was getting a consistent result and I was.