There are a set of three peaks in close proximity, Wolf Mountain, Lake Mountain, and Wishbone Mountain.  I was hoping to do all three today but the weather wasn’t having it... If I had left a couple hours earlier I could have probably done it.  My planned trail head was about an 1.5 hours from the villa.  I decided to do sort of a loop through the area going from Vernon, AZ, down to Mc. Nary.  The summits would be between the two towns. (click on pictures for larger)
[click on image for larger]

I had charted a planned route off of a trail up to Wolf Mountain but decided to deviate from that to possibly save time.  I probably didn’t.  I found a quasi gulch filled with boulders and scrambled up that.  I wasn’t expecting how far I would have to go.  The top was heavily forested and the antenna setup was easy.  Sotawatch.org showed that there was only one other station up on a summit and I tried a chase on CW but no joy.

I had OK cell service and was able to spot myself and quickly logged 15 contacts on 20 meter.  I looked for some other stations to chase and after finding none decided to get off the mountain.  Thunderstorms were working their way up from the south and I wanted to hit one other peak at a minimum, and possibly 2 more before lightning risk shut me down.

I followed the charted route back to the car, (look for Wolf Mountain HERE) and it was a hell of a lot easier than the way over (as you can see on this track).  The nice thing about taking a different route back is it’s new and still provides a sense of adventure. 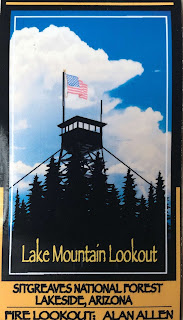 Once back at the car I headed over to Lake Mountain. I spotted a sign for the lookout and followed that road.  Turns out, this summit is a drive-up.  Alen Allen, the lookout, invited me up to take a look from the top of the tower.  He was a nice gentleman from Tucson.  He said this is his summer getaway with no mortgage payments.  There’s a little cabin at the base where he and his wife live.  The forest here is beautiful, with a great view in all directions.  He showed me a picture of the original lookout that was built into the top of a huge tree.  (I’ll try to find a picture of it on the internet).

I setup not too far from the tower and quickly pulled in 11 contacts.  The GoPro needed a battery change and I wanted to get my contacts before the lightning came too much closer so I skipped the video.  My first contact was W0MNA, Gary from Kansas.  He was the first contact on Wolf Mountain as well.  Martha, Gary’s wife, was contact #4, making this summit fully activated.  Gary must have me or the area set on hamalert.com because he’s always up front on my list of contacts.

I was contemplating heading over the Wishbone Mountain but thought better of it.  It would take me an hour to summit that guy once I was at the trail head and I didn’t want to chance having lightning over me.  I’ve leaned that you don’t need to have lightning coming down close before you pack up.  Your position can be the first strike and it probably won’t end well.  Net net, I headed back to the SOC (SOTA Operation Center, AKA my cabin).

It was a pretty drive back with a stop in Springerville for lunch.  My original plan was to go into Mc Nary and have an Indian Taco at a road side stand but they were closed.  My alternate was a Sonic.  Interesting thing, they had a burger with “Hatch green chili”.  The green chili is very famous in this area and I’m guessing this isn’t a standard burger everywhere.  I ordered one and it was quite good.

On the way back to the SOC I could see lightning and rain in the area and on arrival we were in a bang’n thunderstorm... but without the rain.  The rain came later but it was super light, nothing like I had see to the west of the villa.

Summary: Nice hike in the forest, logged some miles, activated two summits, and logged 20 more SOTA points.  Now it’s a glass of wine and watch the rain come down from my porch.