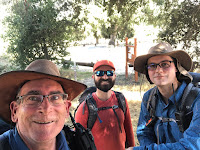 On Sunday, 22-Sep, I headed out to Morena Butte with some fellow hams to do some Summits On The Air (SOTA).  Adam (K6ARK), and Jake (W6RWS) met at my house and we were wheels up by 0600.  Morena Butte is east of my house near the Laguna Mountains, with a summit at 4,000 feet.  Because of the early start, it was a nice semi-cool hike up to the peak.  As we turned and headed up the final ascent we also caught a slight breeze, but it was starting to warm.  There were some pretty vistas on the way up and the crew was in high spirits.
(click on pics for larger) 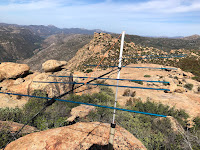 Adam brought a 2 meter 6 element Yagi that he had just finished building (a directional antenna).  He wanted to give it a test run in preparation for next week’s SOTA where he was going to try to contact other hams on mountain tops in Arizona, ~200+ miles away using a 50 watt VHF radio.  Adam reached some guys in the San Gabriels no problem and even tried a little CW (morse code) on 2 meter.  He had a blast and the antenna worked perfectly.  One part of this ham hobby is the endless number of antennas that you can build (along with radios and other gear).  I have plans to build a custom antenna, a rigid 20 m dipole, and I think I found the materials that will make it work. 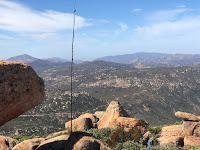 I had the usual loadout, and I quickly setup and bagged the necessary contacts.  Jake was using a 5 watt software defined radio and was trying out a custom end-fed antenna built by Adam.  It’s super light weight with the matching unit built into the connector.  Adam’s gear is always precision built and light weight since he is an ultra light weight junkie.  Jake is fairly new at SOTA but activated the peak with no problems.  I heard one of his contacts, W0MNA, Gary from Oaklahoma, who I had just talked to during my activation.

The trek back to the car was interesting.  We were talking and having so much fun during the hike in that I didn’t realize the amount of down-hill hiking we were doing.  This is something that I normally pay attention to.  The reason is... you have to go up those hills to get back.  We left the peak at about 11 and it was going to be a hot one.  Needless to say, it was a suffer fest on the way back.  With 90 degree temps and the up-hill, I was suffering.  I did this same hike almost a year ago but had forgotten what it was like.  Once back at the car, Adam had cold drinks for everyone on ice.  This guy knows how to travel. 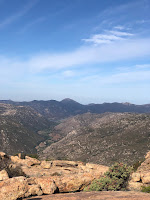 Once I got home, I took a shower and then a nap... and slept like a rock.