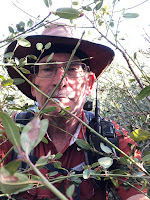 I headed up to Middle Peak to have some amateur radio fun.  I’ve been up there twice before.  The first time, I headed up from the south side, a huge mistake.  My first mistake was not calling K6ARK who had been up there before, and the second was following a false trail.  It turned into a massive sufferfest as I bushwhacked up to the summit.  I got into the activation zone but stopped short of the summit since I still had some skin left.  I setup, got my contacts and then got back down to the road.  That trip was by far the most difficult bushwhack I’ve ever done.

My second trip was using the trail mentioned by K6ARK from the north side.  That was a lot easier.  It was mostly trail and definitely doable. 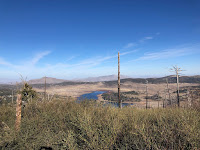 Today’s route I used the northside of course.  There was some snow on the ground so technically I can say I walked through the snow to get to the summit but in reality, it was a small patch.  I did get a small surprise though.  The brush had completely overgrown the trail that leaves the road.  That last .1 miles was a miserable bushwhack even though there was a trail. It was a beautiful day to be in short sleeves, which turned out to be the wrong clothing.  My arms are pretty scratched up but I survived.  It definitely wasn’t as difficult as the south side, so that’s a bonus.

Once on the summit, I setup my antenna and rig and got to work.  There was a CW contest going on and Dan, KI6KU recommended using 17 meter band as it wasn’t as busy.  Thanks buddy.  He was actually my first call of the day.  Thanks again Dan.  The next contact was John, ZL1BYZ, in New Zealand.  This is my third CW contact with him so I’m starting to recognize his call.  That was very cool. 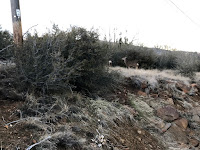 I was able to chase Scott, N0OI who was on a summit 50 miles north of me.  That was awesome.  I jumped down to 30 meters and worked some more stations, and then put my line out on 20 meters for only one station.  I used my HT to work some of my friends in San Diego using my digital (DMR) radio and then headed off the summit.

It was a difficult push back down through the brush and got lucky I didn’t wreck myself when I slipped off a wet log.  I’m probably not going to do this summit unless someone goes up there with a brush saw.

As a reward, I was treated to some deer crossing the road not far from me.  There were more in a field mixed in with some wild turkey.