This Saturday my objective was to find another hike that didn’t have many people on it.  San Marcos seemed like a good bet, and it was.  There were very few people in the area and we gave each other plenty of room (for the 4 people that I did see).

I wanted to try SSB phone today since I haven’t worked any stations that way with the KX2 in a while.  It was tough finding a quiet frequency to setup because there was a small contest going on and a lot of hams on the air.  Just about the time I thought I found a spot, someone would camp on top of me.  I did eventually find a spot and spotted myself on sotawatch.org. 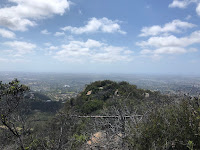 Gary, W0MNA, was my first SSB contact.  He’s always locked and loaded.  I got another contact but that was it.  I decided to switch to CW and butcher some code for a while.  I had a tough time there as well.

I was just starting to work ZL1BYZ when someone tuned up on frequency, drowning him out.  Very frustrating.  I got most of his call and was pretty sure it was him but had to send him a few ? marks to make sure.  A little while later, someone just started calling CQ on top of me.  I tried to hail them but they weren’t going to move.  I didn’t bother long with that and just moved.  I did get Martha, Gary’s wife on CW, so Gary on SSB, and Marth on CW.

It was a weird day on the mountain.  My CW devolved a bit, but then started to get better as I worked more stations.  I still had a headache from the personal party I threw myself from last night so that probably had a lot to do with it.  In fact, it probably had a lot to do with the frustration.  But in addition, SOTA Goat, my summit app wouldn’t let me spot so I goofed around with the web app and spotted myself a couple of times.  Today did bring a first however.  I had someone call me from Cabo San Lucas on CW, a first.  He came in really strong.

I’d done this hike before but today, I took a different route down off the mountain.  It was very pleasurable and it dropped me off within 60 feet of the other trail going up.  See my route HERE.

The day was a success, with 27 contacts in the log even though it was frustrating.