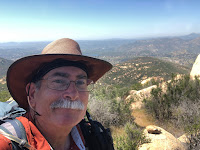 When the end of the week hits, I’m dying to get out, hit the trail, and play radio.  I knew today was going to be hot but figured what the heck, I’ll just take it easy.  It was supposed to be 89 at my house.  I’m stupid, hiking over by Crest in the heat was not a good idea but I took my time on the way up and back.  The mountain may not actually have a name, the SOTA designator is W6/SC-260 Hill 2258, but I’ll call it Flynn Mtn.

I got up early enough but I made it a lazy Saturday, having a coffee and reading the online paper.  I had the whole day off so I figured, if it took me longer than normal, so be it.   The drive over to the trail head which starts in a residential area, similar to the hike last week, was about 30 minutes. The trailhead is clearly marked and starts down a path between two pieces of property.  It was a nice trail and part road.  All was going well until about 1.5 miles in.

I managed to lose the trail at exactly the wrong time (is there ever a right time?).  As you can see from the chart to the right (click for larger), I figured that since I wasn’t on a trail (actually there are small paths all over the place up there), I would choose one that went around the interim mountain instead of the path that I charted over the top.  After awhile of difficult bushwhacking in the chaparral, with my legs sliced up, I stopped to take a break and consider some poor life choices and thought about turning around.  The path ahead was not going to work but I noticed a well worn trail on the ridge between two small mountains and I figured that would probably be the trail I should be on.  It’s actually the way I would have gone because the direction I was headed was not going to work.  I headed for that and found the trail I was supposed to be on.  The rest of the hike was simple once I hit the trail, but HOT.  I took another break to have something to eat under a massive boulder after checking for snakes.  I’d been keeping an eye out for snakes on the way up since there were a lot of small holes along the route. 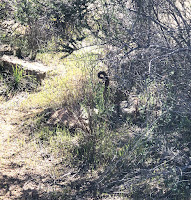 Very close to the top of the mountain I heard a VERY LOUD rattlesnake (think SSB with no noise cancelling).  I looked up the path and there was a nice sized rattlesnake in full coiled cobra position ready to take a chunk out of me.  His body was coiled and his head was about a foot off the ground.  He seemed a little pissed off. I noticed him in plenty of time and uttered an expletive as I backed off.  The picture to the right shows him as he was turning to head somewhere else.  I decided to take a bit of a detour there and planned to do the same on the way back.  (click on pic for larger)

Just after the snake, I heard N6AN doing SOTA on Flint peak by Pasadina, CA.  I walked a little farther up the trail and listened to him work a few stations.  I was well within the activation zone when I called him and got my first contact and a summit-to-summit with the HT. 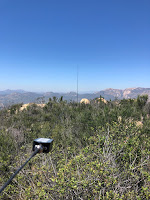 I got out the LNR end-fed antenna today as it’s a bit longer and has a feed line on it allowing me to get it up a tad higher and more easily choose where I wanted to sit, which was in the shade under some bush.  The setup was a pain though.  I initially set it up too far out, the wire popped out of the top of the mast and it took me a while to find it as I was bushwacking looking for a very thin black wire.  I moved the mast closer, setup a second time.  I was almost setup when one of the mast lines gave way.  Another trip fixed that issue and I took a break. I did learn a trick for better securing my little ties in the future however.

I got the HT out and mounted the MFJ-1714 whip on my HT to easily knockout 5 more contacts.  I was happy to talk to K6MXA on the radio  and confirm that the trail over the other peaks is indeed the right way to head back.  I got some good signal reports using this antenna and easily worked K6LDQ in Torrence, CA who gave me a 54.

Today I decided to start on SSB and work 20 m, harkening back to the days when I could hear people’s voices.  The ones I most recognized were Gary and Marth (W0MNA, W0ERI).  It’s always nice to hear them on a summit and it’s somehow reassuring.  I’ve never met them but they are always there, ready for a chase, and feel like close friends.  Sure, they contact me on CW but this is a little more personal. 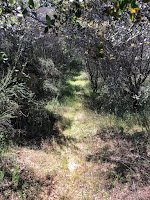 After bagging a few stations via SSB, I switched over CW after and called CQ as well as chased some other summits, bagging 17 more contacts.  I was happy with my morse code skills for once.  I didn’t have to ask for a repeat as many times (partly because the pileups weren’t as bad) and my sending seemed pretty solid.  Ever since I cleaned the corrosion off the my paddle keyer axel, it’s been working like a charm.  Just as I was putting my radio back in the pack, I saw an alert on my watch from Jamie, N6JFD, who was on another summit (I use hamalert.org to alert on people I know).  I’ve connected with Jamie a few times and he’s part of a slack.com SOTA group I frequent.  I hadn’t taken the antenna down yet so I quickly got out the radio and jumped in when there was an opening, trying to break through the pileup he was working.  I could hear him just fine but he never came back to my “S2S”.  I was getting a little frustrated till I realized I had forgotten to turn on the “break-in” feature which causes the transmitter to fire up when I start keying.  I turn it off when I start packing up so I don’t accidentally transmit as things are getting moved around.  After turning it on, my next attempt was met with success.

I’m really glad I brought a chair today.  Weighing in at 1.2 lbs it made the setup  comfortable and overall enjoyable experience.

I packed up and headed down the mountain.  It was about 3pm so nice and warm on the way down.  Like an idiot, I forgot to put sunscreen on so I Lathered up, packed, and bugged out.  It was hot, with zero wind below the summit, way too hot.  I took my time but then that just made the sufferfest last longer.  I was on high alert for snakes along the trail on the way back for sure.  I managed to stay on the trail on the way down which was great.  As I crawled along, I was trying to figure out how I got off the trail on the way up but never quite figured that out.  No more snakes and the car with air conditioning was a welcome site.

One of my first acts after this was to update the AllTrails map for this and dial it in perfectly for the next time.  Next weekend it should be a lot cooler but I’ll definitely be up at 5AM and avoid the worst of the day on the way up.

If you are interested in SOTA, I’ve create a series called “SOTA 360”.  The first video is an explanations of what it is, why anyone would activate or chase.  The series continues on with videos on the planning for activation, an actual reference activation, and a wrapup on activating by uploading my contacts.  I’ve also published a video on chasing and will have a more in-depth video on using AllTrails.com for SOTA planning.