After a long week in the chair I really wanted to get out and do some hiking.  I had been up to the San Gabriels near LA with Adam, K6ARK in April 2018.  We hiked Mt. Islip, Mt. Williamson, and did a quick drive-up to Table Mtn.  I really wanted to go somewhere where the country was more alpine like and this area is good for that, similar to last weekend up at Tahquitz.  If I’m going to drive all this way, I might as well make it worth it and try to do a triple.  In addition, all of these are 8 pointers, helping me get a little closer to breaking the 1,000 point mark.
(click images for larger)

I was wheels-up at about 5:45 to start the trip.  I originally thought it would take 2.5 hours but it only took two.  Part of that was most likely due to light traffic for an early Saturday morning. 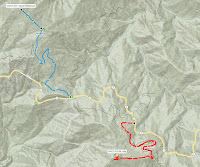 The trailheads for Islip and Williamson are on the Angeles Crest highway and are only 1.5 miles apart.  Since I was coming from the south, I did Islip (W6/CT-010) first.  I later found out that there is a shorter trail but I really didn’t mind a longer hike on this one.  It’s only  2.5 miles up and I followed the same path that we did with Adam back in April of 2018.

I started on the trail at about 8AM local time so the temps were very nice.  It looks like they added a few campgrounds along the way or I just didn’t notice them before.  I did short-cut the Pacific Crest Trail (PCT) which is the steepest part.  The rest of the trail to the summit was a gentle rise.  The trail at the road is at about 7,000 feet and the reported elevation of the top is 8,251.  The alltrails app recorded an elevation gain of about 1,296 (it counts elevation gain on the return if there is any).  (actual chart HERE) 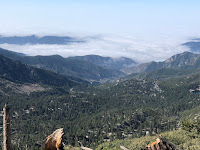 I figured there would be a lot of people out on the trail today and I was right but not as many as I thought.  I probably saw 3 other groups of hikers going up, and probably about 5 on the way down.  Not everyone wants to get up at the crack.

Once on-top there were about three groups up there enjoying the view and one drone pilot having a good time.  Setup was pretty simple and once I got things setup, the drone pilot was very interested to see how it worked.  I started out on SSB so that he could experience the voice side of the contacts.  I picked up about 6 sideband contacts and then went over to CW and worked another 22 stations.  I tried to reach Adam with my handy-talkie/hand held 2m radio (HT) who was on a summit way north of me.  It was a chance but why not.  I didn’t catch Adam but I did contact 5 stations in the LA area and one booming in from San Diego and a couple that were on summits themselves. 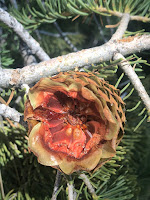 The trip back to the car was simple enough and enjoyable.  I had a PB&J sandwich at the car and drove over to the Mt. Williamson trailhead.  I felt like I was in good shape and was ready to roll.  It was a little warmer and my legs started complaining right away, something I didn’t expect.  I guess sitting in the chair all week just destroys you.  This hike was going to be about .25 longer on the way up but has a lot more climb to it, about 500’ more.  It had warmed up to about 80 at the trailhead.  I took it easy but found that I was stopping in the shade a lot more.  One of the things I stopped to look at for a while was a tree that had grown around and into the cracks of the rock, almost consuming it.  Check out the picture.

Once I reached the first summit, I was bonking (a term I learned from bicycling where you just run out of energy, possibly from not eating enough).  The only thing I had to eat for the day was the sandwich.  I probably should have had at-least an energy bar before Islip and brought some fruit.  The hike from the first summit over to the actual highest point was a bit of a sufferfest.  Determination to get to the activation zone overrode the quit impulse.  It’s actually a pain in the ass to get over there from the first summit making this summit not as enjoyable.  (actual chart HERE). It looks easy on the chart but the trail doesn’t follow the top of the ridge, it drops down a tad on the north side due to the craggy terrain. 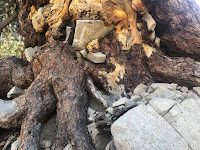 Once on-top, I setup and relaxed and operated the radio for a bit.  I picked up a few contacts on the HT and then asked one of the operators if he would mind spotting me on 20m CW.   K6LDQ was more than happy to help out.  Once I was spotted, I had a major pileup of operators wanting to work me for chaser points.  I worked 26 stations in the US, Canida and my favorite, ZL1BYZ, in New Zealand.   A nice lady stopped by with her dog and was wondering what I was doing.  I unplugged my ear buds so she could listen in as I used morse code (CW).  She was totally amazed and hung around for a while as I worked about 10 stations.  She was impressed that I could decode the dits and dahs (I’m kind amazed as well).   Most people are amazed how far I can reach out with my little 10w radio.  I could have worked 40 meter and more but I needed to get a move on if I wanted to get the last summit in.  I figured I covered most of the chasers on 20 anyway.  After I shut down, I enjoyed an energy bar and relaxed in the shade on my chair before bugging out.

Total miles on Williamson was 5.39 mi, with 1,742 ft of elevation gain.  I gotta say I enjoyed Islip a lot more.  The forest is nicer as well as the terrain.  I was pretty tapped by the time I got back to the car but I had one more stop to make before heading back home.

Table Mountain is right as the Angels Crest Highway intersects with Big Pine Hwy.  This is a pretty simple one to do since all you need to do is drive up into the parking lot and walk about .5 mi to the top of the mtn. Which only has about 130 foot of elevation gain. 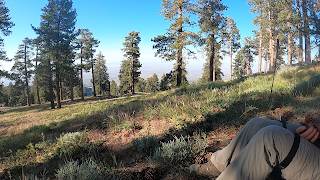 I strapped my push-up pole to an old post and setup in the shade.  It was about 6pm by this point and was cooling off.  Table mountain sits right on the edge of a rim that looks down into Palm desert, 7,000 feet down.  I took my time and worked contacts via CW on 20 and 40 meter bands.  There weren’t a ton but it was enjoyable.  John, ZL1BYZ, in New Zealand called me for the second time today.  It was a leisurely pace of chasers, only about 14.  At this point I was in no hurry.

I loaded up and headed home and started thinking about food right away, wondering if I could make it all the way home without stopping.  When I saw the sign for In-and-out burgers, I slammed on the breaks and exited the freeway in Temecula.  The line was long, very long but worth it.Ohhhh, did that taste good.  (geeze, just writing this is making me drool).  What funny is that it sits right between an Arbies and a Wendy’s burger place and both had near empty parking lots.

This was a very worthwhile trip.  It was a long day but I felt like I accomplished something.  I enjoyed the hikes and got some fresh air, good contacts while working the radios, and a lot of exercise.  I look forward to doing Islip again in the future.