Today’s planned summit is Palomar Mountain, located a little over two hours from my house in San Diego.  I’m going up there with Jake, W6RWS, and Adam, K6ARK.  You can hike to the summit but with the hot temps here, I’m not doing that.  Today’s plan is a little bit different though.  Instead of an early morning march, we are driving up in the late afternoon, with a planned summit time of about 17:30 local.  Jake works for a local company that builds cameras for spacecraft.  The cameras go on rovers, orbiting satellites, and eventually a manned spacecraft to the  moon and beyond.  The cameras are used for navigation and exploration.  Jake wanted to activate later in the day and then stay to get some dark skies in order to test a camera that he’s working on.

We went up to the high point via the north entrance to Palomar Divide Road (charted here).  It’s off highway 79 just north of Warner Springs Glider Port.  The road is 13 miles of mixed dirt road and dirt road covered in a layer of asphalt.  I say that because it looks like they literally just poured asphalt right onto a rocky road.  It’s very odd.  My highlander had no problem but I would suggest it if you have less than seven or eight inches of ground clearance you might want to find a friend that has a vehicle that does. You don’t need all wheel drive when it’s dry.  Adam tried to come up the south side from the observatory and the road was closed so he had to come around to the north side (I don’t think he was too happy about that).  Unfortunately, I didn’t tell him our route, I just assumed there was only one way up that side.  For me, it was plane dumb luck, I just took a rout given to me by WD6TED, who had done this back in May. 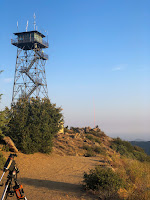 There’s a manned lookout tower up on the high point and the famous Hale observatory just to the south of it on another peak. After unloading our gear the gentleman in the lookout tower let us know that they would close the very last part of the road to the tower at 1830 (local) and that they normally do that at 1730.  They evidently don’t man it at night.  This wasn’t going to be a problem since it’s only about .1 miles away.  We took our cars and parked outside of that gate and headed back up.  I left the 100w radio in the car but I wished I had brought it up with me.

Setup took me about 5 minutes using the K6ARK random wire antenna and my KX2.  I started out on 20 meter (14 Mhz). I spotted myself using Outd, my logging program, and my first contact was John, ZL1BYZ, in New Zealand.  I had a solid copy on him except when the band undulated.  It was cool that my first contact was a DX, and a good one at that.  I tried to get Amy, AG7GP, who was also on a summit in Oregon.  My first attempt on 20m failed but when she switched to 40m, she had a very strong signal and we completed the CW contact no problem. 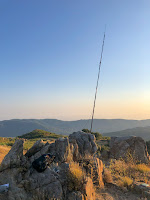 While I was working 20m, Adam was over by the lookout tower working 40m, and Jake was working contacts on 2m with a rollup jpole.  Adam was running 100w into a linked dipole and from the sound of it,  side-band was really hopping and running long. Jake got off to a very slow start but eventually things picked up on 2m and the contacts were rolling in.  I went to 40m when Adam was done and the noise level was pretty high, but I was still able to log quite a few contacts.

As darkness set in (I missed the sunset), Jake mounted his camera on a telescope mount and started making some test shots with it.  I switched over to 2m FM to make some contacts with my Anytone 878 and MFJ  1714 half wavelength telescoping antenna.  It was pretty late but I managed to pull out a few contacts.  It turns out, I have a few local chasers with an alert set on my call.  Thanks KG6LI and N3XUL.

Adam got into the photography action and setup his camera for some night time shots.  I brought my camera but left it and the tripod in the car and was too lazy to go down and get it.  It was an excellent night for photography as long as you kept the lens up off the horizon that had a bit of smoke and visible moisture in it.  Adam got some excellent shots of the lookout tower against the cloud of the milky way and Jake got some good data to take back to the office for their computers to chew on this week.

By the time we left the summit, it was 69F, a respite from the heat we’ve had in San Diego.  It felt strange to pull on a fleece.   The 12.9 mile dirt road on the descent got old after a while but was perfectly safe.  In fact, it was better than the daytime because a) there was no traffic and b) if there was you would see them.  There are a lot of places where the road is very narrow so when meeting another vehicle, it meant one of you had to find a spot to pull off.  We were lucky that the two times we did run into traffic, there was a place nearby to get off the road.  I didn’t get  home until after midnight but I had a great time.  It was fun to be up there with a couple of geek  friends and play a little radio and enjoy the cool climate.