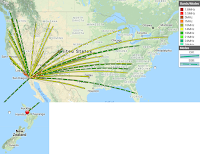 While on Hot Spring Mountain last weekend I talked to another ham buddy, John (K6MXA), who was on Mount Tule.  I wasn’t familiar with that one so I took a look at a map and thought that might be a good one to do this weekend.  I asked John about it and he mentioned it was a pretty easy hike, described the road conditions, and sent me his gpx track which I uploaded into Gaia GPS.  It doesn’t get any better than that.  I didn’t commit to doing it till Friday night however so it was sort of last minute.  For some reason, it had been a crazy week and I really needed to get outside and play radio for the day, but was having a hard time deciding if I would do it Saturday morning or Sunday. 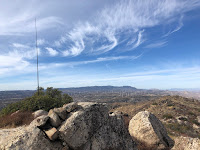 The trailhead was about 1.5 hours from the house by Campo, CA.  The dirt road section was a bit sketch but no huge problem for my Highlander.  The AWD kicked in a couple of times as I worked through areas slowly, not wanting to rack anything but a two wheel drive can do it.

The hike up had a road, then trail all the way up, and it’s only about a mile hike depending on where you park.  At the top, there are two bumps that are both in the activation zone, making multi-operator activations possible.  I setup quickly and started chasing a few stations. 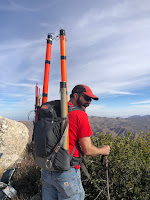 I had been talking to Adam, K6ARK, from my car on the way up.  He was on a summit just a few miles east of where I would be so when I got to the summit I wanted to make sure I got a S2S with him.  Just to be funny, I got my HT out and then called him, but using morse with my voice (dah-dee-dah  dah dit dit dit dit... etc).  I thought it was pretty funny.  It worked, but Adam came back and said he was trying to work a New Zealand station on HF.  He later told me that it cracked him up, making it harder to bang out some CW of his own to John ZL1BYZ in New Zealand.   I did eventually have a quick QSO with Adam to get the summit-to-summit (S2S) points though.

I chased a few more stations and then spotted myself on 20m.  I had quite a pileup of CW stations wanting a contact so it took me a while to work the queue down.  Once I worked the pile down on 20m, I did some more chasing of my own, then tried 17m, 40m, and 30m.  I had all day to do this summit and decided to just relax up there and have some fun.  I also worked some stations SSB (voice) including a S2S or two and I worked John, ZL1BYZ in New Zealand twice. 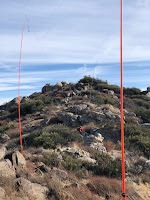 Adam mentioned that he would head over to the summit I was on once he finished.  He was on a summit that had never been activated.  When I see an unactivated summit around here now, I know why, because it’s HARD.  Adam knew it was going to be a tough bushwhack and it turned out to be just that.  John, K6MXA had tried and aborted and I probably would have as well.  Adam said it was probably the second hardest bushwhack he’s ever done.  Even though he was wearing jeans, his legs were pretty beat up.  Adam arrived at my summit sometime after 1PM hauling three pushup poles, two antennas, a switch box and other gear to do some A/B testing of a couple of antennas that he built.  The first antenna is a half-suare antenna that should give him a little gain on the outbound since there is some phasing that goes on.  It’s also a bit directional, but something that is hard to move because once setup since it’s staked into the ground it’s not like you can just rotate it with a button.  The other antenna was a simple dipole and both were setup for 20m.  Adam was hoping to contact some stations via SSB and ask for signal reports as he switched back and forth between them. 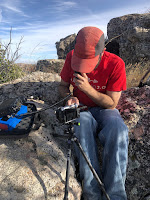 After Adam arrived, I did a little more chasing and then packed up and joined him at his station.  He had just finished setting up what looked like a very impressive station and got to work finding an open frequency to do some testing.  This turned out to be a challenge since there was a SSB contest going on somewhere east of us.  Once he found a frequency quiet enough to setup he spotted and got to work.

It was interesting to listen in during the testing.  Some stations didn’t hear a difference and others heard quite a bit of difference but not always the half-square.  There are multiple reasons why one would work better than the other but I’ll let Adam explain that.  He was working on a Youtube video during this test, so keep an eye out for it.  The video should be out shortly on his YouTube Channel.

Once Adam finished the activation and testing, we  walked down together and Adam gave me a ride back to my car since he was parked a lot closer than I was. 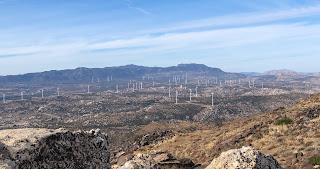 Temps today were mild, and with the slight breeze and high overcast, I needed a fleece to keep from getting chilled.  I managed to burn the side of my face while I sat and worked stations from the east coast to New Zealand.  I had a LOT of fun today.  It was a mixture of relaxing with nice views, playing radio, getting exercise outside and seeing a good friend.  I’ll definitely do this one again but not in the summer, it would be a scorcher out there.