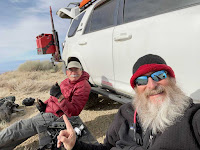 Today’s expedition takes me to Toro Peak, where I’ll meet Ted, aka W6TED.  We’ve both been wanting to do this one and it’s taken a little planning.  Ted contacted the Santa Rosa Band of Cahuilla Indians tribe that owns the land where the summit is located to see how we could get permission to access.   Ted eventually figured out the process to get a permit and after stopping by the tribal office, we had a ticket to play.  The cost however was a tad pricey, $40/person. 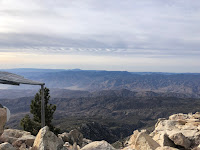 It took less time than anticipated to get to the tribal office, so we waited for them to open at 8AM.  The people that work there are super nice.  The official pass also came with a key that would open the security gates at the top.  It’s a bit of a drive but passable with my Highlander but I masked up and rode with Ted in his overlander equipped Forerunner which was an excellent ride, plus it got us there a hell of a lot faster than my rig would have gone as I would have spent a lot of time dodging rocks and large holes in the road.

Once on the summit we were greeted with high winds making it pretty darn cold.  The very top is loaded with antennas and other RF gear so we decided to setup just below the high point.  We had some options to get out of the wind but decided to use his truck to block the worst of it.  Had we known it was a drive up we probably would have brought more RF power but all was good.

We setup two different antennas, the K6ARK random wire that would give us the most options, and Ted’s linked dipole that would provide the most efficient output on 20/40 meters.  We then agreed to use a single radio and then just pass the paddles or mic back and forth to do a little summit to summit chasing and switching back and forth on the antennas as needed.

Adam, K6ARK, was scheduled to be on a desert summit with some radios and as he was setting up, I saw some chatter on slack.  When he was ready, Ted made a contact with Adam and then passed the key to me so I could get my contact.  Adam was using a radio where he took a pixy radio design and scaled it down using surface mount components where possible.  It’s officially called “the choking hazard” (pictured to the right).  If you look closely at the picture of it in his hand (below), you’ll see a little coper wire across the board.  That is the straight key used to send morse code.  The size made it hard to operate but that wasn’t all.  As he sends morse code out, Adam can’t hear the tones that he’s sending (called side-tone), all he can hear are the thuds as he makes contact with the wire.  What came out for us on the summit however was really nice tone and our signal report was 579, 7 being the signal strength out of a possible 9.  In short, that is amazing.  Adam went on to collect several more summit-to-summits and other contacts, bagging 19 contacts with about 800mw (less than a watt of power).  Amazing!!!  If you are a ham, his little radio is just pure gold. 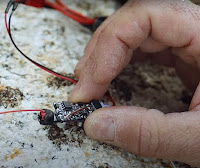 Check out the video below that Adam posted on his adventure where he recorded Ted and I contacting him for the first two contacts.

Once Ted and I finished chasing, we decided to use a HT hooked to Ted’s log periodic directional antenna (pictured here).  That thing was amazingly directional and with 5 watts, we were easily working stations in Yuma Arizona, 115 miles away.  The one downside... standing in the wind which was at-least 20mph, bringing the wind chill to 11F.  We were cold! 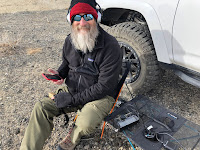 After that bit of fun, Ted broke out some hot miso soup, then we spotted ourselves on sotawatch but we split up, I’d spot on 20m and make contacts, then Ted took 40m.  This approach would be a lot less confusing to other operators on CW since they aren’t expecting us to send back “one more operator” like we would if we were running voice on SSB.

We had a fun time up on the mountain but we were cold and it was time to get out of the wind.  I bagged 34 contacts for the day which included 7 summit-to-summit contacts.  It was fun contacting people I know on other summits, like Darryl and Josh in Washington (who were in the snow) and Adam who was using his “choking hazard” radio.  And, it’s always fun working the station in France.

Given the cost of getting onto tribal land I might not do this again but if I ever wanted a perfect setup for field day or some other event, I’d think about it.  Heated seats helped warm us as we headed back.  All in all, a good radio day and we saw some very pretty country.