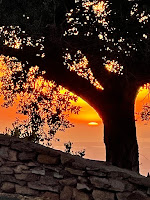 The Summits On the Air (SOTA) amateur radio hobby is a gamified affair.  Radio operators, geeks like me, summit various designated peaks (all have at least 500’ of prominence) and depending on the elevation of the summit, receive the alloted points for the summit if they make  four contacts and have not logged that summit more than once during the calendar year.  Some of my fellow SOTA operators had plans to use the rules to get double points on one trip to the summit of a designated peak by being there as the calendar year crosses over from 2020 to 2021 on new years eve.  Because the UTC day changes at 4PM local time in the winter where I live, it’s still daylight, making it easy to get points twice on a summit in one go. 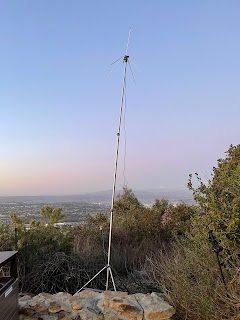 The summit is a little bump here in San Diego so I’m not bagging an epic amount of points but it will be fun on a couple of counts; 1) It was a novel thing to take advantage of the year change to double down on points and activations; 2) A lot of other SOTA operators would be  on summits doing the same thing as I was, giving me the opportunity to bag some summit-to-summit points twice (since you can only chase a summit once per UTC day).

Mt. Helix is a drive up, about 20 minutes from my house.  I loaded up my KX2 and also decided to bring a high power VHF setup in case I needed to hit some summits north of LA (spoiler, I didn’t).  The summit was pretty busy with people enjoying the views of the city, with some hanging out for what would be an epic sunset.  I made sure to setup on the edge of the park, away from any foot traffic.  My station consisted of my K6ARK end-fend antenna, the KX2, a 50w mobile VHF radio, and a ground plane antenna for for VHF contacts.

It took a little longer than planned to setup my station as I had to run back to the car for a connector.  Once I was up and running, I was really pressed for time.  I think I only had 20 to 30 minutes before the UTC day changed so I was making as many contacts as I could with other operators on summits via HF and VHF.  I also spotted myself and was sending really good rapid fire CW in an attempt to bag as many contacts as I could before 4PM local time.  Also, by spotting myself, I would attract some other summit operators that were only chasing. One of my fellow operators here in San Diego was just to the south of me and another was still hiking to a summit about 20 miles north of me.  He was really cutting it close and I think he was having to sprint to the summit with his gear. 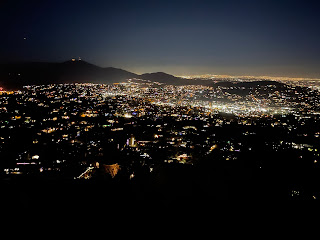 The coolest thing that happened is that I saw that my friend, Daryl, AA7OY, was on a summit in Arizona.  I chased him and completed the contact at 23:59 UTC.  I waited a few seconds, and called him back to wish him happy new year and log his summit again for a few more summit-to-summit points on January 1st, 2021.  I did the same for some of the other operators that I had just contacted minutes earlier.  It was a lot of fun.  Worked some other friends that were on a Washington summit in the snow but didn’t get them before the time change.  They actually never posted a spot because they were too busy chasing other summits.  They actually heard me calling another operator and asked me to go up 5 mHZ so they could contact me.

I had a lot of fun contacting friends on the radio on other summits and a few were at home chasing.  I bagged 11 contacts on December 31st, 2020, and 32 contacts on January 1st, 2021.  I also bumped up my count of summit-to-summit contacts, with a total of 10 summit-to-summit contacts.  As I packed up, the sun was setting and proving an epic show.  I look forward to doing this again at the end of 2021, but I’ll be sure to get an earlier start.

Epilog
When I got home, I realized I left my GoPro camera on the summit attached to my hiking pole in the bushes.  I drove back up to Helix to retrieve it after the park was closed and it was still there.  That was an adventure points bonus. :)