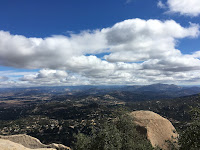 I went up to Black Mtn. a few more times to test various configurations and equipment, and to get some exercise but my next SOTA log would be Mt. Woodsen, another local mountain.  My friend Dave wanted to bike up using our ebikes.  I loaded up my pack and we were off.

After reaching the summit, we hiked past potato chip cliff and started setting up.  I was surprised at how much people were interested in what we were doing and although I think it’s a bit geeky, people do think it’s cool.  After setup, I realized we would get nothing..... If you can’t hear anything then you have a real problem.  We were setup in front of a ton of RF gear on the mountain.  Although we were a bit of a distance, we were down range of a lot of it.  Lesson learned, don’t setup down-range of microwave, VHF, UHF...

Second lesson, be flexible.  I brought my HT just in case I had problems.  We activated W6/SC-187 - Woodson Mountain at about 11AM after getting contacts from locals:

It was a pretty day and although I hauled and setup a lot of equipment for nothing, it was good practice, I learned something, and I was still able to check this off the list because I was prepared.