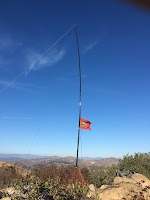 The expedition to summit W6/SC-453 - Twin Peaks was a funky one.  The trail starts at a park and heads up to a big rock pile.  The mountains are ugly but it’s a designated SOTA mountain so I need to check it off the list.

Sulu and I set off late in the day on the trail.  I looked at the map and knew that we needed to eventually take a fork to the left.  The good news is that we made it to the top.  The bad news is that we missed the turn and took a false trail that turned out to be a natural runoff scar.  I saw other tracks that made it look like a trail as well but we weren’t the only ones that mistook it for a trail.  When we got to the end of the trail, we had already done some bouldering and were about 100 yards from the top.  Rather than go all the way back, we bushwhacked the rest of the way.  The chaparral here is vicious, a bear to get through, and much harder than anticipated with a pack on my back and my pole sticking up.  (I’m talking about my mast people, geez)


After making it up to the top, the next task was to figure out how to set the pole in the rocks well enough so that I could extend and guy it.  The wind was from the west at about 5 kts and after scrambling around on the pile of boulders we were up and running.

Although the surroundings were ugly, the view was great with clear sky allowing a view all the way to the ocean.  The sun was heading down so I quickly went to work.  We first spoke to David (XE2AD) in Aguascalientes Mexico.  He was kind enough to speak english after I explained (and he figured out) the limit of my spanish abilities.  Next up was Gary in Calgary Canada (CG6AO),  I spoke to K6BBB in Redding, CA, and N4PN in Georgia.

The big reward of our efforts this day was... Japan.  VE3DZ, and VE5RAC.  This is the second time I landed such distant contacts.  The conditions were good for just a few minutes so we kept it short.  I know I was very weak but they were patient while they picked my signal out of the noise.  After that I decided to sign off (QRT) pack it in before it got dark.  I had enough problems getting up here in the daylight.

Our final reward for the day was a nice sunset and a much easier trek back to the car.  I’m happy to have that one behind me.