The Road to HAM

For my first post to this BLOG I’ll tell the story of how I got to ham.  It’s a long road so you might want to grab a beer..

Circa 1970s...
I’ve been interested in RF from a very young age.  When I was less than 10 or so, I was infatuated with radios.  I got my first walkie-talkie (a “handi-talkie” or “HT” in ham lingo) from Radio Shack with money I saved.  I had a neighbor across the street that I use to talk to with our radios when we were supposed to be in bed.  I strung a wire out my window, climbed up to the top of a tree just outside and attached it to a telescoping antenna and taped it to a branch.  I had no idea what I was doing but it worked.  We talked at night after school, and pretended to be pilots, another passion of mine.  The radio was metal, and had two channels that used crystals that could be changed to use different frequencies.


My next radio was a 6 channel, 5 watt CB radio from Midland with replaceable crystals.  I had to convince my sister to use the other radio so that I could test to see how far I could go before we lost contact.  Since we lived in a remote area, I was the only entertainment for her so she played along to an extent.  I remember riding my bike up a very steep hill at over 8,000’ (dedication).  I don’t think I made it to the top before we lost contact (less than a mile). 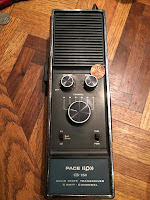 CB radio was beginning to be popular.  At some point I convinced my dad to get a CB radio for one of the cars and I remember using it on the freeway between Safford and Tucson.  Breaker breaker good buddy.

If I have my timeline right, we moved not too long after that to our summer home and my dad slowly moved his law practice from Tucson to the mountains.  There was no TV so I resorted to experimenting with my CB gear.  I ordered a ground plane antenna from Radio Shack and mounted it on a beam about 25 ft up on the back of the house.  I wish I could ask my mom what she thought of that.  I remember setting up an extension ladder and doing it myself.  I ran RG-8 down the wall along with a ground cable to a rod I beet into the ground.  We got some hellacious electrical storms and I’m amazed that it was never hit. 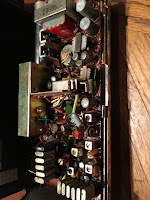 The house sat in a very small community surrounded by mountains so my range wasn’t much farther than my earlier test but at times I could get skip.  I somehow managed to get my hands on a tube amp for CB.  This most likely my dad’s doing.  The amp would output something in the neighborhood of 100 to 300 watts I think.  I had broken out of the valley at last!  Running at full power it was quite the heater but in the winter that just meant I didn’t have to run the room heater.  A bit later, I was able to get my hands on a solid state amp for the car.  I had no idea what I was doing but I knew the power requirements were way more than anything that I had.  Pushing the transmit button dimmed the headlights. But I really wanted in my shack.  The solution was to move a car battery under my room and hook the charger to it.  I ran some romex wiring up to my room and I was in business.  500 watts allowed me to hit all over the US.  I mounted it in a old ‘72 Ford Bronco with a large whip, and at times I could hit Florida, most likely taking advantage of tropospheric tunneling or skipping off of the E layer.  Yes this was illegal but I think the statute of limitations has run out on that.  (Now I stay legal which isn’t hard to do).

My next foray into radio was in airplanes.  I became a private pilot at 17.  I didn’t use the radio much flying in rural Arizona.  My most memorable episode with a radio at that time in my life was using an old radio in a 250 Piper Comanche, a low wing, retractable gear aircraft.  It was a raggedly dog of an aircraft but I loved it because  it flew fast and I could put it down in strong crosswinds.  One of the issues with it was that when the radio got hot, the transmitter quit working.  It quit transmitting on my way into Tucson international one day.  The airplane only had one working radio. I could still hear approach control but they couldn’t hear me. In order to communicate they asked me to hit the ident button on the transponder to acknowledge. Doing so lights up my blip on radar.  That allowed me to acknowledge instructions and continue.  They vectored me into the approach and the tower gave me a green light (yes, a light they shine at you in such occasions).  After that eppisode, I just turned the radio off during long flights to ensure I had a working  radio when I got to my destination.  At 18 years old, shit like this just doesn’t bother you and I’m sure I didn’t tell my mom.

College came along and no more flying until much later when I took it up again in San Diego.  In southern California, the busiest airspace in the US, you need to use the radio all the time.  The aircraft normally had two working radios and were solid state.  When I learned to fly instruments, the radio was even more important.  There are certain procedures you follow for lost comms but having a backup plan was better.  I purchased a JRC aviation radio to keep in my bag.  With age, I had grown a bit more cautious.  :)

In August of 2017 a friend of mine at work, KK6TML, got me interested in amateur radio.  VHF/UHF radios are great in a disaster situation and I figured that was a good enough reason.  I got the book “The Fast Track To Your Technician Class HAM Radio License” by Michael Burnette and read it over the weekend.  I downloaded the ARRL license test app for my phone and never failed the practice exams.  I passed the test on Sep. 16th and was anointed with the call sign KM6MRQ.

I really like Yaesu radios, they are built tough and are reliable.  For my first VHF ham radio, I ended up purchasing a Yaesu FT-70D, a new dual band model that supports their digital mode.  I learned how to use the repeaters and tried to find out my max range with a high gain wip antenna.  I eventually installed an antenna on the roof so that I could listen to the various nets during the week.  I wanted to try HF, but that required a general license so I purchased the next book from Michael Burnette (Fast track to general) and studied.  It was more difficult than I thought but after a couple of weeks of reading, and taking practice tests I figured I’d give it a try.  I gave myself a 80% probability of passing and on October 7th I took the exam and scored a 100%.  I was very surprised. 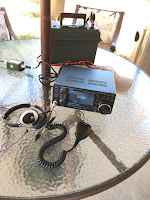 After much research I purchased an Icom IC-7300.  This radio packs one hell of a punch and has the most bang for the buck of any radio.  Yes, I’m partial to Yaesu.  I looked at the Yaesu 991A, a shack in the box, but nothing can touch the usability of the touch-screen on the 7300.  All of Icom’s competitors are still trying to catch up and are at least a year behind them when it comes to usability.  For pure quality, in all aspects, it may not be the leader but for a beginner like me it will have everything that I need for quite some time.

I installed a dipole antenna in my attic and fired up the 7300.  The noise level was so high it was completely useless.  I literally laughed out loud.  I had built the best RF noise detector in the neighborhood.  From here my mission was to rethink my “shack” and more importantly, my antenna.  I found that the biggest source of noise was coming from the inverters attached to 22 solar panels on the roof located just a few feet away from the antenna.  The second biggest source of noise was just feet from the transceiver, the LED lights over my desk!  More laughing.

A few weeks later I established my first HF contact from my back yard connected to an end-fed random wire antenna from Palomar Engineering, an a LifePO battery hooked to the 7300.  K8TE in New Mexico was kind enough to come back to my CQ.  It works!!!  Mission accomplished.

Not long after my first contact I decided to change my call sign to a vanity call sign before I established a large log-book.  I’m now known as N1CLC, a call back to aviation (N1), and my initials (CLC).

As it turns out, I’m not planning on buying more power and pushing the limits of my home associations because I prefer doing something called SOTA, Summits On The Air.   I’ll leave that topic for the next post.

If you have read this far, I thank you.  I know this was a long road to understand my road to amateur radio but as you can see, it’s been there all the time, like the force.