Today’s SOTA mission was to a mountain in the Lagunas, W6/SD-026 - 5764.  This trip had a bit of a surprise.  Not like a couple of days ago when I scored a QSO with a guy in New Zealand.  Today’s surprise is just seeing unexpected vistas. There is a shocking view from a lookout going up the Sunrise Highway that looks out onto the desert, down several thousand feet.  I enjoy the Lagunas because it’s nice getting up in the pines, cool air, and not seeing a sole on the hike.  It’s not all pine but it’s a hell of a lot nicer than the pure rock piles around my house. 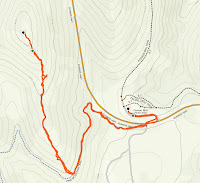 Summits On The Air (SOTA) is similar to geocaching.  It pulls you out to places you wouldn’t normally go on a typical weekend making each SOTA activation fun due to the exploration aspect.  SOTA also poses a small challenge to figure out the rout, do some recon on-line, and I get a nice hike... and yes, get to play with my ham radio toys.   I’ve enjoyed the several trips I’ve taken out to the Lagunas.  Another small surprise was making a contact in Hawaii.  The last bonus was that I finally got a confirmed SOTA to SOTA contact on HF.  Kent, N6WT, was activating W6/CC-028.  It’s a mountain just north of LA.  He came in very week but we were able to communicate.  I think he was running low power, he gave me a good signal report.

The trip up the mountain was easy.  There is a very heavily used trail that I took for the first half mile then turned to head up the mountain ridge to the summit.  Adam, KJ6HOT, gave me the info I needed to get started and mentioned that it was marked with cairns and the path a bit overgrown.  It was clear where the turn was but I never saw the cairns.  The chaparral isn’t as thick here so it was easy to pick a path and rejoin what looked like the trail.  (You can see the route HERE.) 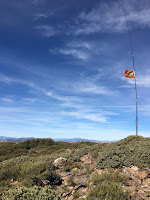 As I got closer to the top, the wind was blowing pretty hard.  I think the temp was about 60 but the wind definitely chilled me down.  After putting on another layer, I went to work.  The summit had a metal fencepost sticking out, allowing me to easily secure the mast section of my MPAS antenna to it.  I thought I could avoid using guys, but after putting up all the sections, the wind was really bending the antenna over.  I put one guy on the windward side to take some of the pressure off.   As you can see from the picture, the antenna is bent over pretty good in the wind.   I setup my operating position off the peak.  That position, and being on the ground got me out of most of the wind, and therefore a bit warmer.  I used my voice-activated headset, and I had a bit of an issue with the wind kicking on the transmit at times.  A small adjustment seemed to fix it.

Just as I got setup, my brother called me and let me know he was almost at my house.  I had forgotten he was dropping by on his way to Tucson.  He was going to drop something off for me and take a quick pit stop.  I told him how to get in and asked if he would turn my radio base for a quick VHF test from my position.  Using just the whip on my radio I was able to get into the house but it was pretty scratchy.  He got out on a quick test no problem.  Range was 37 miles and I don’t think I had perfect line of site so I was getting some bounce action.  I had the jpole with me but I didn’t get it out for a test. 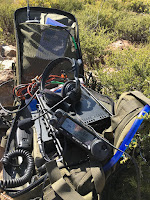 Today was “winter field day” for Hams so the band was packed with other operators.  Field day is a day that encourages hams to go outside, anywhere and operate completely portable, without commercial power etc.  For me and the rest of the SOTA operators, every outing is “field day”.  Some guys have huge mast systems on trailers, others are like me and go for light and portable.  Some are 100 watts, some operate “QRP”, low power at about 5 or 10 watts.  QRP is a challenge to see how far they can go.  Getting contacts today would be easy for me today.  Finding an open channel to call “QC” proved a bit more difficult.  I picked what I thought would be good.  I had stations just above and below me and my first contact suggested I move up 5 so I change frequencies and went back to work.

I had planned to do a second summit but decided to sit in the sun and relax instead.  After I filled a couple of pages in my log, I decided to try 40 meter.  After hooking up the antenna tuner I found 40 meter to be pretty quiet.  I did a self-spot using sotagoat app on my phone and made a few contacts.  Most were in the western US.  Band conditions are at the absolute worst right now but it did work.  I had a nice chat with John, K3JH, about about what we both like to use for SOTA activations and his plans to get back into it after knee surgery.  I also talked to one ham twice.  Chris, W7AMD,  saw my spot on both 20 and 40 so he decided to just try and see if it worked.  He was actually waiting for a friend of his doing SOTA at the same time.  Hopefully they connected.

The express down the mountain was easy.  I let Sulu take the lead and she did a better job than me finding the trail.  It’s amazing, as soon as we hit the intersection with the other trail, she turned left with confidence.