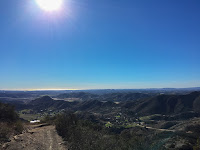 Another surprise today.  This hike was much harder than I thought it would be... very hard.  The plan was to do an easy hike up to W6/SC-445 - 1715, located near the Pala casino north of Escondido, CA, about 40 minutes from my house.  The satellite recon showed a road all the way up to it and I didn’t pay attention to the story the topo was telling me.  If there is a road, then it can’t be too difficult since they need to get trucks up there right?.  WOW, was I wrong.  It was about as steep as the final climb up to Laguna Benchmark SOTA that Mike and I did a couple of weeks ago but longer.  It was very steep starting 100 feet from the car and the first climb was about .8 miles.  There were two more very steep sections. The road hasn’t been used in ages.

This was a mandatory hiking pole climb.  With about 32 lbs of gear and water on my back, I would have had turned around without poles.  For the hike down, I would have fallen on my butt a few times on the steep loose dirt.

The temp in the car said 80 deg, but the wind was blowing over 20 mph gusting to 35, so I didn’t get hot, but I was dry as hell.  Given the wind, it was clear and a million. In the photo above, you can see all the way to the ocean.  Yesterday I needed a little top cover to stay warm and passed snow on the road.  Today was a 180 from that.  This was the longest sustained steep uphill that I’ve done.  It was a good training hike for the grand canyon and I gotta think we won’t see anything that steep when we leave in two weeks.  The road was in very bad condition in places, and there were a few spots I needed a machete or something to clear the piles of tumbleweeds.  You can see my route on alltrails.com HERE.  It was a 1,300+ foot climb over about 2 miles.  I'm pretty sure the SOTA dog was not happy.  Nothing to chase, and lots of brush. 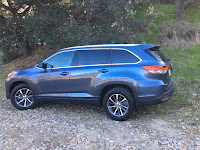 My first contact was a summit to summit with another SOTA operator, Garret, KM6OIN.  He was activating W6/CT-005 - Throop Peak, which according to Google, is about 81 miles from my position on the mountain.  He came in perfect.  His page says he was probably using a directional antenna hooked to a 5 watt HT.  That would explain it the awesome performance. I also talked to him when I was on Los Pinos on the 20th and he was using the directional that day as well.

Band conditions were worse than yesterday.  The noise level on 20 meter was about 3 on the meter and I had a very tough time pulling people out of the noise.  I saw this morning that the band conditions were better on 40, so I switched to that and got a few more and called it a day.  20 meter sucked, quality on 40 was better but not by much.

The egress down the hill was accomplished in about 45 minutes.  Sulu and I were mega thirsty and it was great to see the car.  We were both a little cooked and dried out.