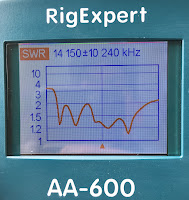 I recently picked up a Chameleon CHA MPAS antenna with the Mil Extension (CHA MIL EXT), and their ground spike for portable & SOTA work.  The primary reason is that sometimes, the summit is going to be too busy with people to setup my dipole rig.  Cowles mtn is a good example.  Another reason is that I may want the option of setting up faster (5 minutes) rather than goofing around with the dipole.  Mountain tops here don’t have trees so my dipole setup is a mast, guys, and an inverted V config.

I wanted to do a quick setup and function test before my next hike to my main test area (Black Mtn.) or the next SOTA mountain that I want to check off.  My initial testing was at a park on the top of a hill (Hilltop Park) in San Diego.   I setup at two different areas and used a Rigexpert 600 antenna analyzer to gather the data.  I mainly focused on 20 & 40 meter bands and I wanted to know how tunable the antenna was and if I could get out.  The bands weren’t busy and I was wondering if the antenna was going to work at all.  My opinion changed when I had a quick QSO with a guy in Puerto Rico, Vancouver, and another in Nevada.  I guess it’s working. 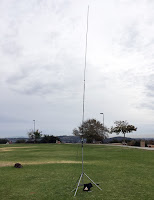 Note:  I’m a newbie at this (licensed general about 3 months ago) so if you find any errors or have any suggestions, comments, etc, I’d really appreciate you commenting below.

One other note.  The SWR readings are from the graph are estimates based on the graph visual (supplied) and not exact readings except for the median freq.  I could have taken a reading at each end but I really didn’t feel it was needed.  Also, the analyzer is new but I’ve never had it calibrated or bench tested. I could have the most exact data in the world but the data variations produced by different soil, moving the counterpoise just a little, and the way I had my tongue hanging all bump my test results one way or another.  As a ham, you know that there are about a 1000+ other variables that come into play during actual use.  My sample data has three points and it is directionally correct.  Reproducing the tests  at three sites were pretty much +- .2 SWR.  The analyzer pictures have additional data that I did not cover.  Take a look and let me know your thoughts. 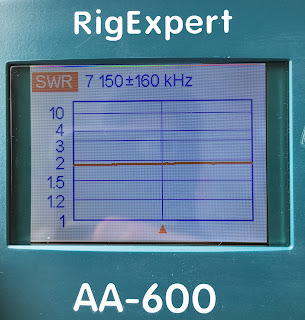 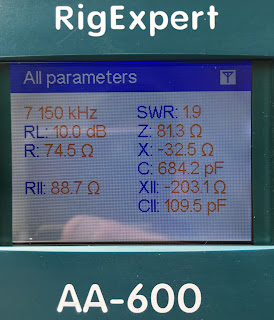 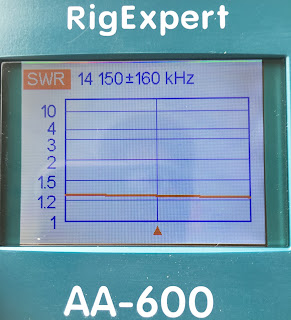 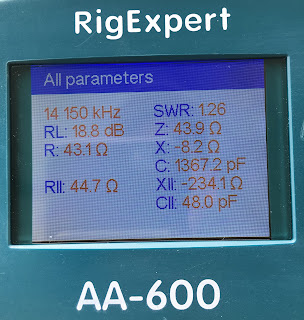 I’m not going to bother showing the difference between 14 and 6 feet because the data is +- .2 SWR.  I did find that my house is consistently lower but noticed that just changing the position of the counterpoise bumped the results a bit.  It’s also possible that the soil, which is dry compared to the park, may have had some influence.

Sticking this thing in the ground also works well, which really surprised me.  I’m guessing actual performance won’t be the best, but for gun and run it will get the job done. 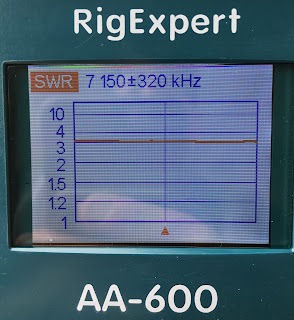 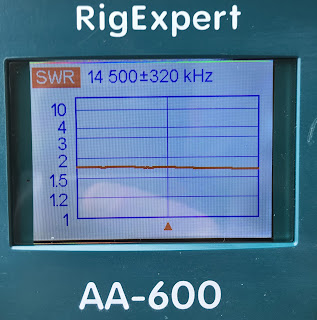 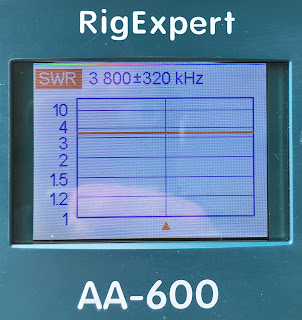 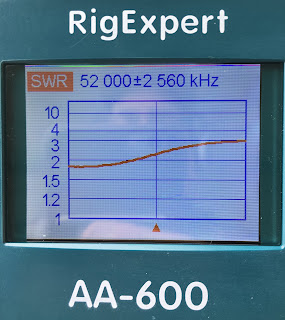 My final test was to see if it would be tunable without the matching unit.  As you can see below, the 20m band was tunable (I used a MFJ-939Y tuner), but the tuner wouldn’t bring in the 40m band.  When the tuner gave me the warning song when trying to tune 40m, I didn’t bother hitting the radio SWR. 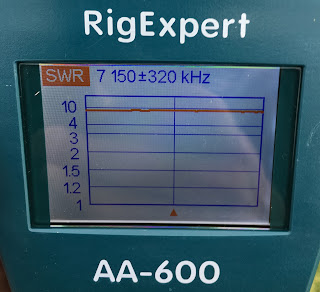 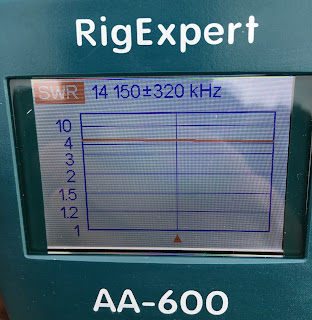 I’m happy with 20m and 40m.  Those test results are not only tunable, they show that I can get by without an antenna tuner for this config.  I made a couple of QSOs without the auto-tuner and made Puerto Rico just as the band was headed south.

I did a bunch of research when looking at end-fed verticals.  The biggest influencer was Julian at Survivaltech Nord, OH8STN.org.  His YouTube videos covered the Chameleon and Alpha antennas in depth.  I’m happy with the CHA MPAS, it  lives up to his review as far as portability, build quality, etc.  Yes, I’ve only put it through one test (3 setup / breakdowns)  but I think this is going to work out great.  I considered the Alpha and dropped that idea after I saw his review and some others.  I also considered the superantenna that Julian is currently reviewing (I think he has three videos of it) but I took it off the list because it was heavy and I didn’t want to futz with the tuner on the loading coil when on a mission.  For SOTA work, I mainly work 20 and need the 40 meter when conditions are bad. The CHA MPAS seems to do both easily (I wish I had done a QSO on 40m but I ran out of time).  I’ll do that in the next week.

Summary of tests and what I learned: 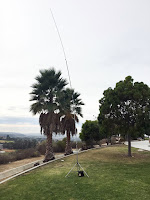 This is the first shot I’ve taken at doing any kind of published testing that should be reproducible and pass a peer review since I’m using an empirical approach.  I did this because I wanted to give something back.  As a new Ham, one of the things that is really difficult for me is evaluating the difference in performance (actual use, not SWR)  between different antennas, dipole and the vertical setup in this case.  I know that the dipole is the gold standard (yes, yagi and other directional are top dog but not for SOTA work).  I like to maximize my DX when on the mountain and I’d love to know how much I’m compromising.  When I skip 3,200 miles on my first time out, I guess I really shouldn’t bitch.  I do SOTA mainly because living in a neighborhood means that my home station is one giant compromise.   I have a clear shot to the east off the top of the hill from my house via a 45’ gap (between houses).  If it weren’t so unsightly for my neighbors, I’d get something above my roofline.  If I did, I could get a good 270 deg beam shot off my hill.

If you have any thoughts on my analysis, performance of the this vertical vs. dipole, comment below.  I’d love to hear from you.

Super big thanks to K7CAR  for allowing me to butt in during his CQ time and connect with WP4CTD in Puerto Rico.  Kent also came back to me two more times as I was testing different locations.  This was super helpful and fun.

UPDATE:  I've just posted results of some practical tests HERE.  Check it out!

Contacts for today (all on 20m)