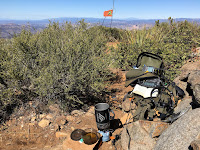 I was planning a hike in the same general area as yesterday but I talked to a guy that was on W6/CC-039, Viejas Mtn.  It peaked my interest so I looked it up.  It’s near Alpine, CA and about 40 minutes from my house.  The hike is about 3 miles round trip.  After yesterday’s 5 mi,  decided to do this one.  It was a crystal clear, a little cool with some wind.

The trail starts off with a good solid climb about 50 feet from the car.  The trail is well cut and used and pretty heavily but it’s rocky.  Once up on the ridge, it’s a simple 1000 feet to the high-point.  When I arrived on the summit at about 11:30, it was blowing about 25+ mhp.  After I cooled a bit I put on a layer and got the JetBoil ready for some tea. 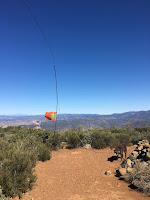 I took my time setting up and talked to some other hikers.  About the time I completed my setup, I heard a guy on another summit on my handheld radio.  I reached out to him and we made contact.  Our summit to summit distance was 50 miles and both of us were using a small whip on our 5 watt radios.  He was on W6/CT-103 with another ham.  He was pretty scratchy but readable.  I pulled out the Slim Jim dual band antenna for my HT to test it out.  I hung it quickly and he mentioned that I was about two-times better signal strength.  I was picking him up better as well.  I just tossed the antenna up quickly so I think if I had hung it a little better I would have had even better performance.  Some of the people I know in San Diego also called, it so it was cool to do some local 2 meter FM work from up there and test the j-pole.  As you can see from the picture on the right, it was blowing pretty hard.

My operating position (picture at the top) was very comfy.  The rock wall gave me really good cover from the wind and the view was to the west was clear all the way to the ocean.  Really relaxing.

I fired up the JetBoil and had boiling water in about 2 minutes and a nice cup of hot mint tea brewing.  As the afternoon rolled by, the wind died down.  I picked up over 20 contacts and I spent some time meditating.  I noticed that a guy in CO posted that he was on a 14,000 peak was doing a SOTA so I called him and got another summit to summit and then shut down. 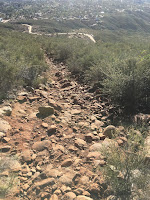 The descent really got old after a mile.  The rocky surface was starting to grate on me.  The mountain is one giant rock pile and I think the trail was giving birth to more while I was on top.  I was glad to reach the car.  I headed over to my favorite Mexican restaurant in Descanso and picked up dinner and headed home.

(Note: You can click on the pictures for a larger view)