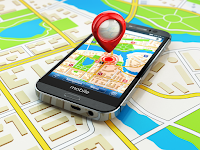 I decided to do a review of two navigation apps.  My summits on the air activity takes me into some less traveled places to do my summits.  Planning is really important on some of these trips and I was frustrated with AllTrials because it doesn't have any markers on public/private land so doing advanced planning is difficult.  I've been thwarted a couple of times because my planned route took me into private land and I couldn't figure out how to re-plan or if I could walk around the property.  There is a web site out there that shows some boundary info but it's a pain to use. So here goes...

I downloaded the top two apps that have have had very high ratings by others and recommended by guys that do my activity.  I've  been an AllTrails user for a while and really love it but it's time to look around.  In order to get the level of features I need, I purchased a pro subscription for both, under $60.  I need more experience in the field with GAIA and if anything substantially impacts my experience, I'll update this review.  So lets' get to it. 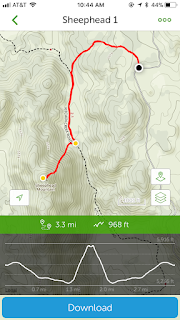 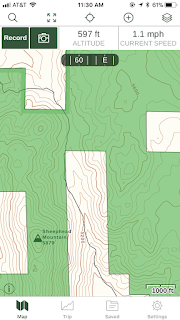 Navigation App Summary.
If you like to hike well established trails, or are looking for park trails etc, I recommend AllTrails.  If you are a little more hard core and or doing peak bagging or an activity like mine, you need both but if you have to save, GAIA has more features, and use free AllTrails for the community.   But here's a small update, I really want to like GAIA but every time I'm looking at going onto a new peak, something I do a lot, GAIA is useless compared to AllTrails.  Just today I brought up two mountains to the east of me on web versions of these services.  On AllTrails, I quickly got a lot of good info and a summary and had the trail loaded up and ready to go vs. GAIA that had nothing at all on both of these traveled spots.  On GAIA, I couldn't even find the trail on the maps so it's hit or miss but for now, the bottom line is AllTrails just works better, GAIA has a cool user interface.

I'm sticking with Alltrails.com and it is my #1 choice.