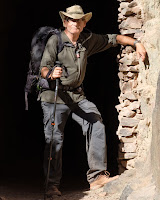 This trip is about our grand canyon adventure.  No ham radio on this trip.
NOTE: Click on picture to enlarge.  All pictures HERE.

Our trip to hike the Grand Canyon was a fantastic success, weather, trail, and accommodations.  We had been doing some training hikes, culminating with the Hike to El Cajon.  We were definitely ready.  It started off with a lazy departure on Friday in the morning from Traci and Mike's house.  We took I-10 and then winded up through Prescott where we had an Italian dinner with their son and got a tour of their house in Prescott.  The rest of the trip to the canyon was uneventful and we arrived about 10 PM and checked into the Maswik Lodge.

On Saturday, we got up early, checked-out and had breakfast.  We drove over to the information center and met up with the group that setup the original reservation.  We were able to go on the trip because of some cancellations from this group.  We were lucky because you generally need to make reservations 18 months in advance.    We caught the 8AM bus to the departure point, South Kaibab trail.  There was the usual ceremony of taking pictures in front of the tail head sign and then we were off.

The initial sight of the canyon was stunning and we were all excited to get on the trail.  There were ice chunks on the trail but they were pretty easy to avoid.  The group we were with were excited to finally get going and there was a lot of chatting and laughing during the descent into the canyon.  The initial views were amazing and drove home the geologic history of the planet.  Jeanette, Traci, Mike and I pulled ahead of the rest of group and sat down for a nice lunch. I enjoyed the views but not the trail as it was hard pack and a constant pounding stepping for 99% of the way down.

The weather was absolutely fantastic with clear sky’s on the way down.  There are metal pins holding the logs down and I noticed that they looked like they were caped with turquoise… Actually, it turned out that the polished surfaces, most likely from boots scuffing over the top, reflected the turquoise colored sky.  That is how clear and crisp it was.

The trip down via South Kaibab was somewhat punishing because of the constant steps down so after 8.2 miles and 4 hours of pounding down the steps our knees were aching.  Although we found that the Bright Angel trail would be an easier decent, the South Kaibab trail was worth it because the views you get are completely different than Bright Angle tail and it provides some fantastic vistas.

As we approached the bottom we caught site of the two suspension bridges that cross the river.  As the trail approached the Kaibab bridge, it went into a small tunnel through rock that takes you onto the bridge.  Once across the bridge, the trail is mostly flat and runs along the colorado river.  We take a slight turn go go up Bright Angel Creek, by the campgrounds and arrive at Phantom ranch which is probably a mile from the Colorado.  It was a tad warm and a cold beer and lemonade for me was a welcome sight.  We settled into our dorms and relaxed for a while. 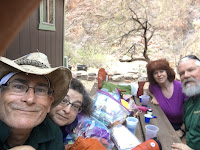 After a bit of chillax it was sundowner time.  I brought some wine, Mike brought his extra agave tequila and we had tons of great snacks that Jeanette and Traci put together.  After a bit of relaxation we fired up the JetBoils and cooked various meals.  Mike and I had Beef Stroganoff with Noodles.  It’s easy to prep, just boil 2 cups of water which takes exactly 2 minutes on the JetBoil, pour it into the bag, mix, wait, and eat.  Traci and Jeanette had a similar meals but a little more complex to put together.

After the ranch kitchen served the last group and opened for all visitors, we had a glass of wine there and played a game of Liverpool.  I think Jeanette and I tied for first place.

We retired for the day to our respective dorms, one for women and one for the guys.  It was comfortable and not as noise as I thought it would be.  I felt like I was back in the army but with less space.  I was tired from the day’s activities and slept OK.

There was rattling around at 5AM for the guys that were part of the early breakfast.  Our group was in the 7AM feed.  Breakfast was served with lots of eggs, pancakes, sausage and bacon.

We took a day hike up Bright Angel creek that gives you another taste and experience of the canyon.  The trail was flat and a joy to explore in the morning with cool temperatures and a slight breeze.  (Note, The trek recording shows 6 miles but it was more like 6.5 miles since I started the recording a little into the trek.)

I decided to meditate next to the stream on the way back and everyone else went ahead.  It was a nice time to connect with the land, sounds, breeze, and smells.  About 25 minutes in I heard a small scratch, scratch, scratch.  My day pack had been discovered by the local squirrel.  He was an experienced little guy so he was immediately attracted to my day pack that had food (I’m sure he could smell it.).  As I wrapped things up and headed up to camp, I realized I had sat near a tree that comes straight out of the wall.  The tree was very odd looking jutting sideways out of the wall, especially given its size.

I passed through camp and headed over to the silver bridge, one of two that span the river, to get some pictures in good light.  Out egress out of the area would be very early the next morning so I want to ensure some decent pictures.  The mission was accomplished easily.  The sun was starting to set so I also snagged a few good pictures of the hills from the bridge as well.

After a bit of chillax, the four of us had a sundowner and then headed over to the lodge for dinner.  The lodge served beef stew and cornbread and it was quite tasty..  After dinner, a young couple came into the ranch at around 7:30PM, in the dark!  They got a very late start off the rim. It must have been exciting to come down the trail in the dark with just headlamps.  I think they left at 3pm so I’m sure they got some great vistas but stepping off the trail and over the edge could definitely kill in places.

We got up at around 5:30 the next morning, before the sun was up. Mike and I hauled our packs outside to complete our packing and then made coffee and have some breakfast.  I decided to use one of my 800 ml bottle for the coffee and other stuff as neither us figured I’d need it for the hike given the weather.  Why haul more than you need given there are water points along the way.  I somehow managed to pull a small cotter pin out of my JetBoil after making my coffee and it fell apart.  We had three units among us so it wasn’t a problem.  Luckily, I found the pin and fixed it when I got home.  While I was hunting down the pin and making a final adjustment of my pack, Traci and Jeanette headed out.  They probably got a good 15 minute lead on us but I was in no hurry to bug out.  The sun was just coming up, great for pictures.

The trip back up via Bright Angel is longer, 10.3 vs. 8.2 for the trip down, but it is beautiful.  After crossing the bridge, the silver one, it takes you along the river a bit and then it turns up a canyon that has some really nice streams and waterfalls.  We passed all kinds of terrain from sand to rock, to semi-forrest. I enjoyed every part of this trail.  We never hit any super steep areas on the way up.  Sure, the last three miles were hard, but when I get into a rhythm with my poles, I can really trek..  I stopped often to take pictures or just soak it in and there was a lot of picture taking.  I really wanted to absorb the canyon.  Mike was a great hiking partner, he laughed at my jokes and was perfectly happy to let me stop, take some pictures or just goof around.  I was on vacation, and I had the entire day to summit.

The temperature cooled as we climbed up the rim and stayed at about 40 deg.  At Indian Gardens, the winds picked up it got a chilly, even under working conditions.  I had on a hiking shirt but I put on my a fleece and some long-fingered cycling gloves that were just warm enough but not too warm so that I wasn’t sweating in them. That, along with my my buff and biene, I was very comfortable.  Having cool air to breathe was a huge bonus as we started huffing up the hills.

Traci and Jeanette summited over an hour ahead of us and waited for us in the bar.  Although I enjoyed the ascent, it was fun to finally summit and retire to the bar for finger food and some hot drinks.  When I got up to use the restroom I had a horrible cramp in my right hamstring.  I was hobbling around the lobby getting some very odd looks from people as I tried to rub the knot out and make it back to the bar.  I drank as much water as I could and we headed out.

Just as we were leaving the bar, we ran into our friends from India.  We had a great time with all of the group that we were with on the trip with. They looked happy to have made it through the ascent.

We capped off the day with a nice top shelf dinner at El Tovar in the village.

Our departure was marked by snow flurries on Monday morning which I thoroughly enjoyed.  We headed into Williams for breakfast where it was windy and snowing.  The snow ended not long after leaving Williams and turned into rain.  A good portion of the storm was to the south of us and the rest of the trip was uneventful.

The views from the village of the Canyon were really something but the best way to really experience the canyon is to hike it.  You are in it, get to feel it and experience things like sunset and sunrise and all of the other lighting that comes with it.  You live with the canyon, breaths as it breaths, sit zazen as the canyon sits zazen.

Uggg.  Back to work.

Email ThisBlogThis!Share to TwitterShare to FacebookShare to Pinterest
Labels: hiking