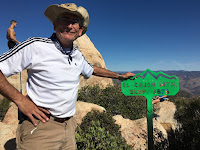 OK, I am renaming this mountain to “El Cabron”.  This is the most difficult hike I’ve ever done (outside of the army).  Today’s objective was to tackle W6/SC-115 - El Cajon Mountain, a peak near San Diego.  Mike, Traci, Jeanette and I leave for the Grand Canyon next week so we wanted one more training run.  I was not prepared for how grueling this hike would be.  The length, 12 miles, was known, but how many steep climbs there were in both directions was a surprise.  All of us launched early to avoid the certain heat.  I switched my gear to the pack I was taking to the Grand Canyon and it was about 40 lbs.  The pack is too small for my torso but will work for the trip.  (Alltrails route info) 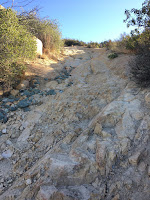 I’m no stranger to very very steep ascents, like the ones on Poser Mountain, Sheephead Mountain (I did Sheephead again yesterday), and Hill 1715 near Pala.  What made this so difficult were the multiple steep climbs in and out of canyons in both directions.  The peak was only 3,765 but I felt we did this multiple times.  I don’t mind the climbing, but when there is an immediate descent that erases all the work, it is a bit demoralizing.  (Remember this when I start talking about the return trip).  With a 40 lb pack on, I used my poles like a four-wheel-drive jeep and I was actually surprised how well I did.  Some of my success must have been the espresso and motrin cocktail I had before departure.  My feet were a little sore from Sheephead yesterday so the motrin would help.  (click & zoom in on the picture on the right.  The dog is at the top) 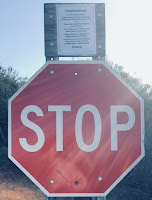 Two other factors made this more difficult, walking on granite most of the time, and the afternoon heat.  I would say that 75% of the trek is literally walking on solid rock.  Seriously, we were walking on giant boulders or groups of them, as well as  rock fields.  We weren’t crawling over boulders, just using them as road.  Even when I was on dirt, my sharp tipped poles only went into the earth about 1/8 inch.  We got an early start and got on the trail at about 6:55 as the sun was coming up so it was cool.  It took a little over 3.5 hours to summit, and although tired, I felt good.  The descent, which I would start at 11:22, was warming to a very toasty 85 deg F.

I was the first of the group to arrive at the summit and started setting up  so the rest of the crew wouldn’t have to wait for me.  Because there there was zero wind, I was able to setup the MPAS antenna just off to the side of the peak with no guy ropes and was on the air in about 10 minutes.  I found some nice shade and setup my operating position.  I felt great.

I found a frequency that was open, 14.337 (Cessna 337 was one of my favorites).  I was getting ready to post an alert on the SOTA site when Adam of KJ6HOT called me.  He saw me pop up on the spectrum analyzer on his new Icom 7300 and zeroed in on me while I was calling “Is this frequency in use”.  I have an IC-7300 radio also and I love it.  Adam and I have spoken on the radio and email several times and he has been a big help in offering advice and trail routing for my Laguna hike.  In fact, right after I setup on the top of Sheephead Mountain the first time, we talked on VHF (using my hand held).  After we concluded our chat, he placed a alert  on SOTA Watch so other “chasers” could find me and the party started at 18:29 UTC (10:29 AM local). 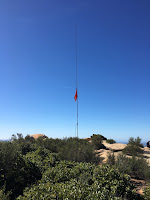 I had a nice pileup and spent about 40 minutes collecting 26 contacts and talking to people that were in very cold conditions and snow storms from eastern US and Canada.  Ofcourse I let them know I was on a mountaintop in 80 deg weather with a million mile visibility.

Just as I was breaking down, Jeanette let me know the rest of the crew was headed down the mountain.  I packed up quickly and then stopped to talk to a guy that was shooting video with a quad-copter, a DJI Spark.  He pulled it out of a little case, unfolded it, and it took to the air.  The thing was amazing.  It maintained position even in a slight breeze.  I hope to find the video on Facebook but have yet to see it.  When I do find it, I’ll update this post.

I ate a bar with chocolate and some nuts and noticed my water bag was leaking a tad... Hmmm I wonder how much water I lost.  It was leaking because the pack was on the mouthpiece and I didn’t close the valve.  I started my descent at 11:22.  The first portion was very steep, with a ragged trail over rocks.  I managed to keep from taking a header off the rocks using my poles and then headed down the second descent.  By now it was pretty hot.

After the initial descent, there were two very steep climbs over and through canyons.  I caught up with Mike and Traci.  I got a little cooked (overheated) and I’m not sure I had enough to eat at the summit so I might have been bonking as well.  This hike just turned into a tough return to the car and I still had 5 more miles to go!

Shortly after this, I ran out of water (not sure how much I lost up top).  I remembered my army desert training and soaked my handkerchief that Jeanette gave me with with the rest of the dog’s water from the bowl.   It was like turning on the AC.  After a couple more hills, we finally got a small breeze.  Jeanette was way ahead of us.  She was smart, and used her time at the top to kick her boots off, eat, drink and re-energize.

On one gravel covered solid rock descent I went down a couple of times, sliding on the gravel that was on a solid rock bed. No injury, but it was tough getting up.  Mike and I lagged Traci.  After one decent, I didn’t see mike so I stopped in some shade and waited for him.  I got a report that he was fine but was waiting for one of his dogs to recover.  Chula, the mutt from Grand Canyon, had been running all over the place and had overdone it.  He came down about 10 minutes later with a dog that really didn’t want to go.  I reasoned that we really didn’t HAVE to be in a hurry.  If things got bad, all we needed to do was wait till 3 or so when it cooled. 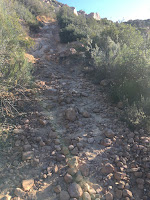 Mike and I passed a young Indian man a few times who was cooked and going slow.  He had water and I advised him to take his jacket off.  He did and seemed a bit better.  I was worried about him, but he passed me while I was waiting for Mike and the dog and I never saw him again.  Traci gave him some an electrolyte supplement and that also seemed to help.  I think that now we were in a bit of a breeze, we all felt a better.

Mike was the next to run out of water.  He and Traci brought water for the dogs but he was also giving some of his to Chula.  At the very end, he was starting to cramp up.  We met the girls at the staging area and I headed directly for the car.  I drove up about 300 yds and met them as they were coming down.  We had a very large jug of water in the car that was split between us and were were gulping it down.

The descent was about 3 hours so, yes, easier, but painful.  My last memory of this hike as guy about my age, maybe a tad older, walking by the car.  I recognized him as the guy that took my picture at the top.  He looked pretty out of it and wanted to know how much farther to the parking lot.  The poor guy was shuffling his feet over the ground... He was beyond torched. 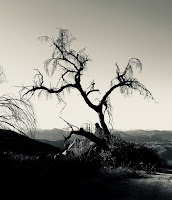 I drank water like crazy and I felt like the picture of the tree to the right.  When we got home, I got on the scale and found I lost quite a bit of weight from the trip (water I’m sure).  The hot shower felt good.  We went over to some friends and watched the Super Bowl (one of the best I’ve ever seen).  I drank water and juice continuously the entire time. I had some electrolyte supplement and I went out and bought some bananas.  I was afraid I wouldn’t be able to sleep due to cramps.  I gained 9 lbs after all the water and slept well (except having to then get rid of the water that night).

OK.  That’s it.  This mountain was a Cabron. 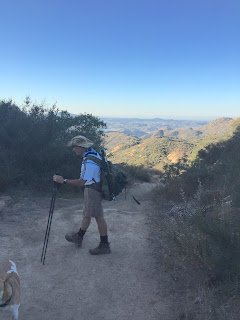 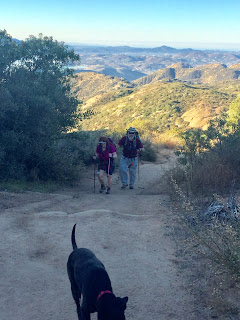 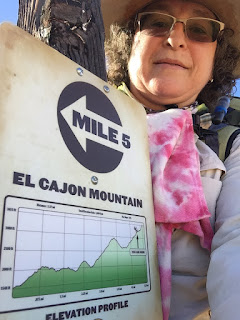 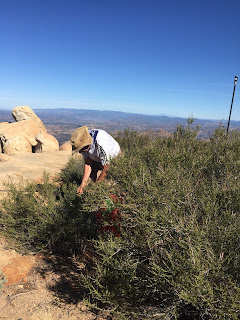