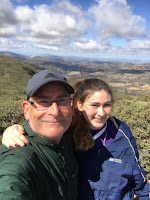 Today’s trip is a hike to Guatay Mtn to activate “W6/CC-025 - Guatay Mountain”.  I’d been looking forward to this hike as my daughter, Mari Lú, said that she would join me.  It rained quite a bit on Saturday so I was wondering if we would be hiking in snow as the bottom is at 3,500’ and the top is almost 5,000’.

We got to the trail head at about 9AM and quickly donned all the layers we brought with us.  There wasn’t any snow but it was coldddddd (to us anyway).  It was about 37F, clear skies and no wind to speak of.  After about 10 minutes on the trail, we started pulling off some of the layers we had just put on.  One thing I learned, if you are going to hike with Mari Lú, you better be in shape.  It was an effort trying to keep up with her.  She stopped a lot asking if I was OK (probably figured I keeled over with all the loud breathing).  She had an advantage though, she wasn't carrying a 40 lb pack!

The trail was enjoyable, mostly dirt where our climbing poles dug all the wayin, always a welcome feeling.  The ground was pretty moist, with mud in a few spots.  The route had a well traveled trail and was easy to follow until we came to a point where the tail forked.  What looked like a hard left up a raveen was actually the trail we wanted to be on.  Using Alltrails app made it easy and without it, we probably would have continued strait for a mile before we figured it out.

There were several 300 foot climbs to the peak and the last one was pretty steep.  Setup was a snap and after also setting up my VHF roll up j-pole antenna I was up and running.  Mari Lú made hot tea for us and I got busy getting my required contacts.  As I was setting up, I heard a Ham in San Diego who knew I would be up on the summit, she (km6NRT) was talking about contacting  me.  It wasn’t until I hooked up to the j-pole antenna that she could hear me.  I immediately had two more contacts that I knew in the area from talking to them. 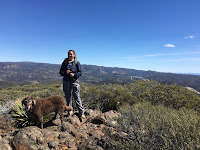 The 20 meter band was packed today because there was some sort of contest going on.  while searching for an open channel, I made a quick contact with a ham on the island of Aruba.  I he was also “contesting” because there was no chit-chat, just get a contact and move on.  I settled in on a channel that seemed to be open and picked up my usual “chasers” in the mid-west and Canada.  My final contacts were another pair of SOTA activators like me, so I did a summit-to-summit to W6/CT-103 with Kevin H. (W6RIP) and Jerry Hildeman (KG6HQD).  I watch Jerry’s Youtube channel often and have picked up a few good SOTA tips from him.  I asked him if I was going to be on video, so he turned on the camera for the contact.  I look forward to watching his next video to see how I sound.  Our summits were only about 53 miles apart.  If I was thinking strait, I would have turned on my video for the call and sent it to him. (UPDATE:  You can hear me on THIS VIDEO posted 3/12/2018).  He edited me in at the beginning of his contacts, at about 2:24.

Mari Lú had planned to go to a friend’s house for the Oscars and was itching to get going.  We hustled 2.9 miles down, and up the mountains to the car.  It reminded me of the hike up to El Cajon because right after the steep initial descent, there was a hefty climb for 200 feet up.

We still had time for me to pick up some carnitas burritos from my favorite restaurant, Veronica’s Kitchen in Descanso.