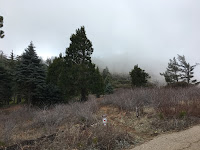 Today’s objective was a mountain over by Cuyamaca Lake in the Laguna mountains, “W6/CC-014 - Cuyamaca Peak“.  I was going to do this peak last week but I was told the trail might have a lot of snow on it so I bailed.... I got better information later and due to the warm rain, it probably didn’t.  We had more rain this week, it was a warm system, and things were damp up there but not bad.  A cold front was still moving through the area so it was a tad cold and breeze at the base.  (click on pictures for larger version). 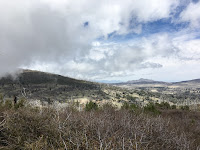 As usual I forgot my trekking poles as I set off so I had to return to get them after 2 tenths.  I figured I wouldn’t need them but you never know.  As it turned out, they came in handy as they make any incline easier, not to mention navigating one rocky area.  I decided to take the Cuyamaca Peak loop trail, counter clockwise.  The route takes the Azalea Glen Trail along a small creek, then down a fire road for a couple of tenths and then up the Conejos trail that intersects on the service road to the top.  The route was easy hiking except for a bit of a river bead like portion for a half mile but still easy, just rocky.  This is one of the few mountains in the area that as you climb higher, you actually go into the pines.  A lot of times the trail climbs out of the pines into chapperal.

As I approached the top it got colder.  The winds were kicking up pretty good.  It was fun to watch the clouds  flowing over the mountain.  Standing on the summit wasn’t too bad as the mountain was throwing the wind up and over.

I wasn’t sure where to setup and be out of the way and away from people visiting and all the other antennas up there.  There is microwave and what looks like a lot of VHF repeaters up top.  I setup the roll up MPAS antenna and  jpole.  I used the VHF radio to try to contact Bill, KM6ORF, as he pinged me earlier wondering when I would summit.  He wasn’t on but I did speak to Marianna and my pal Adam, KJ6HOT.  Adam let me know that there was a very big contest going on so the bands were packed.  He suggested that I try 10 meters.  He mentioned I might get some good DX contacts (out of country) on 10m because a few guys were trying to avoid the hordes of hams on 20 and 40. 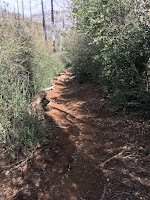 He was right, 20 m was packed but 10 was wide open.  I didn’t bring my tuner and I needed it.  I decided to try anyway and lowered the power.  I’m pretty sure the unit will reduce power when SWR is over 2.5 and it was.  I managed to land three DX contacts.  The guy from Uruguay was really booming in as were hams in Curacao and Guatemala.  The video above is of my contact with the person in Curacao.  One of the things that you might notice in the video is that there is no background hiss, static, etc.  I used the digital noise filter on the 891 and it really performed amazingly well.  As a receiver, it works better than the unit I have at home, that is three times the size. It’s not something you can leave on but when there is a station that you want to contact, it gives you some time to tune them in perfectly and try some of the filters.  When I’m calling CQ, I turn all of that off so that I can hear weak stations.  I’ll try to shoot a couple more examples next time so you can see what I mean.

Once I finished 10m I switched over to 20 and answered some of the guys that were contesting.  I did find a spot that was free (14.313) and setup a SOTA spot.  I made a few contacts but a couple of hams moved in on top and next to me with zillion watt of power.  I had more than enough contacts by this time and I was just getting chilled.  It was after 2PM and getting colder and the winds were getting stronger.  I left my jetboil in the car for weight and I wish I had it.  I couldn’t seem to warm up so I packed up as quick as I could and got under way.  I heard a guy calling CQ on the 2 meter national calling frequency (146.520) on my handheld that I monitor so I answered him.  With just the hand-held antenna mounted he was crystal clear, as was another ham that I spoke to on Twin Peaks last weekend.  One was in El Cajon and the other was near bay park.  I couldn’t see anything from the peak because we were in the clouds but it must have been a straight shot into all of San Diego. 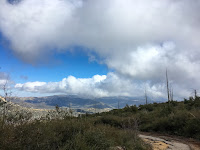 It was cold coming down the mountain.  I was definitely chilled and had all 4 layers on.  I wish I had my super-light down jacket with me... I decided to follow the service road to the bottom as designated on the loop but I was guessing it wouldn’t be nearly as scenic but faster to the bottom and easier on the knees.  I was right on all three counts.  I warmed up and as I descended out of the wind and clearer skies I was able to shed a layer and the gloves.  It was pretty drab landscape but a super easy descent into the campground.

I clocked a total of 8.3 miles.  I took a couple of wrong turns and missed one so I added a tiny bit more onto the hike but it was nice.  On the way home, I stopped at my favorite Mexican restaurant.  She had albondigas soup on special.  It was mmmmm good.

It’s time for a new pack.  When I was packing up to come down the mountain, I noticed that my waist belt was ripping away from my pack.  It held but just barely.  I don’t think these packs are designed for this much weight.  You find tons of packs like the one I have in sporting stores but I’m guessing they are for guys that are hauling just a few things, some water and a jacket.  I’ve got about 120 miles on that pack and I’ve tried to modify it to hold tight to my hips for the best load bearing but it completely fails at that.  I like it because it’s just the right size, has moly straps so I can tie stuff on, and it has just the right number of pockets and sections to keep my gear organized.  I’ve been fighting the pack pretty much every outing and now the waste strap was pooched.  Reattaching it to the pack in a way that will stay will require some redesign.

I’ve been researching packs for a while.  I really like the military style packs because of the moly loops allow me to tie gear to the outside, and all the pockets and compartments keep things organized and provide direct access.  The more mainstream backpacks don’t have that many places to strap stuff on and very few compartments which makes it a bit more difficult to stay organized.  Many have just one main compartment with possibly one or two additional.

On the way home, I went to REI to look at the Gregory Zulu.  I really, really like my Gregory Baltoro 65L model pack that I took to the Grand Canyon.  It really fits well and snugs onto my hips in a way that no other pack has.  All my life I thought backpacks were supposed to be uncomfortable, Gregory taught me a otherwise.  The Boltero is too big for this activity so my search zeroed in on a Gregory Zulu 40.  REI was having a 20% off sale and I had points that I could use so the total cost was about $60.  I’ve moved into it  and did a quick test.  I feels a heck of a lot better than my field pack.  I’ll let you know how it works out in a future post.