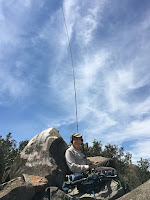 Today’s destination was W6/SC-203 - Sycuan Peak.  It’s a beautiful day and the route was a short 2 mi out and back trip but it was a pretty good incline.  Nothing super difficult, but it’s always harder when you have 35 lbs on your back.  My original plan was to hit Lyons Peak because it had not been activated yet.  This was strange since it has a service road all the way to the top.  I was guessing there might be other issues, so I setup an alternate flight plan for Sycuan Peak, where the start is about 10 minute drive from the bottom of Lyons.  I’m glad I did because the road entering the area was blocked off and had warnings in nice big letters that you need to arrange access, private road, bla bla bla.  I had sort of a late start and given it’s Easter Sunday, Jeanette wanted to serve dinner earlier than normal 8 or 9PM.  Notice the different spelling of Sycuan on the peak marker below.
(Click on picture for larger)

The hike itself is via an old washed out road.  For the most part, it was pretty pedestrian.  There is a bit of moisture in the air so I wasn’t able to see the ocean from the top but it had some nice views.  I’m inspired by some other SOTA guys that VLOG their trips, so I’m trying to shoot a little more video but forgot to get some shots of the contacts... next time. 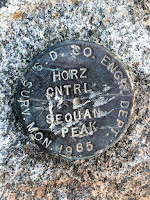 There was another hiker on the peak with me, Alicia Wilson, and she shot a little video and got a couple of nice pictures.  I gave her my card and when I get her images, I’ll update this post.

Making contacts was easy today.  My first one was VE6AO, in Calgary Alberta, Canada.  I found him while I was spinning the dial around for an open spot to put my line in the water.  He was booming in loud and clear.  He mentioned that the temperature was -8 C so I couldn’t resist telling him it was 70+ F where I was.  He was doing a bit of contesting, trying to get as many contacts in different grid squares on the planet as he could.  But like a typical Canadien, he was a nice guy, not in a hurry to get rid of you and grab the next contact like a lot of contesters.  Sure, exchanging a little more info about the weather means he won’t get as many contacts, but it probably means he’ll enjoy his a lot more.  Rushing through life sorta sucks.  Let’s stop and smell the roses once in a while people.  Besides, who wouldn’t want to talk to me.  :) 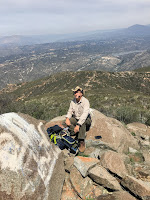 One of my last contacts was a summit-to-summit.  The ham, AE0AX was on W0C/SP-090, Crooked Top Mountain, south-west of Denver, CO.  I’ve actually worked him once before on 2/25/2018 when he was on Berrian Mountain which is in the same general area.  It’s always cool to get a summit-to-summit.  I try to look in my app for other SOTA expeditions that I can contact while I’m on the the mountain.

All in all it was a good day.  It’s definitely easier to have success from the top of a mountain.  The noise barely registered on the meter vs. my house.  At home yesterday while testing some antennas, it was S-7!  And you wonder why I don’t blog more about doing this from home?

Final note:  I’m loving my new backpack.  It fits a hell of a lot better, the load is on my hips, and it stays there.  I can cinch it in tight for difficult climbs or funky terrain or keep it a bit loose on the shoulders when I am cruising.

On my way home I had a nice visit with Sue and Gene Back in Jamul.  It’s always nice to catch up with family and I wish I could do it more often. 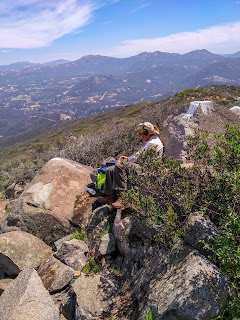 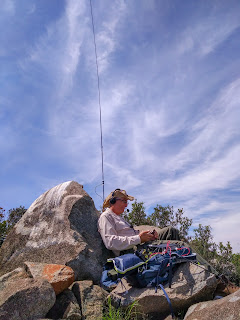