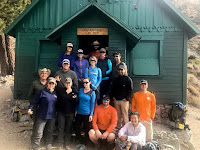 Today’s mission was another Summits On The Air, activating  W6/CT-003 - Mount San Antonio, AKA Mt. Baldy to people here in SOCAL.  I was invited to join Adam Kimmerly and his mountain rescue team at the hut for an overnight and then the rest of the way to the summit.  Adam and I launched from San Diego yesterday afternoon and hiked up the first two miles to the summit for an overnight at the Sierra Club San Antonio Ski Hut, then another 2 miles to summit at about noon today.    This trip was a real treat, as its very difficult to be hosted at the Sierra Club’s hut.  As a bonus, the crew fixed a huge dinner and breakfast.  Our full route covered over 4,000 feet of elevation gain and 10.5 miles of hiking over two days, with 8+ of it done today.  I really enjoyed hanging with the San Diego Mountain Rescue Team, a great bunch of people that dedicate a lot of their personal time to volunteer for tough training and then help other people who are lost or gotten into trouble on the mountain.  Yes, volunteer.
(click on picture for larger) 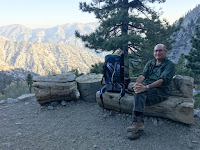 The interesting thing about this hike is that it the elevation gain to the summit via the route we took has roughly 1,000 feet of gain per mile.  That’s double the incline of last weeks summit on Tahquitz Peak.  We started the trek up to the hut in the afternoon as it started cooling off and it took less than 2 hours.

The ski hut is very well maintained.  It sleeps at least 4 down stairs and has 20 bunks up stairs.  Spring water continuously flows into the kitchen sink and it’s solar powered for lighting, with wood burning stove in the kitchen for cooking and one in the living area for warmth.  It’s the perfect get off-grid, read a book bugout.  Although it had some sort of WiFi hotspot relay on the outside it, I didn’t have cell service and was happy to not be connected. 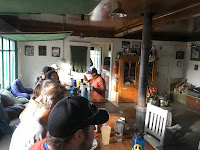 The crew cranked out a huge load of taco meat for dinner, evidently left over from a wedding, and then sat around catching up and telling stories. I don’t have all the details but Adam has been part of the crew for almost 13 years so these guys seem like his extended family. I slept on a supplied foam pad in the upper portion of the hut.  It was comfy, and much warmer than I expected.  The window on the end of the eves was open and I don’t think the temperature got below 35.  I got to try out a new sleeping bag from REI, since my other bag is really for car camping and my previous backpack bag is beyond its useful life (40+ years old).  I was more than comfy. 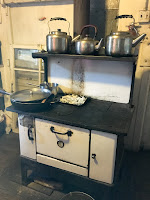 Breakfast was a massive load of eggs, bacon, and leftover meat from the night before.  Combine that with tortillas, and an excellent breakfast burrito was born.  After cleanup, most of the crew headed up to the summit.  It was a non-stop uphill grind, gaining  almost another 2,000 feet over the next two miles.  This wouldn’t be bad if we started at sea level but we started at over 8,000’, so it was just a tad more difficult.

I’m generally the last guy up as I stop for a lot of photos and I was trying out my new GoPro.  That's my excuse anyway.  We wouldn’t descend the via the same route so we had to haul everything with us, including trash.  After a while I was thinking I should have opted for the lower powered HF rig to save me 5 lbs.  Oh well, live and learn. 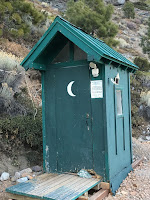 Adam probably summited ~15 minutes before me (it felt like an hour).  I heard him on 146.520 calling CQ  and he quickly got ~6 contacts on FM, cementing his activation.  He setup his mag-loop antenna and HF and was just firing it up when I arrived.  He got a couple of contacts but band conditions were a little tough for some reason.  I strapped my vertical antenna onto a sign post to save me time and was up and running in about 10 minutes. I first fired up my hand-held on 146.520 FM and netted a 6 contacts.  One of them was a German ham (W6/DL6AP) on another peak, W6/CT-012, located on Waterman, which 17 miles northwest of me.  Another one of my VHF contacts was in Oceanside, the same guy I talked to last weekend with a Yaesue digital HT.  Switching to the HF band on the FT-891, I made an additional 16 HF contacts on 14.310 SSB. 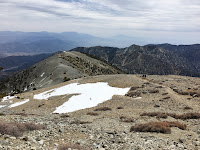 The trek off the mountain was over Devil’s backbone.  This tail takes you over a couple of ridges, some very narrow single track with a very steep drop offs and a narrow crossing between two small peaks with a steep drop off on each side.  It was a lot of fun.  I think I’m making it sound worse than it is.  It’s well traveled and although there can be accidents, mainly from people taking selfies, there aren’t many after the snow melts.  (Update: There was a hiker that fell in the area of operations and had to be air-lifted)

The trail wound down to the Mt. Baldi ski area and from that point, we followed a road down to the parking lot.  The road portion was pretty boring and my foot pads were starting to bark after 8 miles.  On the trip down, Adam hung with me and we lost track of the rest of the crew.  Turns out they stopped at the ski area bar and then took the lift down. 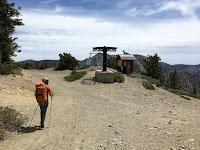 We met them at the parking lot and headed out to lunch in town.  It was an excellent adventure and I hope to do another in the future with these guys.

My attempt at a YouTube video (below) is amateur at best.  It's as time consuming as I thought it would be.  I'm still working out a style to use.  It's not nearly as good as I'd like but I think it's one of those things that you really need to drive the pre-shoot design, shooting, design lane that you want and post-processing, in order to improve.  I've been shooting stills for 40+ years and driving a digital dark room toolset for 30+, so I guess I'll have to be patient.  Feedback is welcome.  And yes, I do seem to walk funny.  It might have to do with the terrain and the fact that I have 35+ lbs on my back.