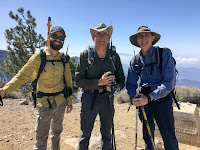 Today I joined Adam Kimmerly (K6ARK formerly known as KJ6HOT), Dennis Peck (KA6DUH), and Jeanette on an epic three peak SOTA adventure in the San Gabriel mountains along the Angel’s crest highway north of LA.  It’s a pretty area to hike in and today we’ll definitely get some miles in.  Adam charted out several options for today’s objectives, Islip, a 5 mi out and back, Mt. Williamson, about a 5.9 mile out and back, and Kratka, a 2.2 mile out and back with a bonus of Table Mountain, a drive-up with .2 out and pack if we play nice.
(Note: Click on pictures for larger rendering)

Jeanette and I were wheels up at 5AM and picked up Adam and Dennis at a park-and-ride in Escondido on the way.   We had a quick stop for McMuffins for hiking fuel and arrived in the area of operations at about 0700.  Adam navigated us to our first ingress for Mr. Islip, W6/CT-010.  Although I loaded up the route recorder I failed to press record but the charts show it as a 5 mi out and back hike.  According to the charts, it’s a 1,000 foot gain over 2.5 miles.  The initial climb up was pretty tough for about .1 or .2 but then joined a more reasonable trail.  It was a nice hike through the pines.

Once on Mt. Islip, activating was pretty easy.  Being so close to the LA area, you can easily get four contacts via VHF, with handi-talkies (HT).  Being the real geeks that we are, we setup our HF rigs to see what we could accomplish on HF.  I setup my usual vertical antenna, Adam broke out his custom magnet loop, and Dennis was using a super lightweight end-fed 20M setup.  Given the proximity we weren’t going to be able to simultaneously use our radios, even if we were on separate bands so we decided to share a channel.  Once Adam got a contact after calling CQ, we would each get a turn to communicate and log a QSO with our radios.  At the end, I turned the power up to see how far I could reach.  We had a couple summit-to-summit contacts, a few midwest contacts and we also ended up on the NASA log as there was a special event going on today.  One of the summit-to-summit contacts was near us using an HT and it was his first SOTA activation and I’m glad we could be part of it.  Adam is going to send him a card with our picture on it.  [ As a side note, before the days of email, hams use to send “QSO cards” as a another way of saying hello. ] After getting a few pictures, we headed out.  Near the top, I slipped a tad and almost did a faceplant.  Thankfully, trekking poles saved the day.  Next up was Williamson, W6/CT-247. 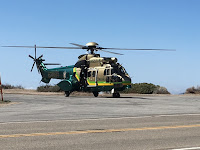 It was a quick drive up to the parking lot for the hike up Mt. Williamson.  As we approached the lot, we noticed that a hiker was being loaded onto a backboard.  He had somehow fallen off a cliff on the trail was just above the road.  The tail leaves the road up a steep incline.  After the fall, he evidently had a momentary loss of consciousness and was pretty banged up.  One of the hikers near by ran got her SPOT satellite signalling device and called for help.  A Sheriff mountain rescue helicopter was standing by just across from the lot to evacuate the patient.  It’s hard to tell how far he fell before contacting the ground and sliding down.  If he was at the top, it was easily a 25’+ drop into gravel the size of a double fist.  Hopefully he has a full recovery.  Once the hiker was evacuated, we headed out.

The trail up Williamson was nice, nothing too difficult, a 1,600’ gain over 2.8 miles.  I noticed I was being a bit more careful on the trail.  I didn’t want to end up as the next evacuee.  A lot of the trails in the area are narrow with pretty steep drop offs or are cut along a ridge.  It’s nothing too scary but you do need to be mindful.  Also, it’s a good idea to keep your trekking poles lashed to your hands, else you could drop one off the side, and without ropes, a rescue of the wayward pole would NOT be advised as most of the terrain on these hillsides are loose dirt and rock. The last .3 miles were a bit difficult because: a) I thought I was done when I hit the false summit, and b) it was a bit rocky, up-down terrain to get through. (Here is the map of our trek up.) 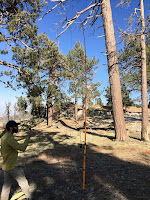 There was a lot more room to setup in the activation zone for this mountain.  VHF contacts made it easy to get an activation again which is nice because the band conditions seemed crummy.  Adam was on 20 for a while before he turned the frequency over to me.  I had a bit easier time grabbing some HF contacts, probably because I was running 30 watts instead of 5, so I quickly created a pileup. Dennis eked out a few on 20M when I was done and Jeanette relaxed with some cheese and cracker and an e-book.

Jeanette headed down first and the rest of us quickly followed.  Adam’s friend Tim was summiting twin-peaks not far from us after we left the activation zone.  We helped him get the required four contacts but he ended up creating a pileup on 146.520. It was about 3:30 when we headed down the mountain I think. 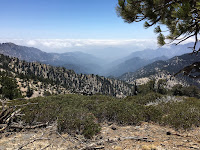 Once at the card, Dennis went on the DL due to a blister on his foot, and Jeanette had fulfilled her primary mission today, declaring her new backpack combat ready, so they were going to sit out the next summit.  Given the time of day we decided to just head to Table Mountain, W6/CT-067, which is what is known as a “drive up”.  The activation zone is only about 0.1 from the parking lot so it would be an easy one.  Although Adam had already gotten his points for this one (you can only activate a peak once per year), he headed up with me to play with his VHF amp, a tiny backpack ready unit that hooks to his HT.  The walk up, setup, activation making 10 contacts, breakdown and walk back to the car took 45 minutes.  Next stop, Bergers and Brew in Pine, CA.

We enjoyed dinner that included some bergers, brew, and pizza.  We ran into the girl that called EMS for the downed hiker and had an interesting discussion with some backpackers from germany and New Zealand.  The guy from New Zealand had been on the trek that Jeanette is planning on this summer so they both enjoyed exchanging info.

Update: You can find K6ARK video here.  It's excellent!