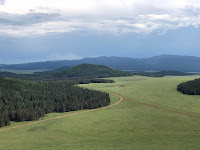 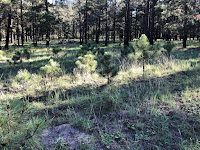 As I alluded to earlier, yesterday was a complete bust.  I planned on doing the first two summits in the above list but when I summited Escudilla Butte and setup, I had radio problems.  I thought that it might be the battery because it was acting like it wasn’t charged, or it could be heat.  I had left the radio in the sun while setting up the antenna and after just a little use, the over-heat kicked in and shut the radio down.  At the time I wasn’t sure what the problems was (I thought it was the battery), we packed up and I had to cancel for the day because we were heading into Springerville.  Once I got home, the battery was already charged and the radio worked fine.  So I decided to double down on the peaks today.

We set out at 0630 this morning and I packed an extra LiFePO battery just in case.  What’s an extra pound or two in the pack :).  Since we had just been out there, we knew the route to the ingress point, parked, and headed out.  The hike up from where we parked the car is .8 miles but it’s pretty good climb all the way to the top.  I really enjoyed walking over the spongy earth covered in pine needles.  It was a lot cooler today as well.  When we hiked up yesterday, we didn’t get started till after 10 and it was a hot climb. 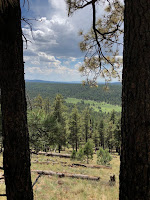 I setup exactly at the same place as yesterday, but was careful to keep everything in the shade.  Also, I pulled the front face plate off to ensure that the fans could get a good air flow through the unit.  I backed it down to 85 watts and it ran fine.

Since I didn’t have cell service or APRS I first tried to contact someone on the Greens peak repeater, which is networked all the way down to Phoenix.  My hope was that I could find someone to place a spot for me.  I guess it was too early, 0730 local time, as I wasn’t able to contact anyone.  I did a little calling for CQ to see if I could raise someone on HF with no luck.  I then tuned around and found a conversation going on.  I was able to make contact with the net control for a group in Oklahoma and asked him to spot me on sotawatch.org.  My “spot” was placed somewhere else but I it did get me some traffic.  One of my contacts did place a SOTA spot for me and I quickly created a pileup.  Once I had given all of the chasers a chance to get points, we exfilled out of the area.  One down, three to go.

There was an area right near us that Jeanette wanted to check out and do a little rock hounding.  We drove over and Jeanette and I searched the area.  Jeanette found where people had been digging and did take home a few rocks but she wasn’t impressed.

Once the rock hounding was complete, we headed out to Coyote Hills, near springerville.  I decided to head back to Alpine and then drive around to Springerville.  We could have gone strait around Escudilla and possibly saved some time but they are putting some new gravel on the road in that direction and we ran into them yesterday, where we had to wait a while behind the dump trucks.  It was mega dusty and given the time of day, they were in full swing. In addition, the drive back to Alpine presents a bit of a different view so that was actually a bonus. 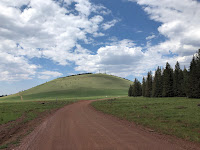 We arrived at Coyote Hills at about 9:30 and it was hot.  The road was very rough jeep trail.  This is high desert at about 7,500 feet and scabby plain.  We summited after parking and a quick hike, with Sulu the SOTA dog going from shade to shade.  She was not a happy camper.  I started setting up and Jeanette decided to take her book to the car given there was nothing but low scrub for shade at the summit (which Sulu found).

Now that I had cell service, I was able to spot myself using an app and contacts came in quickly.  I gave all the chasers a chance to pick up some points and then bugged out of there as quickly as I could. 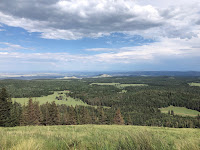 We thought about stopping for lunch but decided to just push on for Greens Peak, which is close to 11,000 feet.  I expected it to be cool (and it was) and it looks like you can drive all the way up.  It was a pretty drive up and the views were fantastic.  I setup next to the car, still using my pack battery.  I self-spotted and was up and running making contacts from Texas, Oregon and to the east coast.

Last up is Antelope Mountain.  This was going to go down as a bit of an adventure.  It’s just down the highway back toward Springerville and I thought it would be an easy double with Greens.  The road from the highway to the summit was a real bugger.  I drive a Highlander with all-wheel-drive but it’s not a locked in four-wheel-drive like a 4Runner and it doesn’t have a truck suspension, and the road clearance is just 7.3 inches to the 4Runner’s 9.6.  The last section of road was very, very steep.  I had the AWD button in (not sure what that does since it’s supposedly all-wheel-drive all the time.  I was actually impressed with the traction performance  I was getting slip out of the front and rear tires.  The road had very deep cinder gravel and other volcanic material.  I got to a point where the size of the rocks was just too big and I didn’t want to chance having a flat so I shut it down.  Also, the last section looked like I could possibly high-center, which would have been a bitch getting off of or tearing up the underside of the car. 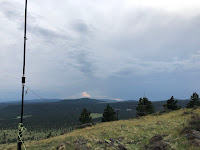 I loaded up and set off to complete the last activation of the day while Jeanette walked back to look for places to turn around.  Sulu wasn’t moving and I didn’t want her to cut her feet up going up this terrain.

Once I summited and started setting up, I noticed that the connector between one of my antenna segments was jammed down into the pole.  I have a multi-tool on my pack so I had to spend some time trying to pull it out.  I had the same problem on the first summit but it came out easier.  Not this time.... That problem fixed, I moved onto coming up with a solution to keep the counterpoise wire off the ground (I think it performs better that way).  Once that was solved it was on to erecting the antenna in high wind.  There was a metal pole that I lashed onto and I then fired up the radio.  I was up and running.  For some reason, I couldn’t spot myself with my phone but I did raise someone on VHF via the Greens peak repeater who offered to spot for me.  I was tired and it was nice to have contacts start rolling in.  A lot of the hams were following me all day so many of them were familiar.  I got two husband and wife teams, the Burns and the Auchards which quickly allowed me to legally active the summit.  I got a few more for insurance and packed it in.  There was just one more task, backing the car down a very steep slope to some point where I could turn around.

I made it back to the car without wiping out.  Jeanette found a spot that might work and I popped the back window open so I could see out (there was a lot of dirt on the window from the day’s travels).  I love the backup camera and large screen on my SUV.  It allowed me to not have to have to crane my neck back to see where I was going. With the guidelines and center marker it was easy to keep the Highlander on the road and not go over the side.  The initial place Jeanette picked out wasn’t big enough.  We went about another 100 yds and found a spot that would work.  With about a 6 point turn we were turned around.  Now it was just surviving the rough road to the highway.

Ohhhh, how sweet the pavement felt!!!  We weren’t far from Springerville and we were both very hungry since the only thing we’ve had to eat since the light breakfast was jerky.  I was hankering for some chili rellenos at Booga Reds.  We dropped Sulu off, picked up in-laws and headed to dinner.  These were probably the best chili rellenos I’ve ever had!  The green chili was from Hatch, New Mexico, and the sauce was fantastic.  Oh, I was satisfied.  We played all day today in the mountains and... I’m ready for bed.

Tomorrow, possible Middle Mountain and then we will see.