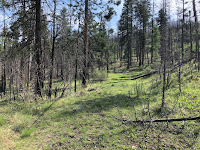 Today’s objectives was W7A/GR-002 - Middle Mountain, and W7A/AP-015 - Timber Top.  I had a big breakfast and got on the road at about 7:30.  According to my research, I could get within a mile of the summit.  The drive over was pretty and I spotted a mama dear with two babies.  The fawn were about the size of a medium dog and were trotting behind the mama, who was bounding along over logs like it was nothing.  The poor little guys were struggling to get over small fallen logs.
Note: I spent time shooting video this trip so you will have to watch that if you want more imagery.  ... But there is one surprise image below. You can always click for larger. 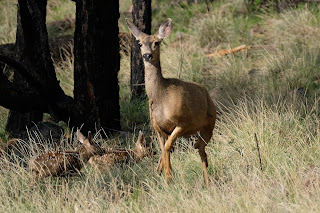 If you look at my chart (here), the plan was to go up to a semi saddle and then to the top.  The area was very overgrown and some areas were covered with bushes with tiny thorns.  The track recording of my trip followed pretty much the path on my charted plan.  I was able to use an overgrown jeep trail and then some natural drainage and animal trails.  The summit was surrounded by oak so it took a few minutes to figure a way through.

Setup was easy today.I didn’t have data service on my phone (I had data turned off Wireless data when I was at the cabin and forgot about it,  darn it) and I tried calling CQ on 14.328 (337 was in use).  I wanted to knock this peak off the list so I could get over to Timber Top before the rain came so I called another ham and asked if he wouldn’t mind spotting me.  He did and a few minutes later I had “chasers” calling me.  Thanks to Kevin, K7ZS for the spot. I was off the air for a few minutes while I re-oriented the radio so there was good airflow.  It had shut down like a couple of days ago so a quick change for air flow and I was up and running.

I logged 16 contacts and then quickly packed up to get to the next peak.  As you can see from my track recording, I took a more direct way back down but I picked up the wrong jeep trail for just a bit.  The trail was very overgrown and had a lot of fallen trees on it.  Going over the fallen trees was difficult for the entire route since I not only have to heft myself over the logs, but the additional 32 lbs on my back.  I felt a little beaten up when I got back to the car after crashing through the brush and spilling a little blood.  The hike was pretty vertical and the descent was almost as much work as the ascent.  Next stop, Timber Top.

The trip back to the highway was longer than I expected but the road was in good shape.  After reaching the ingress point for the hike up to Timber Top I noticed  clouds were moving in up off the rim and some large thunderstorms were building.  I was hoping to summit, make contacts and then get back down before they got too close...  I loaded up and headed off but didn’t make it more than a 100 yards before lightning blasted across the sky and light rain started.  I figured it best to head back to the car since putting up a vertical metal antenna in a lightning storm has “bad idea” written all over it.  Just after I got in the car, the sky opened up with hail, rain, and more lightning.  It didn’t look like something I could wait out so I headed into Alpine for lunch at the Bear Wallow.  If it cleared after lunch I would re-attempt it.

Lunch was peaceful, and relaxing.  The weather didn’t clear so I decided to retreat back to the cabin, showered, and took a nap.  I love a nap when it’s raining with a little thunder.  It’s been a busy week so the rest was welcome.

I’ll reattempt Timber Top tomorrow morning.  It was nice to dial it back a tad and relax at the cabin.