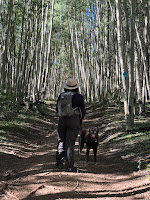 Well, I’m back in the white mountains of Arizona and doing a little more Summits On The Air.  Jeanette and I took off early today from the cabin to hike W7A/AP-003 - Pole Knol. We forgot the coffee and since we got in late last night we couldn’t pick up any. We decided to head into the village to have breakfast at Bear Wallow Cafe.  The eggs and fix’ns were awesome.  Fully tanked up, we headed out to the Pole Knol recreation area, on the other side of Springerville, just past the Greer turnoff.  It was a cool morning requiring a fleese but not bad.
(Note: Click on pictures for larger)

It’s been raining up here off and on for a couple of months so the country is green green green.  After arriving at the parking area for the Pole Knol Recreation Area we set out.  The trails were well marked with blue triangle tags on trees.  In the summer, markers aren’t really needed since a lot of the trail is road or very well maintained trails.  There’s a lot of winter recreation in this area so the taggs are really for the cross country skiers and snow shoe hikers that can’t see the trails or roads.

It was an easy trek up the road.  We met a lady who lived in Eager and is a 5th grade school teacher in Eager and her husband works for the forest service.  After a nice visit, we started the last 25% of the hike.  I had mapped a route that took us up a small rail and then required a break off the trail to the summit, 0.25 miles up.  We took a little different path, following natural game trails to the summit using a compassionate bushwhack style, don’t step on any saplings and disturb the mountain as little as possible.  I mapped out two routes, and we took the purple route as you can see HERE.  We descended off the south-east side and I recommend that for the ascent, as it was quite a bit easier.

WOW!  What a view.  The approach from the south-east would have been a little easier but the reveal as we came out of the trees to the view was one hell of a reward.  The primary objective to activate this mountain was just a matter of setting up the radio, spotting myself, and talking with a lot of great hams.  Setup was easy and I had a pretty good pileup right away.  I had four summit-to-summit contacts today (that is, guys like me on another summit).  With a total of 20 contacts made I wrapped it up.  As I was shutting down, someone in CA asked me on DMR (via a repeater) if I was going to use 40m.  Hmmm.  I should have done that to get a few contacts that were more local and just to try to band out.

Jeanette and Sulu found some nice shade and Jeanette was reading a book on her phone.  She had the same fabolous view that I had and looked quite comfy. 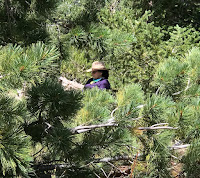 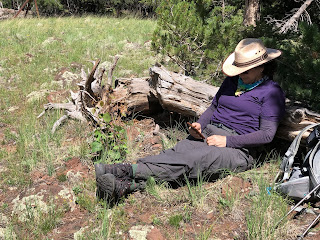 Today I was trying out two new pieces of equipment,  my De Lorme Inreach, a satelite tracker with messaging capability, and a DMR radio that I won.  Other than using the Inreach as a SOS device, it can send SMS and email messages.  More importantly, it can help me self-spot when I don’t have cell or APRS by sending a message to the spotting site via satellite.    It’s taken a while to setup the Inreach to support spotting.  I worked with the ham that manages the spotting via SMS but we did get it setup and tested before I left San Diego.  I did notice that the posts were delayed by 30 to 60 minutes.  I told him I’d do some testing this weekend.    The last thing I wanted to test was tracking using the Inreach.  I wanted to be able to let Jeanette and others know where to find my dead body when necessary so I wanted to see if I tossed the Delorme in the top of my pack if it would ping my location.  I turned it on at the top of the mountain and off at the car.  It tracked me via GPS, and sent my location via Iridium satellites to a web page.  It worked like a charm.  If you are interested in tracking me in the future, you might see me at http://share.garmin.com/claborne/.  It sends a ping about every 10 minutes which is pretty good resolution but not nearly as good as the one on AllTrails.  You can see the comparison below.  The Inreach is plenty good enough if I need to get help a route tracking HERE.  My charting and tracking app, Alltrails, is used to show my actual track against a very fine-grained plan.   Each tool does exactly what it needs to do.

The second piece of equipment to test was a DMR HT, the AnyTone AT-868-UV.  I won this “Digital Mobile Radio” in a raffle a couple of weeks ago from the Papa Group, and will probably be writing a post just on this radio, and more importantly, DMR (Digital Mobile Radio).  This is a much better radio than I was anticipating.  The market has a few very cheap Chinese radios like the BaoFeng UV-5R, a very popular cheap but disposable radio known for overheating, being difficult to program and of general low quality.  The Anytone radio is different however.  It’s sturdy, easy to program and very flexible.  I actually like the user interface for programming (via PC) and for using the radio better than my more expensive Yaesu HT units and .... it supports DMR. 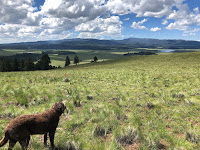 The radio acts just like my analog radios but it also supports a new and growing digital standard, DMR.  I was actually thinking of trying out digital using a D-STAR radio that is a competing digital standard, but they seem a bit expensive.  After getting the DMR radio for almost nothing ($20 in raffle tickets), I’ve researched the heck out of it and talked to a few hams about DRM (small sample size BTW).  I think DMR may be the wave of the future, especially for hams located in a city.  One of the hams I’ve spoken to has used both and he feels that DMR is growing faster and it’s easier to use.  A BLOG post from another ham that has both feels that you really need to look at the support for the standard that is used in your area of operations and then pick.  For now, I agree but I feel like DMR may go on to dominate.  I have Yaesu radios that support a proprietary digital standard but it’s really not the same as the other two (I’ll spare you the technobabble) and I don’t see it surviving long-term.

In short, DMR radios allows a ham to dynamically connect to a “talk group” with users from all parts of the world by just connecting to a local DMR repeater (Brandmeiseter in my case).  It depends on having a repeater or “hot-spot” in your home near by and the repeater needs a solid connection to the internet so that it can become part of the overall net of Brandmeister echosystem.  If the internet is down, then it’s back to analog because it will be useless other than acting as a stand-alone repeater.

I’ve met a few hams and have some pals that use DMR in San Diego.  They monitor the “SoCal” group, so I really wanted to test how this works while traveling and see what the benefits are to using it for SOTA.  I figured I could connect to a Brandmeister DMR repeater in Show Low, AZ from the mountain I was on, and talk to some people I know.  Sure enough, it worked no problem.  One of the hams I spoke to jumped on his HF when he heard I would be activating a 10 point mountain.  It makes me wonder if in the future, there will be a SOTA “talk-group” for hams that want to chase and be chased.

Because the DMRradio does both analog and digital, it may be a really good radio to carry for SOTA.  I rely on my battle tested Yaesu 2DR right now because it has a special mode called APRS but I could see myself switching to the AnyTone once I figure out how to use APRS on it, or when they come out with a radio that has better support for this.  I’m going to continue to test and I’ll let you know.

By the way, there are some really cool analog repeaters that are setup in a network so that talking on one causes your signal to come out on all of them.  To name a few that I’ve used,  Papa System in southern California,  EAARS, and the Arizona RimLink.  While at my Cabin and doing SOTA on all the mountains around here, I’m always able to hit either Alpine or Greens Peak repeater, putting me into the EAARS network which allows me to contact hams from my area, into Silver City New Mexico, Sierra Vista Arizona, and Tucson.  Rimlink allows me to go all the way past Phoenix.  The analog repeater networks can use internet for a “backhaul” but many of them use radios to link them, isolating them from a internet blackout if you’re into prepping.  Although these analog networks aren’t nearly as big and flexible as DMR, they can be more reliable and just as useful to SOTA operators like me and others.  I’ve used it to reach a ham in Phoenix to get a quick spot on the SOTA watch network so I could complete my mission before the sun went down.

All of this stuff is free and is maintained by volunteers.  I’ll be joining some of the clubs that run these repeaters to helped support the hard costs of operating the repeaters and associated network interlinks (I”m already a Papa member). 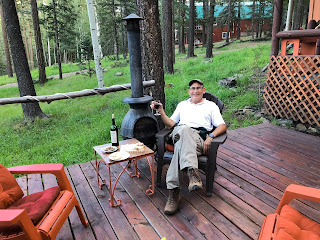 All of my objectives were met today except for my ability to use satellite to  spot myself.  I’ve reached out to the HAM that helps configure this and I hope to have a successful test on my next SOTA activation.  (UPDATE:  He wrote me back and it turns out I screwed up the message so it was rejected.  Chalk that up to user-error.)

For the trek back to the car, we decided to take a little different path.  It was easier and more scenic.  I love being in the forest where the ground is spongy and the weather is cool.

Tonight, I had a well deserved glass (ok, a few glasses of vino with my neighbors on their deck).