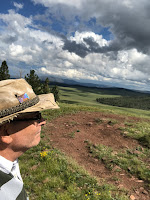 I woke at 4AM this morning to bright strobes and clashes of thunder.  No, I didn’t passed out in a hip nightclub (that would be a good story though), it was one heck of a crashing a thunderstorm complete with rain and hail.  I saw that the forecast predicted an early rain but this was ridiculous.  My bedroom is upstairs and I’m just under a metal roof on wood.  I love the sound of rain coming down.  I could tell at times there was hail by the sound of it bouncing off the metal roof  The windows were open so the show was in 3D.  Another wave of thunderstorm came through at 5AM and it rained off and on till about 8AM.  When I got up, I was chilled so I so I started a fire in the wood stove.  I had planned on an earlier start today but the forecast was for it to dry up a bit later so I waited till noon to launch.  Sulu and I loaded up and were were off.
(Note: You can click on a picture for a larger version)
(Second NOTE:  I remembered my GoPro today so I’ll upload the video when I get home) 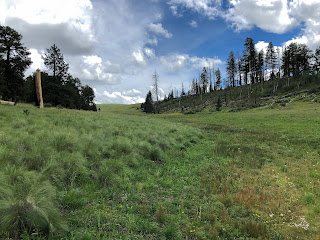 Wahl Knoll is right between Springerville and Big Lake.  A link to the chart is here, showing a couple different ways that I was thinking of getting to the summit.  I drove up the forrest road by Big Lake and then over to the turnoff to the AO.  I was looking forward to the trip since it is in the same general area as yesterday and I knew it would be green and beautiful.  It was mostly cloudy with a light breeze when we started out.  When I left the house, I had heard that it was raining in Concho, about 50 miles north of the planned area of operation.  I just hoped it would stay north.

I pulled off the road and put on the pack.  Like yesterday, it felt good to put the pack back on.  The hike started out up a valley and then up the hill.  In comparison to some of my other hikes, this was pretty easy.  The grass was up almost to my knees in some areas and the hike up was like a dream.  There was actually a road that paralleled my path for a bit.  I thought about taking it but with the three day weekend, there were a lot of recreation vehicles using it.  It looked like the road took a little easier path up but it couldn’t be that much easier than what I was looking at.  It’s funny how things always look smaller, less steep, and closer than they really are.  :)

The terrain up was at a good incline but  not that bad.  I did wish I was a little more acclimated to the altitude though, the summit was at 9,768 MSL.  One of the things I was hoping for was to be on the summit about the same time as my friend Adam, W6ARK was on his summit.  Adam is in the Sierras climbing stuff that makes my hike look like an ant hill and he’s roughing it where I had a hangover from fine wine and steak the night before.  I was barely getting cell service and about 100 yds from the summit my watch buzzed, letting me know that Adam was spotted on one of his summits.  I cranked off a text to him that I would be setup in 15 minutes and give him a call on the radio hoping he got it. 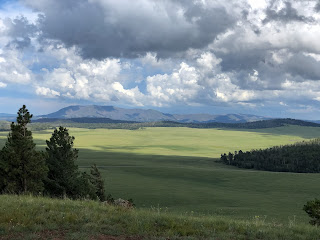 As soon as I was setup, I started trying to hail Adam on 14.326 MHz.  I couldn’t hear him but I think he could possibly hear me.  I was running 85 watts and he was running 5, trying to keep the wait down for a multi-day SOTA expedition.  I heard some familiar call signs talking to him so I asked if they would pass on my best wishes for his trek, which they did.

Cell service sucked where I was at and I had to stand in just the right place or network wouldn’t work, and it usually didn’t.  This is the perfect time to break out the Delorme Inreach and try to spot myself.  It didn’t work yesterday but that was due to “user error”.  I malformed the data to be transmitted and the remote sota watch SMS processor correctly trashed my message.  Today, I’d try to get it right.  My phone talks to the unit via bluetooth so it makes it MUCH easier to get a message off.  I have an alert on myself so I can tell when my spots go out if I can just get a tiny bit of data.  The message went out faster than usual to the Iridium satellite and less than a minute after the Delorme pinged that the message was sent, my watch buzzed, letting me know my spot was posted on sotawatch.org/spots.php.  As I was trying to get back to the radio, I could hear people calling me... wow, it works fast.  Satellite to sotawatch.com?  Check! 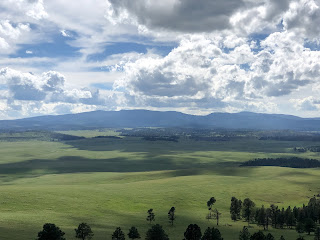 I quickly had a pileup going and worked about 10 or so contacts, including the reliable husband and wife team, Gary and Martha Auchard in Kansas (W0MNA and W0ERI).  When I was done I decided to try 40 meter and tuned up 7.275 MHz.  Just as I was about to get started, I got a text from Adam asking if I was going to try 40.  We quickly hooked up on the radio, getting us both a summit to summit contact.  The band was up and down and the popping of the lightning to the north of me made our QSO difficult.  I wished him well, made a couple more contacts and then packed up. I tried to meditate but there was just too much activity down in the camp at the bottom of the hill and the motor the bike climbing the hill to my position behind me made it a tad difficult to enjoy the peace that was there, somewhere.

The last thing I did was try to use the Porter Mountain repeater with my DMR radio and access the SoCal talk group.  I could still get into the repeater and was told I was coming in loud and clear in California using my handheld.  Test two complete.

All of my experiments worked today and I used 2, 20, 40 meter bands, and a satellite on this expedition.  Aside from all of the geeking out, the sightseeing was beyond anything I’ve had up in this area before.  I followed the road a bit closer on the way down just to see where it went.  The exfil out of the area was easy and the drive home was just as spectacular as on the way in.  You can see my hike track HERE.