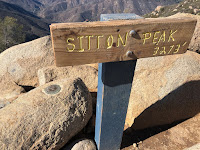 Today’ objective was to be a quick hike up to Los Pinos Peak, Trabuco Peak, Santiago Peak, and then possibly Modjeska Peak.  I figured I could get at-least two.  The hikes from the road were pretty short so I could have done all 4 if I didn’t run out of daylight.  Unfortunately, the recent fires had other plans.  There was a gate on the road into the area of planned operations that was CLOSED and locked.  The road had some damage and they were trying to figure out what to do with some of the burn area I guess.  That left me with a 10 mile out and back just to Los Pinos.  Trying to make any more than that up that road was out of the question for me.
(Click on pictures for larger) 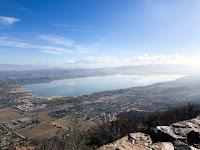 My plan was, and still is to see if there is another entry point into the area, say Silverado Canyon road,  or if there is a chance they will open it before the end of the year.  If I can get into the area, I can knock out a few peaks in one day.  That left me with my plan “B”, hike Sitton Peak (W6/CT-172 - Sitton Peak),  and possibly another two miles out and back that is designated “W6/CT-268 - Elsinore Mountains (HP)”.   I was actually thinking of doing these next week and invite some friends to go along.  I figured I could do both peaks because I thought Sitton was only a 6 mile out and back.  Turns out I was wrong, my chart actually showed 4.74 each way which was just about spot on (my track HERE shows 9.6 total).  I could have probably done the second one today but after hiking 10 miles I decided to just head home and save it for another day.  (I added a few of tenths on for having to go back to my car for the trekking poles... I’m lashing those onto the pack next time). 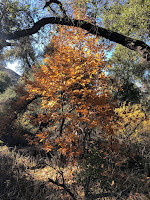 I got a late start this morning as I hadn’t completed all the steps that I normally do for planning and I stayed up way too late, making me a bit slow.  I made some coffee and got the coordinates of the starting points for the various hikes and then loaded up.

The drive up to the Lake Elsinore area was trouble free and I’d been to this area before with friends.  As I mentioned, not too far up the road I found the gate was closed and locked (I charted it on the map HERE).  Heading down the 74 to the trailhead for Sitton was a curvy shot down the 74, about 10 minutes to the parking lot.

A couple of tenths in I realized I had forgotten my trekking poles.  The hike was easy so far, so it didn’t take that long to go back and get them.  The hike up was a fairly gentle climb on an excellent trail so the poles weren’t really needed for 95% of the hike.  The trail was lined with oak and the usual shapperal for the area but it was pleasant.  The summit trail was a lot steeper for about .3 miles and it reminded me at times of the short climb of about 45 deg up for Sheep Head Mountain. 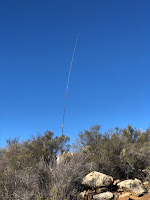 The radio and antenna setup was easy once I was able to pull one of the poll connectors that had gotten jammed into the last section of antenna.  I lost my multi-tool last week so I’m really glad I got a replacement for this trip.  The connector extraction would have been impossible without it.

The sky was clear but hazy out to the ocean.  The weather was cool, probably in the low 60s, and it had just rained so the trail was damp.  Take a look at the pictures closely where the lake is in the foreground and you’ll see snow on the distant mountains.  As I was unpacking, I got a call on my HT..  It turns out that Mark Grow (KG6LI) had seen the SOTA Alert that I had posted from the parking lot and was tracking my progress from my Delorme Inreach at share.garmin.com/claborne.  I put the URL in my spot so that chasers didn’t have to rely on my wild ass guess of when I would summit.  Mark lives in the area and I had also posted that I would be monitoring 146.520 so he gave me a shout out when I summited.  I’ve made some awesome friends in this hobby and Mark’s one of them.  He went into my logbook and had the honor for first contact on this trip (it’s always an honor to get a QSO with me). 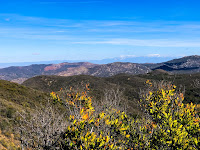 I had a good pileup going once my SOTA Spot went out.  I had a quick chat with Gary (W0MNA) and then Martha (W0ERI) who just recently passed 100,000 chaser points.  In total I worked 12 stations on 20 meter and 3 on 40 meter.  Lastly I thought I’d dial in 17 meters as my SOTA Yoda, Adam (K6ARK) had trained me.  It turns out that 17 was open and I easily had a quick QSO with a guy in the Puntarenas Province, Costa Rica, approximately 2600 miles from me who’s signal was really booming in. My last contact on 17 was an operator on Vancouver Island, Canada. There was a guy from Surinam booming in but everytime he was ready for a new contact, I got out-shouted by 20 other hams so I gave up after a very long time.  All in all it was a good RF day and a nice hike in.

The hike out was enjoyable and when I finally reached the car I decided to skip the other peak. 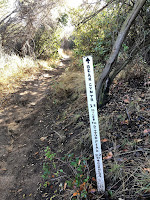 When I think back to last weeks hike, this one had a longer distance but easier.  Last week’s route up to the summit trail (false in this case) was a hard packed road whereas today’s treak was a sandy dirt trail, a lot more enjoyable.  Last weeks turn to ingress onto the summit was a horrible bastard of a bushwhack when I ended up at a dead end on the trail, whereas this week’s trek was a well cut trail trail all the way to the summit.  The very steep part had some drainage in the middle of it, almost providing steps in places so it was much easier than normal..

I look forward to doing this one again next year.  It’s a bit far to go for just 2 points, and I should have done the other peak which was about a 2 mile out and back according to my charts.  But I keep telling myself, I’m not in it for the points... LOL 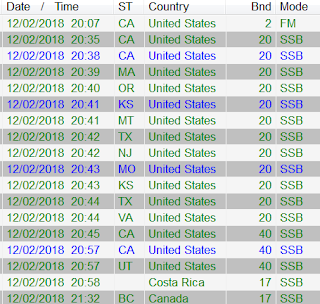