I needed a hike to bookmark the end of the Thanksgiving weekend.  Due to events beyond my control, we went to Phoenix instead of Springerville for Thanksgiving.  We had a very nice time with the in-laws and it involved the normal visiting and excellent meal.  It was a short trip and all of this meant that I wasn’t able to do some of the hiking that Juan and I had planned up in the White Mountains.  So today, I got my butt up early and headed over to Middle Peak, W6/SC-024 - Middle Peak.  It’s located up off of the Sunrise highway past Descanso just south of Lake Cuyamaca.  I hadn’t ever done this before but have looked at it from Eagle peak.
(Click on photo for larger version) 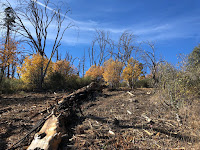 The fall colors of the oaks were in full force, a very nice treat on the way up, and I spotted a deer just before the IAF.  I had charted out a path up the south side, mainly because of the incline.  I figured I would be able to find a trail but also knew that some bushwhacking might be in the plan.  Once on the road and near the place where I would need to leave the main trail I saw a trail going up the slope.  Perfect!!!... or so I thought.  I hit a dead end and had to resort to bushwhacking my way up.  The foliage was thick as hell.  I did find some natural paths and made sure to preserve new growth, especially the pine trees that had been planted in the area.  I reached an area near the summit that was probably close enough to count for the activation.  In order to get over to the main summit, it would have been a major bushwhack and taken at-least another 15 to 30 minutes.  I was running out of time because I needed to activate this baby and get back to San Diego for a birthday lunch/dinner.

I quickly setup and just about the time I was going spot myself, I got a call on my HT from Adam, K6ARK.  He saw my “SOTA Alert” and knew I would be summit today and he wanted to check on my progress.  He asked if I had taken the Northern rout, and the trail where the three cairns were.... What?  I wasn’t aware of this!  Crap!  I was going to ping him last night ask ask what the best approach was and forgot.  Now I find that my route could have been a lot easier.  Oh well, I plan to do this again in January or February so I’ll try it then, hopefully with Adam.

Setup was fairly easy and I was up and running in about 10 minutes.  One of my regular contacts, Gary (W0MNA) and Martha (W0ERA) in Oklahoma were crashing in so loud I had to turn the gain down on the radio.  I pulled in 19 contacts on 20m this trip.  I didn’t really have time to setup on 40m but I did try 15m per Adam’s suggestion.  He mentioned that the band was open and that I might be able to get some good DX to the south.  I did try but no joy.  I had to get packing as my time on the hill was already expired.

My exfil was a bit easier since going down hill always allows a better tactical view, enabling me to find more natural or man made paths.  It wasn’t without some pain in the ass bushwhacking but it was a lot faster. I'm glad I didn't need my multi-tool from Gerber as I noticed that I lost it on the way up.

After 6.4 miles and some difficult hiking at the top I was glad to be back at the car.  I look forward to coming back up here and trying the approach from the north side. 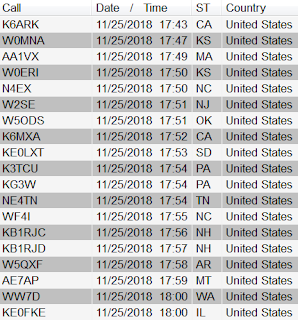