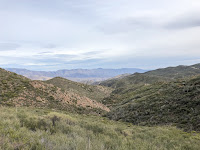 Today’s hike takes me out north north of Julian into the rugged hills just over the Riverside county line to Combs Peak (W6/SD-011 - Combs Peak).  This peak is right off of the Pacific Crest Trail (PCT) and has a well used trail that breaks from the PCT and heads to the peak.   The trail head that I used is at the intersection where the PCT crosses Lost Valley Road.    Google will try to get you to the IAF (33.38157, -116.59513) via private property.  I’ve marked the road with a waypoint and a small purple line so that you don’t miss the turn.  Stay to the right when you get off the highway.  It’s a pretty rough road but clear of big rocks and a small truck should do fine, my Highlander loved it.
It’s easy to pass the PCT trail crossing but there is a marker and the Lost Valley Scouts placed a “Trail Angels” cool chest at the intersection.  It looks like it had some water in it and some other stuff.
(Click on pictures for larger) 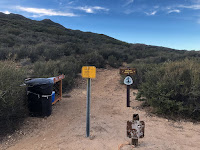 The trail up and back is 4.6 miles.  The 1.8 mile trail leading up to the turn off of the PCT is gentle rising trail to the turn.  Once you turn you have .5 to go to the summit.  It’s fairly easy to lose the trail so keep your eyes open.  The last .3 miles is a real butt kicker due to the steep terrain to the summit.  Be prepared to scramble over some large rocks at the top (if I can do it with a 35lb pack, anyone can).  Once at the top, you get some great views.

On the hike up I was thinking of hiking another peak just a mile west of my car so that I could get a double summit today.  Adam had suggested it but I couldn’t find a published trail up to the summit so it would most likely be a bushwhack.  I got a late start this morning and I promised my wife I would volunteer at my daughter’s choir event so I was a bit pressed for time.  I kept my pace up to full speed and would decide when I got back to the car from this peak since all I need to do was walk the opposite direction on the PCT. 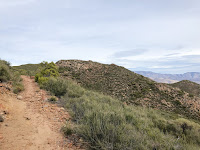 I tried to get some VHF contacts from the summit first.  I figured if I activated with just my HT,  I could be back down the mountain and over to the second summit with time to spare.  As it turned out I only got one, Jeff (K6QCB) in Rancho Cucamonga, so I setup my HF rig and got to work.  Setup was easy, I just leaned the vertical antenna into large scrub and strung out the counterpoise (a long wire that comes off of the shield side of the antenna).  I had cell service so I spotted myself on sotawatch.com and I was off and running.  If I hadn’t had cell service, Jeff offered to spot me (hams are real nice guys, always willing to help out a SOTA activator). 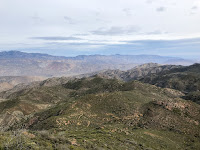 I had a pileup in a matter of minutes and logged 24 contacts in 20 minutes, most on 20 meter and a few on 40 for the local California crowd.  At this point I checked the time and figured I could do the second mountain.  I broke down and loaded up in 5 minutes (the vertical antenna has a quick setup and breakdown).  I figured with a fast descent I could make my time table with a few minutes to spare.  One the way down I left some skin from my right hand on some rocks as a warning to other hikers to be careful in a particular spot.  This is the first header I’ve taken in 301 miles of hiking (this summit put me over 300!).  Assessing the damages quickly, I figured I was still combat ready and soldiered on.  I made it back to the car in about an hour.  I stopped to grab my cell phone battery case and some food, then headed out to summit 5863 (W6/SD-024 - 5863). 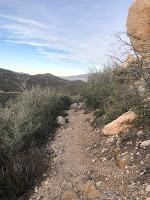 The PCT trail to the south was technically easy, with a gentle up and down to the point where I turned off.  I had planned an attack of this summit from the west but as I passed by a small ravine it looked passable and might save me some time.  It looked like it had less chaparral so I was sucked into going up that way.  I’ve learned not to use the revene’s too much since they collect water and therefore can have some really heavy & dense overgrowth with beastly terrain (rocks and other crap).  I headed up toward a saddle between this peak and my destination,  planning a trip along the ridgeline (see green amended plan on the chart).

This is where the fun began.  As you can see from the chart it’s pretty steep when if you turn off the PCT at this point or the planned route.  The chaparral turned this into a brutal bushwhack in some areas.  I did find some game trails and was careful not to step on any green or new growth (I call it compassionate bushwhacking).  Bushwhacking really slows you down since you go a 20 to 60 feet and then re-evaluate your course, terrain, desired course, the amount of bush in each direction, and looking for natural drainage or animal trails.  During this fun experience, the bush is doing it darndest to grab you and your pack and through you to the ground. 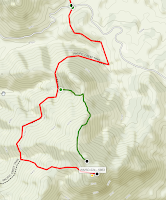 I was pretty tapped-out once I reached the summit right next to the coordinates of the main peak (within 100 yards for sure).  I was within 30 vertical feet of the peak but I wasn’t going to go down and back up through what looked like maximum bush to get there.  I was legally in the activation zone.  I was hoping for a quick VHF activation with my HT.  I had no cell service to spot myself so I called my pals on the Mt. Woodsen repeater to see if I could get a simplex contact (radio to radio without repeater) which is required for SOTA.  My buddy Daniel (KJ6SJY) tried for me but no joy.  My friend Adam also answered my help request and we could barely get each other but we connected.  Now I just needed three more contacts... so it was back to setting up the HF rig.  This would be faster than rustling up more people to give it a try.  I had a roll-up J-Pole antenna for my HT that I could have gotten out but that would have just burned up more time.

The HF radio and antenna setup was like before, and since there was no wind, I was up and working in under 10 minutes.  Adam spotted me at 14.277MHz while I was setting up and it worked out perfectly.  Adam told me about another Ham that was on a summit but I must have missed him.  I tuned over to 14.277 and quickly got my old favorites, Gary (W0MNA),  Martha (W0ERI) and a couple of others with a bonus, John in New Zealand, ZL1BYZ.  Summit ACTIVATED!  I took any other chasers that wanted the points and then packed up.  I didn’t have time to try 40 or 17 because I had to bug out and get back to the car and down to my appointment.  The descent meant another bushwhack and it didn’t disappoint.  The terrain pulled me a bit off course to the east as I headed to the saddle. I was able to  make it down this peak to the PCT without crashing so I’ll chalk that up as a win.

The bushwhacking combined with the time table took a lot of the fun out of it.  Although I get a sense of accomplishment out of it, but I was torched.  The contact to New Zealand was a good consolation prize.   I’ll skip this next time.  Maybe Adam will want to do a double and I’ll just call him from the other peak.  I exchanged some messages with KX6A via a slack group that we have for SoCal SOTA.  Michael was number 3 to summit this mountain on 20-May, 2017.  He hated it.  As his BLOG entry goes “Once you leave the PCT there is NO trail, no use trail, no game trail, nothing.  It is 100% bushwacking and bush navigating.”  I was number 4 on this peak today and it almost seemed as though Michael’s summit was worse than mine.  Although I found a few animal trails, I usually lost them after 20 yards or so.

One final side-note.  I am amazed at how accurate the Alltrails charting system is.  The route that I had charted to Combs Peak had a distance that matched my GPS distance exactly.