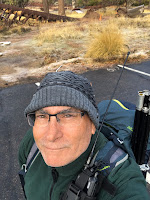 After not being able to hike last weekend due to a cold which lingered into the week and therefore keeping me from riding my bike to work,  I was really itching to get out for a hike.  It rained yesterday and it’s forecast to rain most of the week.... Today was they day to hit the hills.  I wanted something up in the mountains and a decent hike so Cuyamaca Peak (W6/CC-014 - Cuyamaca Peak) was the mission.  I was concerned about the amount of snow they might have on the hill given the recent storm.  I didn’t want to be in deep snow but a light amount would be OK.  I have these things called Yaktrax that give you extra traction if needed.  I also had a couple of alternate peaks picked out at lower elevations.  I checked the cameras in the area and it looked like it didn’t even snow although I know they got some.
(Click on pictures for larger, see video below) 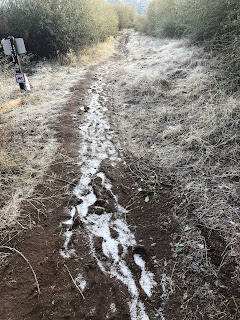 I got an early enough start and was in the parking lot at 8:30.  Stepping out of the car, it was darn cold.  I resisted adding another layer (I had 3 on) figuring I would warm once I got underway.  I was right.  The ground was frozen which is much better than the alternative, mud.  Given the precipitation I could tell the area was pretty muddy yesterday.  I wanted to come back the way I headed up rather than the fire road but I nixed that, figuring it would be muddy on the way back.

I really enjoyed this hike, especially because a part of it runs next to a stream.  I love the sound of running water.  I was on the lookout for ice.  My SOTA Yoda recommended that I pack some microspikes.  All I had were some Yaktrax that I had purchased for a Grand Canyon trip just in case.  Had we arrived at the canyon a week earlier we might have needed them in a few places.  I did some more research on both Yaktrax and microspikes since I hadn’t used the Yaktrax.  Turns out the consensus on the Internet was that Yaktrax are great in the city, shoveling snow, no good for hiking.  I figured I could get by and if I needed them it would be a good test.  A little more than half way up I decided I could try them  There was about  an inch of hard pack snow up the trail when I was about 3/4 the way up so it was a good test.  I mounted the Yaktrax and quickly found out why they are not recommended for this kind of hiking.  These do a good job of light gripping and are better than nothing but I don’t think they would do well on solid ice or in a steep climb.  The toe piece kept rolling up and over my boot and the back popped off at one point.  I will say they are better than nothing and are lighter than the microspikes.  I ended up stopping by REI on the way home and buying some microspikes after talking to a guy there that used them and then seeing how they grip the boot.  I’ll be ready for next week since I expect more snow in the area. 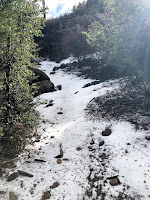 It wasn’t too cool and when I reached the summit there was only a slight breeze.  There was a huge crowd from TJ hiking today and they were at the far end of the summit so I setup next to two giant new towers.  They had one up there before but these monster ones are new.  I’m guessing they are getting ready to lease spots to repeater owners for public safety and other uses.

Setup was quick as I was able to use a old support up there for my antenna.  I’m guessing that between the power lines and other RF it wasn’t the best position but it worked.  The 20 meter contacts were hard to hear but I got quite a few.  There were a lot of contacts complaining about bad interference.  I think there was a big station in the midwest running that I couldn’t hear.  I eventually switched to 40 m and that actually went a lot better noise wise.  I got quite a few CA guys in the area on 40. 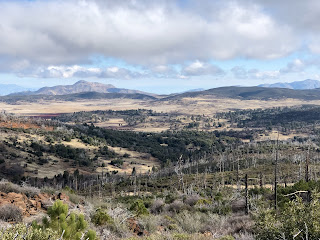 Lastly, I fired up 146.520.  I had only one contact there.  I called my friend Brian, KC2GNV, the DMR master in North Park.  We had talked before about  doing some digital voice direct testing which we did when I was on another peak.  We fired up DMR simplex (not using a repeater) and compared it to analog.  It was amazing to hear the difference.  He was using his HT, just like mine, from inside his house with a squat little antenna.  The voice quality on digital was like he was in a studio.  We could hear each other well enough on analog but it wasn’t even close quality wise.  (Check out the Youtube video that I included).  We weren’t supper far apart and we must have had good line of sight but the performance was amazing.  We also involved KK6YAE in the testing from Spring Valley with the same results.  Thanks Brian and Paul, that was fun and a great experiment.  We’ll be doing more of that. 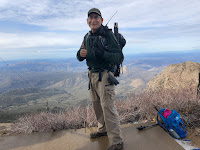 After playing around with DMR, I hit the road back to the bottom.  It’s a quick two miles down but on mostly pavement but no enjoyable on the feet.  I went over to my favorite mexican place in Descanso and relaxed with some carnitas tacos and some hot tea.

All in all it was a lot of fun, and crunching around on the snowpack brought back some nice memories.  I learned more about hiking and radios and it got some nice vistas in with it.  More importantly, I finally was able to get some exercise.  This hike isn’t strenuous but is very enjoyable 7.8 miles.  (see route here).   One funny note, I made the exact same mistake as last time, turning left at an intersection rather than right since it is sort of counterintuitive to turn away from the mountain. 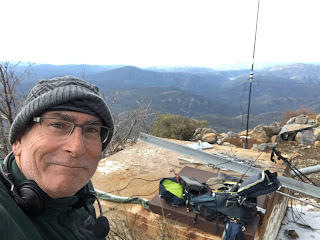 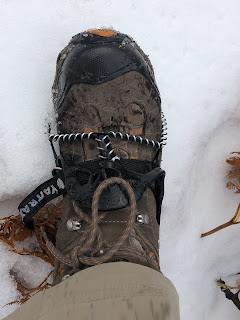 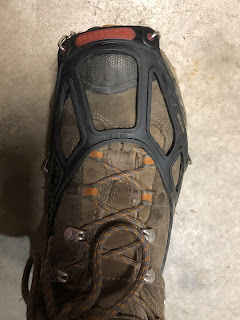 (Yaktrax on the left, MICROspike on the right)