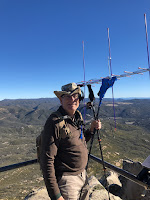 Today I decided to hike Eagle Peak (W6/SC-156 - Eagle Peak) and Stonewall Peak (W6/SC-029 - Stonewall Peak).  Both of these hikes are pretty easy and not too far apart.  I thought about doing Middle Peak and then Stonewall because they are very close together but I really didn’t feel like hitting Middle Peak today given that I’m still suffering PTSD from the last time I went up there and bushwhacked from the west side (Adam says there’s a trail from the east side so I will eventually check that out).  I did these two summits at the same time last year so I was fairly familiar with the IAF and routes.  Last year it had just quick snowing on the way to Eagle Peak parking lot and when I started down for the car from Stonewall, it started snowing again.  I remember really being cold last year up on Stonewall, making some hot tea as soon as I got to the car.

It had been raining this week in San Diego so I was a little worried that it would be muddy up at Eagle Peak but, as it turns out, it wasn’t.  We had clear skies and it warmed up quickly.  I started the hike with three layers on and was down to one by the time I got back to the car.  This is a easy hike and the final ascent isn’t all that hard.  There is one place you have to sort of scramble over some rocks but you can actually avoid that if you hook around the north east side at the first false summit. 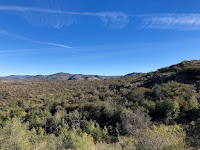 The wind was howling on the drive up to the area of operation and it took some effort to keep the car on the road as I went up the interstate through Alpine.  It was pretty windy at the parking lot, picking up dirt at time and throwing it into your face.  And speaking of the parking lot, it was locked, probably due to the shutdown caused by our man-baby president (code name “Orange October).  I was expecting a very windy summit but the wind died down as soon as I got the antenna up.  Setup was easy and I was launching RF into space in short order.  I knew there was going to be a VHF contest in the US today but I was unaware of the “North American QSO Party” was running today.  The 20 meter band was packed with guys in the contest so it was very hard to find a spot to park at.  I could have just dialed around and hooked up with some guys that were contesting, which I did for a while, but I had put an “alert” on the SOTA web site so I felt obligated to setup and then post a “spot”.  I settled on 14.323 and quickly had a pileup of chasers.  I had the usual suspects in the logbook in short order as well as a bunus, John (ZL1BYZ) from New Zealand. 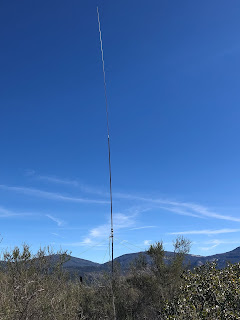 With Eagle Peak checked off the list I headed over to Stonewall Peak (just across the street from Cuyamaca where I was last week.  Because there was a VHF contest going on I decided to just bring my little HT and a directional antenna.  This means I can use my mini-pack and haul less than 10 pounds instead of 35).  I packed an extra layer for the wind at the top and headed out, quickly forgetting my trekking poles which I had to turn around and go get.  You don’t need trekking poles for either of these hikes but I grabbed a big pipe fitting and was planning on mounting the directional antenna on one of the treking poles and then strapping the whole thing to the rail at the top.  I didn’t have time to make a mount this morning and it was going to look pretty frankenstein but workable.

It was an easy hike to the top.  I stopped at an area just below the stairs to assemble the antenna.  I was planning on testing 2 meter and 70 cm so I had to assemble all of the little pieces.  It takes a while since they didn’t mark the elements that screw into the mast.  I like the antenna because it breaks down and goes nicely into a little bag though.  I’ll mark the elements with colored tape next time to make my job easier.

Once the antenna was assembled and then taped to one of my trekking poles,  I headed up to the top, and just as I got to the stairs my Gopro battery died.  I was afraid I would but I can’t find my spare batteries.... The wind was howling at the top and I then wished I had packed two layers extra and put them in my bag.  I had already put on the one that I did pack while assembling the antenna but it wasn’t enough.  I then spent the next 10 or so minutes screwing around getting the directional antenna lashed to the railing so I didn’t have to hold it.  The problem with this thing is that it’s designed to be held and if all I’m doing is pressing the push to talk (PTT), and pointing the antenna then no problem, but I also have to write down call signs so I can officially activate the peak.  Also the antenna gets heavy after a while.

My first contact on Stonewall was from a lady on Thomas Mountain (W6/CT-016 - Thomas Mountain) in the Anza desert.  The beam antenna brought her in loud and clear.  She was up there with her husband.  I later got a call from Adam, K6ARK and he thinks he did some CW with her husband who was up there with her.  The summit to summit distance was 46 miles.  That’s not bad using my little hand held radio at 6 watts.  But wait, it get’s better.  I also made contact with someone in San Pedro in the Los Angeles area which is 110 miles from where I was.  We were both pretty surprised.  My last VHF contact was the husband of the first operator that I talked to on Thomas Mountain.

After being on the summit in the high winds, which were at times gusting to 40, I was getting very chilled and my back and fingers were cramping up.  I used painter’s tape to secure the antenna to the rail so it wouldn’t leave any marks and it was easy to remove and get off the summit.  I climbed down to a spot with no wind, packed up and headed back to the car.  Even with the VHF contest going on, it wasn’t easy to get contacts up there.  Setting up a HF antenna has to be done away from the tippy top given the number of people that are up there.  It would be kind of cool to try my vertical HF antenna up there though.

I hadn’t eaten anything other than trail bars for the day so I was hungry.  I stopped at my favorite Mexican food restaurant in Descanso and then headed home.

So there you have it.  Someone mentioned that I should continue shooting video so, here you go, a VLOG with the BLOG.