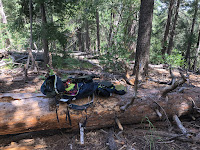 Today’s expedition takes me to a couple of summits in Arizona, Wishbone Mountain (W7A/AP-027) and Cerro Gordo (W7A/AE-021) on the Apache India Reservation (permit required).  Getting to my plained ingress onto the summit via my dad’s truck was an adventure.  I had mapped out a route, followed it and then sorta got lost trying to figure out why the road was angling off the wrong way.  I back tracked and found a turn, wrong one, back tracked and found the correct turn.  Unfortunately 50 feet from that correct turn was a fence blocking the continuation of the road with no gate.  I have a feeling this was done at the request of the Apache Indian Tribe as I may have been at the border.
[Click on images for larger]

All of this goofing around added at-least 45 minutes onto the trip.  I wanted to get a double summit in before the thunderstorms came so I had to solve this.  I was about a mile from my planned trail head so I parked, went over the forest service fence and headed up the road.  There was an elk in the area bugling.... Ahhhh, so nice.  I will say that I got lucky by coming in from this direction.  It was easier to walk in from this fence than it would have been from the other direction.

Although I charted out a trail I found that I could avoid some up/down by moving a little more to the east side of the mountain and then head up a ridge to the summit.

This is day 2 at altitude for me.  I figured getting on the bike for the first three days of the week to ride to work and then a massive workout on the ladder on day 1 as I painted some beams on the house would get me in shape (and a day to acclimate).  Unfortunately, no such luck. I took a direct route up to a ridge line and up to the summit.  Hiking at 8,500+ feet is a real grinder until you are acclimated.  I hadn’t been riding my bike the last few weeks (until this week) because of my leg injury.  Although I could have ridden, I didn’t want to compromise my immune system while I was trying to get over the infection that had set into that sucker.  The site of the injury is still tender after about 4 weeks, which is kind of surprising but I’m pretty much combat ready. (You can read how I skewered my leg on Turner peak here.). 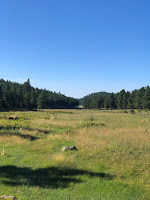 One on top of wishbone, the setup was easy and I had an excellent operating position in the shade.  This is an interesting peak because all you can see are trees, not much of a view.  I think if I had ventured to the west there might have been a pretty good view but I was a little behind schedule and decided to desummit directly after answering all the chasers.
I had no cell service so I used my satellite communication unit to spot myself and asked another ham to help me out with a spot in case it didn’t go out.  The contacts quickly rolled in and I had this one activated.

The descent was easy given the forest floor and I was back at the tuck in under an hour.  The thunderstorms were south-east of me so I decided to see if I could activate Cerro Gordo which was pretty close to where I parked.. 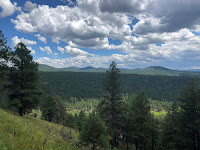 There is a road that goes up to the summit but about a mile in it’s blocked by a massive aspen log that had fallen.  I parked and headed out.  As you can see on the route I took for this summit, you can follow the road all the way to the top but the switchbacks, it probably adds at least a mile.  Once I found a spot that wasn’t straight up, I took a more direct route and joined the road for the final mile.

This a bear of a climb and I was starting to wonder if this was really any faster.  It was technically easy but steep.  Once on the summit I could see the thunderstorms moving toward me so I hastily setup and sent a spot out via the satellite communicator again.  I had AT&T voice but no data. 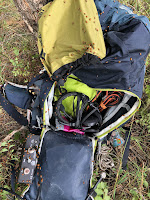 After setting up my antenna, I came back to a pack that was covered in lady bugs.  They don't really bother anything, it was kind of cool.  My spot went out quickly and I was working a pileup of chasers trying to get their points.  A couple of thunderstorms were moving toward me so I unfortunately had to cut it off before I could work the pileup down to zero.  I felt bad about doing that but given I had a lightning rod up not far from me, I figured I should break it down.

After a quick break down, I was headed out.  I made it to the truck before it started raining and, actually the storm more or less dissipated.  I could have stayed but you make the best decisions you can and move on.  With this particular activation, I may get logged as the first activator.

I really wanted to do some chasing myself, try a little more CW but without cell service, that wasn’t going to work.  It would be cool to have a service that would respond with a list when I send a SMS via my sat comm unit. 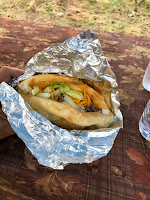 I was worn out from the two summits, and the rough roads in a 30+ year old pickup didn’t help.  On the way, I stopped at a road side kitchen and picked up a “Navaho Taco”.  It’s a taco but instead of a tortilla, they use fried bread.  I love those.  The thing was massive, and even though I hadn’t really eaten anything other than a bar all day, I couldn’t finish it.

I was happy to get home, take a shower and a nap.  Now, as I write this while on my deck at the summer home, it’s 55F, light rain with some thunder overhead, and I can hear elk not too far away bugling.  There’s a baby elk out there squeaking as well. 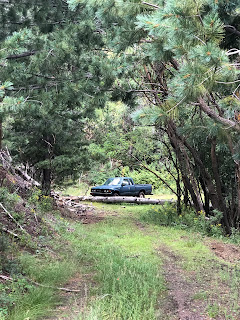 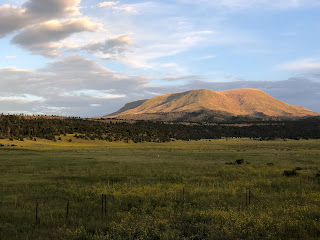