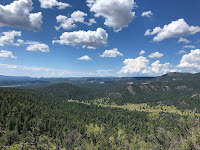 My original plan for today was to not hike, kick around the cabin, meditate, and then watch the rain come down... Then I started thinking about how I might be able to do both.   At about 9 I decided to jump over to New Mexico to activate a summit that had never been activated, Red Butte (W5N/AP-035).

The drive over to the planned trailhead took about 45 minutes from the SOC (Sota Operations Center, AKA my cabin), and it was a beautiful drive through the national forest.   The initial route up is charted HERE and the IAF (turn onto a road) at 33.92855, -108.9152.  There is a jeep trail that actually took me up past half way to the summit.  The truck has four-wheel-drive which was needed only in one spot.  It ends at a large clearing.  I passed some guys on the way down.  I think they were target practicing up against the hillside there.  It’s actually a good place to do that.
[click on image for larger] 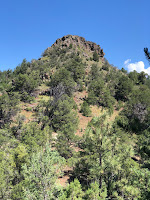 I hiked up a much worse jeep trail and then realized when I hit a summit, I had a little more climbing to do.  I went up and over the false summit over to the actual high-point. I setup about 20 feet below a very rugged, small rock plateau.  I couldn’t find a safe place to get up there with a pack on since I planned to keep the risk a little lower this trip :).  Setting up at that location with the radio would have been a nogo anyway as it wasn’t big enough.

Once setup, I fired up the radio.  While I was waiting for my spot to go out on the sat com unit, I answered a CQ from a guy in Tennessee who was working a contest.  Once my spot went out for 14.284 MHz from the satellite communicator, I had a small pileup. 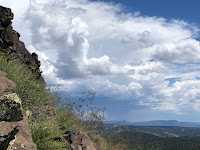 I had a bit of shade and it wasn’t too hot, but the weather was starting to move in.  I worked the pileup down to zero and then thought I would try 7 MHz.  I sent a spot out via the Inreach but it was taking way too long, I wasn’t getting any hits on my CQ, and I was getting hungry.  I had 14 contacts so not a bad day.  I could have snacked but I was looking forward to lunch in Alpine.

I found a better route back to the truck so if you do this summit. I suggest you follow my lead on this one and stay south of the little false summit as you head over to the activation zone.. 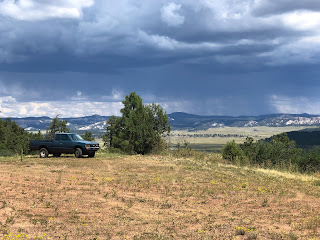 I stopped in Alpine at the Bear Wallow and had a late lunch at about two.  As I was having my apple raisin pie, I could see the lightning bolts coming down on the other side of the mountain where the SOC is located.  The windshield wipers in the truck really suck so I thought it best to get home.... And just in time...

As I sit out on the front deck of my cabin writing this, it’s pouring rain and hail, and we are having one hell of an electrical storm.  A real banger.  With the water gurgling down the gutter system, a light breeze and rain, I just want to take a nap now.  In fact, I think that’s what I’ll do.