This weekend may be the last chance that I can activate up in the San Gabriels in 2019.  A storm is moving in and will most likely dump quite a bit of snow, making the trails on San Gabriel (W6/CT-019) and Occidental (W6/CT-098) too treacherous to pass until it melts next year due to the narrow path on a very steep hillside.  A couple of hams that I’m acquainted with went up there on Friday, so I figured it was still open, meaning no deep snow and ice.  Adam, K6ARK mentioned he was willing to go on Saturday so we decided to link up at my house and depart at about 0530 PST.  Adam was right on time and we quickly launched after loading our packs into my car.
(click on image for larger)  (Updated and replaced pixi radio with Rockmite )

The drive up took a little over two hours.  Both mountains are next to Mt. Williams which is packed with antennas (route here).

We hiked up via a well worn trail that’s cut into the hillside.  A stumble could send you tumbling a long way down.  The winds were at about 15 to 20 kts at the top making it cold.  I setup the antenna mast at the top and then tucked down the hill a bit.  While I was setting up I worked a few stations on my HT and asked one of them to spot me on SOTAwatch.org.  I worked a pretty big pileup on 20 meter and bugged out with after working 33 stations, most of them on 20 meters.  (Take a look at the track to the right and you’ll notice Occidental Peak in the lower right corner.)

Adam was on the windy side of the mountain.  Although not in the wind he was in the shade and got chilled.  I broke out the jetboil stove and we had hot drinks in about two minutes.  While Adam warmed up, I packed up my antenna and then joined him with some hot tea.  We de-summited and reached the car in probably 30 minutes or less.

The drive to the Occidental trail head took about 5 to 10 minutes.  We parked just outside of the antenna farm on Mt. Williams. It’s a funky hike with only 400 feet of elevation gain from where we parked.  There is a ridge from Mt. Williams but the hiking path is along the eastern side of that.  It does follow the ridge for a while, which is only 15 feet wide in places.  It was pretty easy to follow the path but it was mostly loose loamy dirt, a nice change from the hard granite.

I spent way too long looking for a place to setup the antenna.  Adam was setup on the peak and I worked to find a place down the ridge to put the antenna away from him.  I didn’t have cell service to spot myself and I then screwed around calling CQ without a spot.  My gear was kinda spread out with my pack on the ridge and my operating position down below that out of the wind.  I got a tad chilled so I went up, made some hot tea and then sent a spot out using my sat comm device (Garmin Inreach).  By the time I got back to the radio the frequency was taken over by some guys shooting the shit.  I had several VHF contacts with the HT and did manage one on 20 meter SSB and another via CW so the summit was activated with points.  I was just getting ready to respot when Adam came by and I decided to call it a day.  I didn’t get a whole lot of contacts on this one but I had a blast on the last one. 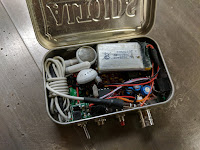 Adam activated using his Rockmite radio, that is CW only and is 0.3 watts!  The Rockmite radio is in an Altoids can and has a built in keyer with touch sensitive “paddles”.  The the ultra light setup for geeks that love to hike and it worked awesomely.  He also broke out his custom QCX unit and got some contacts on that.

The walk back to the car was probably 20 to 30 minutes.  We loaded up and went down the Angeles Crest Highway into La Canada Flintridge and had some of the best burgers to date at North Shore Burgers.  That pretty much topped off an epic day in the mountains.  The hikes were short but rewarding.

Below is a video by K6ARK of our trip.  Check it out.