With travel and rain, I haven’t been able to get out for a few weeks, but the forecast for this weekend was sunny skies.  Itching to get out, I headed over to Combs Peak, located in the Anza Borego area.  The drive is a bit long, about an hour from my house on the other side of Temecula.

I had thought about hitting this peak and another one about 3 miles away.  I did that last year and the down side is that I really had to hustle to get it finished by sun down, the second one is a vicious bushwhack and not as much fun..  After watching several episodes of "Sailing Uma", a fantastic yachting VLOG I took Capt. Dan's mantra and made it my own, "I'm not in a hurry to get anywhere".  I decided to scrub the second peak and took Sulu with me since it would be shorter.  When the dog sees me with my hiking boots on, she get excited.  WOW, what a joy it was to not be rushing around. 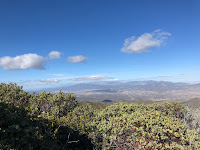 I took my time on this hike, stopped often to look around to enjoy the views, and once on the summit, really spent some time on the radio working contacts coast to coast.  I also put my CW skills to the test on this expedition.  I gotta say, the lazy hike was a great move.  Less stress and a lot more fun.  It’s funny that I have to stress out on the trail when the whole point is to de-stress.  Go figure.

When I got to the trailhead it was a cool 42 F and partly cloudy.  I was tempted to put on another layer but once I got hiking, I warmed up.  The hike starts where an access road crosses the Pacific Crest Trail (PCT).  Things are green and the trail was damp.  We’ve had a few good rain storms pass through in the last month and there’s been drizzle up there this past week.  The chaparral was damp and it soaked my pants as I brushed by.  I enjoyed this section of the PCT.  After 2 miles on the PCT, I hung a left and headed up a ridge to the summit.  There is a trail but it’s easy to get off of it.

Once on top there were great views in all directions.  The San Gabriels were covered in snow.  Evidently it’s chest deep up by Baldy.  The clouds were starting to dissipate but it was windy, which will chilled me.  I guess it may have warmed a tad, say 45 F but with the wind at a minimum of 15 kts, putting the windchill at ~38F.  I setup my operating position just off of the summit out of the wind 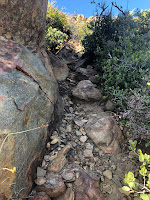 Antenna setup was easy and I was up and running on 14 MHz in no time.  After I spotted myself, I had a good pileup working.  I wasn’t in a hurry, relaxed and worked the pileup down had a few words with operators across the country.  Gary, W0MNA said it was snowing in Leavenworth, KS, and his wife gave me a better signal report (probably because I remembered to tune the antenna, not because she likes me).  Propagation was good, as most of my signal reports were strong.  Once I was done with 14, I went to 7MHz.  I worked up a lot of stations in California, and Arizona, and Oregon on this band.  After talking to my friend Adam, K7ARK, he convinced me to try CW.

As many know, I’ve been working to learn CW and it’s one of my HAM 2019 goals.  I took a class in April but was studying before that.  I know CW now but my copy speed really sucks and I was hesitant to spot myself on SOTA mainly because I wouldn’t be able to work a pileup.  I had a summit-to-summit on CW that I initiated earlier but this is the FIRST time I’ve spotted with CW.  I butchered some call signs, but copied quite a few on the first try.  This is quite satisfying.  I worked 12 stations on CW and then bugged out.  I had to get home, eat, and then go watch a soccer game with my friend Bill.

The trip off the mountain was enjoyable and it was nice to be able to take it at a leisurely pace knowing I was done for the day.  On future hikes, I’m going to bring my jetboil for some hot tea or bring a thermos of it.  If I hadn’t been able to get out of the wind it would have been darn cold.  As it was, I sat in the sun a little too long but was comfy.

Unless I know the trail is easy, Sulu is going to have to stay home.  She’s kinda reached her limit today.  I had to lift her up on a pretty narrow large step that she couldn’t figure out how to circumnavigate.  I helped her off as well on the way back.  The poor thing looked kinda pooped today.

I’m really happy with my current loadout.  Having the pack 9 - 10 lbs lighter really makes this a perfect setup now.  I’m looking forward to the next one.