Winlink Station in a Backpack 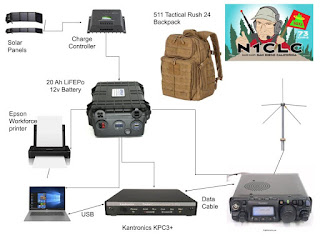 The Amateur Radio Emergency Response (ARES) team met this week and wanted members like myself to give a quick demo of their Winlink radio stations.  I built one a while back for supporting the ARES mission that fits in a backpack. Not everyone has built a station for doing this and I’m guessing they are hoping more people on the team build one.  This isn't the best setup but it works and you could use the diagram to the right as a sort of reference design.  The solar kit is a bonus and the backpack is, well, my style.

The ARES team in San Diego uses Winlink email to support hospitals and other organizations in times of an emergency.  Should a disaster strike, like an earthquake, normal communications like phone and internet may not work.  When that infrastructure failes, radio is the only game in town.  Organizations can use the ARES team as one of the methods to communicate  inter-hospital or with other agencies, like blood banks or FEMA offices.

You may be wondering what Winlink is.  It’s basically an email package for the PC that is designed to send messages using radio.  Much of the focus of Winlink is to support  emergency communications but it’s also used heavily by mariners.  The Winlink development team has made it easy to send messages within the Incident Command System (ICS) used by FEMA because many of the standard ICS message forms can be called up within a template.  Users fill out the template and send the message.  For example, the San Diego Hospital Status report template makes it easy for a hospital to communicate their status to the County Medical Operations Center during an emergency.  Other forms may be used to request blood from the blood bank, or diesel for an emergency power generator from the logistics section of FEMA.  ARES can transmit all of these messages and more via voice, but being able to do this via email is the most practical approach due to the increased accuracy and the ability of agencies to easily forward messages that are already in electronic form.

Although Winlink can be used by anyone, it’s heavily used by ARES and government organizations during disasters.  You will find ARES and other teams supporting disasters like in Puerto Rico after a hurricane, or fires in California and Mexico. 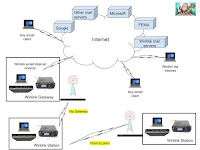 How Does Winlink Work?

The Winlink application can be installed on any PC computer.   After preparing a message using standard “to” field, subject and a body (the body could be the result of a built-in form being filled out) the message is placed in the outbox.  Then the operator initiates a session with the winlink servers hosted on the internet.  Although the user could use “telnet” if they have an internet connection, they can also use a variety of methods that use radio, the primary reason for Winlink.  ARES members are ham radio operators and typically use some form of digital radio method to send and receive messages.  Today, I used a “packet radio” where the laptop is connected to a terminal controller that takes the digital message and converts it to analog for the radio.  It then uses the radio to send and receive messages to a station that is configured to receive Winlink messages.  That station uses the internet to relay message via the internet to any standard email address or it may stay within the winlink mail system.  If the receiving station doesn’t have internet access, it will forward the message via radio to another site that hopefully has an internet connection.  If that station doesn’t have internet, it forwards to another station.  Many forwarding stations will use HF radio which can reach stations thousands of miles away.  When sending, the radio sounds like an old school modem that you use to hook to the phone.  As you can see, this could be handy when there is no internet in an affected disaster area.  It allows emergency responders to communicate with supporting agencies, or operators to send health and welfare messages to friends and family. 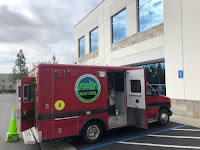 Winlink also supports point to point, or station to station.  So if the Medical Operations Center here has a station ready to receive messages, operators at hospitals could connect directly and send email message traffic directly to it.

For short range hops (30 to 150 miles), operators use multiple methods like VHF packet, VARA and others to send and receive messages.  Today, I was demonstrating my station in a backpack by connecting to a packet station in Tijuana Mexico.

For longer range, hams can use their equipment to send messages anywhere in the world by attaching various types of MODEM like units.  For example, ARES operators in Puerto Rico sent and received email messages using Winlink stations in Texas.

If you’ve ever sent an email with your cell phone (pretty much everyone), you’re doing the exact same thing as I was with my packet radio setup.  Your cell phone in fact has up to 5 separate radios in it with a very complex antenna and front-end processor to run all of the radio frequency signals into it.  You used it as a computer which converts the digital signal into something that can be sent via the cell system, which sent it to another radio receiver (the cell tower) that was connected to the internet and off it went from there.  The only difference is that we ham geeks don’t have to depend on all of the infrastructure that you take for granted.  We can skip over dead areas and get our voice or digital message directly to anyone in the world (sometimes with a little relay). 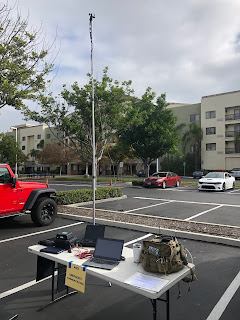 The diagram at the top of this article shows the key components of my station and how they are connected.

That’s it.  If you remove the solar setup, it’s pretty simple (but a steep learning curve). 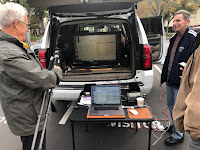 As with everything ham radio, there are zillions of different ways of assembling components to get a Winlink stations up and running.  Many of the stations demonstrating today were using some form of packet radio like me and other stations were using HF radio with Pactor modems connecting to sites in Las Vegas and beyond.

If you are into this sort of thing, you can explore all kinds of options.  For example, I’d like to change the radio out to a 50w unit that I could run continuous in digital mode at say 20 or 30 watts for better range.  I have an Yaesu FTM-100 that I can use but I can’t get the Kantronics unit to talk to it so I’ll have to pick that project up again later.

There you have it, geeks with radios sending email.  Maybe I should have used that for the title.

Email ThisBlogThis!Share to TwitterShare to FacebookShare to Pinterest
Labels: winlink