Today’s objective is to hit a brand new Peak, Cahuilla Mountain, W6/CT-103.  Adam had mentioned that he hadn’t done this one yet and asked if I wanted to come along with him and Johnny.  I did.  The plan was to meet at the trail head at 0800 (1500 zulu) and head up the trail.  Adam rolled out of the rack behind schedule and told me to head up the trail if he wasn’t there yet so I did.  He arrived about 10 or 15 min after I left the parking area but I knew he would catch up with me, which he did about .2 mi from the top. I took my time, stopping a lot to look at the views, and where were fantastic. 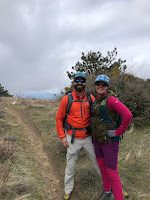 It had been raining the previous days but the forecast for Sunday had a much lower chance of rain with a drying trend.  The trail was damp but because it was a tad sandy soil, it wasn’t bad.  It was partly cloudy and cool when I got to the trail head but I was able to head up with just a base layer and a long sleeve shirt.  I did wear my warmer water resistant pants just in case we ran into snow to keep my legs dry and they are good for keeping the rain water on the brush off of you.  There was no snow, but lots of water on the brush in overgrown areas. I got quite a shower a couple of times.  My sleeves were soaked at one point.  The views were fantastic as I headed up the trail.

Just before Adam and Johnny caught up to me, I started hearing birds in the forest that I’m use to at my mountain cabin in Arizona.  The memory brought a smile to my face and made me happy.

Once at the summit, I setup on the north side and Adam on the south.  The setup was quick and I used the LNR end-fed because it’s a tad longer which allowed me to setup my station right where I wanted.  It was probably one of the best setups I’ve done in a while.

Adam and I coordinated which bands we would work so we wouldn’t interfere with each other. He started on 20m and I went to 40m.  I think he said he logged 13 CW contacts in something like 8 minutes.... (I need to check this).  I jumped on 20m later and got a few there as well.  A breeze started rolling up the north side where I was and chilled me and my fingers wouldn’t do what I wanted them to on the keyer.  It was fun.  I got some video of Adam using his mountain topper with his custom touch keyer.  It’s a sweet setup.  It was time to go and I hadn’t once used
SSB.  This was a CW only activation, possibly my first, I’m not sure.

Our summit was an enjoyable one.  It was colder on the way down but just as pretty.  A lot of times I don’t enjoy the trip down as much as on the way up partly because the magic of discovery is gone but this was different.

This is a hike that I look forward to doing again and again.

For another perspective, see the K6ARK VLOG below 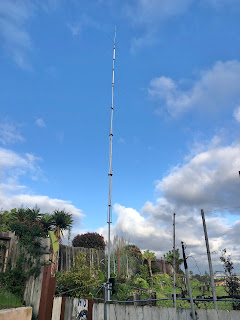